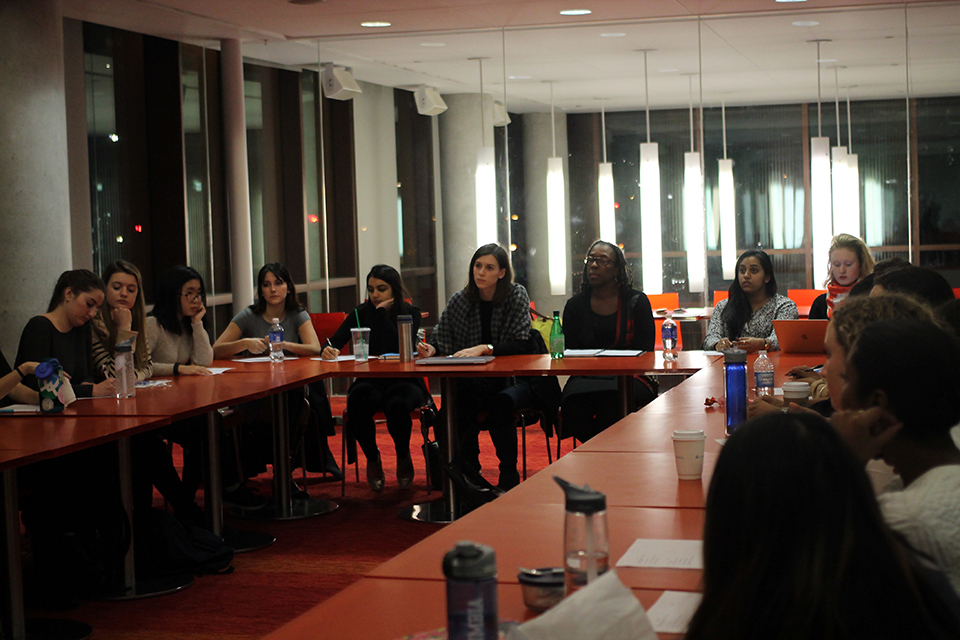 Barnard's SGA heard a presentation from Coalition Against Sexual Violence and discussed proposed constitutional amendments at its general body meeting on Monday.

Following a presentation from Coalition Against Sexual Violence member Abby Porter, CC '17, regarding a proposed policy that would bar students found guilty of gender-based misconduct from serving as teaching assistants, Barnard's Student Government Association will look to bring up the issue with Dean of the College Avis Hinkson.

"We think this is an important policy change because TAs are in a huge position of power at Columbia, whether it be because of grades or interactions with students or basically controlling how a student perceives their experience in class," Porter said.

A Spectator investigation conducted last February had found that students found guilty of gender-based misconduct could serve as TAs, resident assistants, and orientation leaders at Columbia and Barnard. Though Columbia has since implemented a policy that bars such students from serving as RAs, Barnard has not created a policy explicitly barring those found guilty from serving in any student leadership positions.

Porter, who has now presented to all four undergraduate student councils, said that the proposed policy would be enforced similarly to Columbia's policy barring students found guilty of gender-based misconduct from being RAs, in which applicants provide written consent that their FERPA records may be accessed for this specific purpose.

Though a policy at Barnard would likely be implemented differently than one at Columbia College or the School for Engineering and Applied Science, given that Barnard has a separate Title IX office and TA hiring process, council members said they wanted to make sure that the two groups continued to work together on the issue.

"It's important to stress that this is an issue in which we do work together because so many Columbia graduate students and undergraduates are TAs at Barnard," Representative for Arts and Culture Linda Gordon, BC '18, said. "It's important that ours is an across-the-street conversation."

Included was clarificatory language on the council's referendum process and the appointment of the vice president of policy as the point person for overseeing all referenda. Additionally, the default voting threshold would be set to at least 25 percent participation in order for the results to be considered valid, with the stipulation that the threshold could be changed for specific referendums if two-thirds of the representative council voted in favor of the change.

The Student Academic Advisory Committee will be holding an open student-faculty discussion about microaggressions in the classroom on Tuesday at 6:30 p.m. in the Ella Weed Room.

The representative council will be meeting in the Student Leadership Collective office, located in Liz's Place, to discuss Barnard's winter and summer break housing policies this Thursday from 9 p.m. to 10 p.m.

For students who have filled out SGA's Desserts After Dark Survey, Magnolia Bakery cupcakes will be distributed this Tuesday evening from 9 p.m. to 10:30 p.m. Commuters may come to the SLC office from 6 p.m. to 9 p.m. to pick up their dessert prize.

The Student Leadership Dinner nomination form deadline has also been extended to March 21.