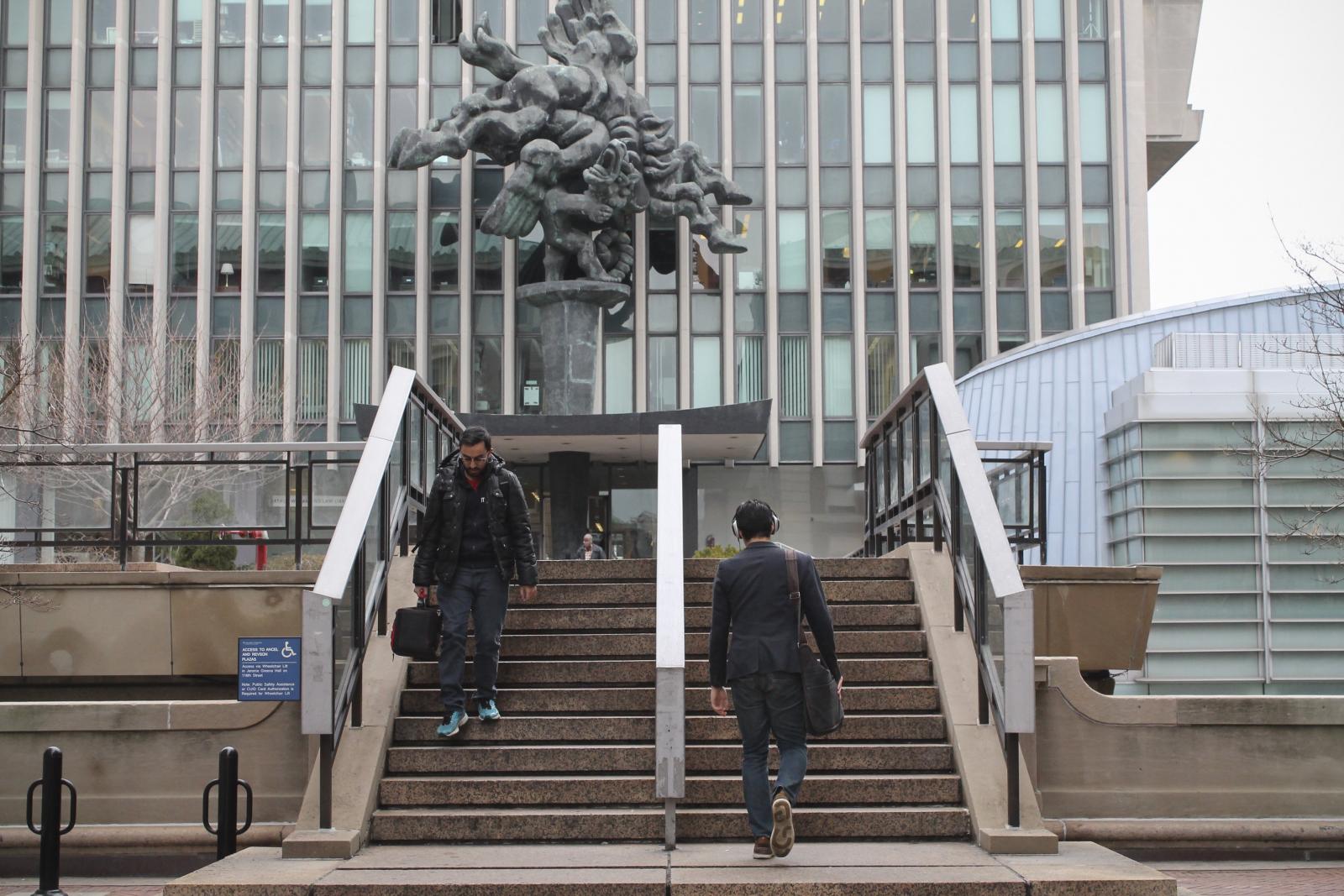 Many academic buildings on campus are inaccessible or barely accessible to students with limited mobility. This is a major concern that could limit the amount of classes these students can take.

In a pamphlet published by the Columbia Office of Undergraduate Admissions, boldfaced blue type above a photo of students sitting on Low Steps declares the University to be a place where students have "the freedom to reach for any goal on a campus, in a city, in a community where shaping society, culture, and the world happens every day."

But according to students with disabilities, this idyllic academic freedom is hampered both by a campus that is partially inaccessible and a community that is often oblivious to disability issues, placing many aspects of Columbia's advertised student experience out of reach.

Students with disabilities said that, while the Office of Disability Services can typically provide adequate accommodations within the classroom, both the geography and architecture of Columbia's campus and a general lack of awareness on the part of administrators, faculty, and other students pose barriers to the degree of academic freedom enjoyed by the majority of students.

"It certainly does feel like I am not getting the education I want to be getting here," Disability Advocacy and Support Network founder Jess Silfa, GS '16, said.

For students with physical disabilities, the foremost obstacle is a lack of accessibility across Columbia's campus. While most academic buildings are wheelchair accessible, many are only accessible through a side entrance, and some—including Pupin Hall, Schermerhorn Hall, and Havemeyer Extension—have entire floors and hallways that are not wheelchair accessible. One building, Mathematics Hall, is entirely inaccessible. 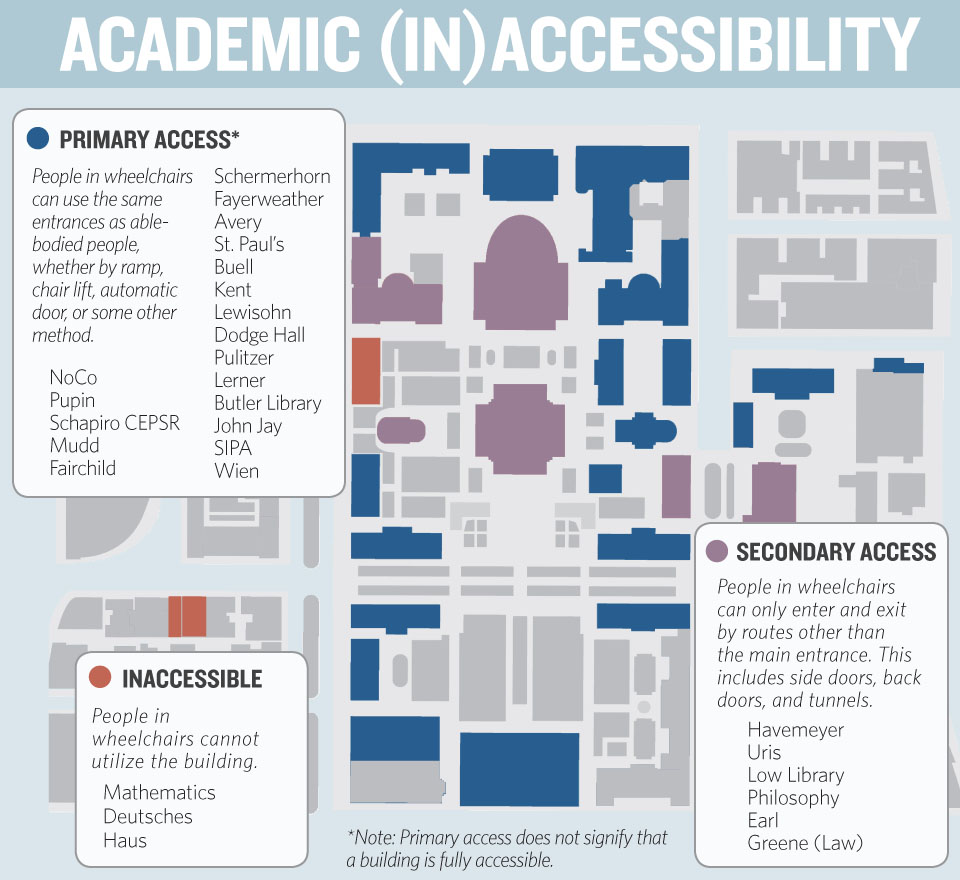 To ensure that students with limited mobility can attend all classes, ODS reviews the schedules of students registered with the office prior to the start of the term and can relocate classes based on student needs, as stated on the ODS website. ODS also attempts to coordinate with Public Safety to ensure that students will have swipe access to all necessary facilities, elevators, and passageways prior to the start of classes.

These accommodations with class location are usually successful, according to Eun Oh, CC '18. But in some cases, Oh said that ODS's support can only go so far, and that the sheer distance between two classes can pose a barrier.

"ODS has its limitations," Oh, who uses a wheelchair, said. "They're doing as much as they can. ... But we know that there are certain limits that we can expect, in terms of distance."

Last semester, Oh was registered for a macroeconomics class, which was originally located in Mathematics Hall. Because the building is inaccessible, ODS relocated the class to Havemeyer. But when Oh tried to attend class, she realized that Havemeyer has no campus-level accessible entrances.

After contacting ODS, Oh was told she would need to enter Northwest Corner, take the lab elevators to the ninth floor, traverse the skybridge to Chandler Hall, take a passageway from Chandler into Havemeyer, and then take two elevators within Havemeyer to reach her classroom. 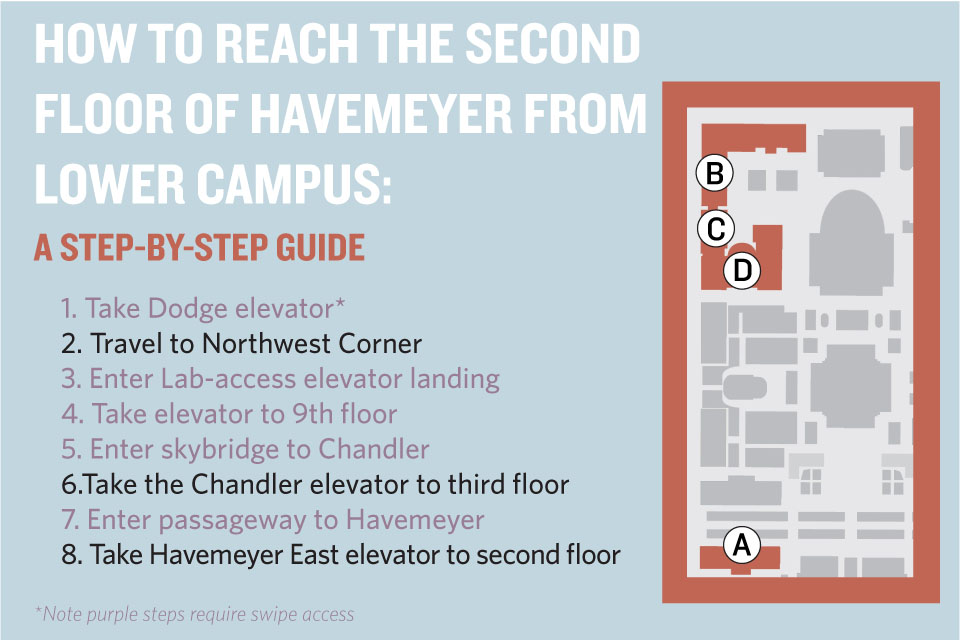 But as she attempted to make this trip, Oh said she realized that nearly every step—including the elevator, skybridge, and passageway within Chandler—required swipe access that she did not have, despite the fact that ODS had already requested that Public Safety give her access.

"At that point, I called my coordinator right away and told her I can't get in. And she's like, 'You should have access there.' And she's like, 'I'll find you,'" Oh said. "She tried to walk through also, but she didn't have access either. So we had to head back to ODS and actually tell Public Safety to grant access, and then I made it back to Havemeyer after I got access."

By the time Oh reached the classroom that day, her class had ended. Oh eventually decided to drop the class, which she said was due to the fact that she only had 15 minutes to get to Havemeyer after her prior class ended.

Silfa, who walks with a cane, agreed that distance between classes can make attending a class unfeasible, despite efforts by ODS.

"I've had to think to myself, 'Can I really get from Schermerhorn over to Milbank in 15 minutes?' There's not a chance in hell, so I have to drop one of those classes even though I really want to take it," Silfa said.

And while ODS is responsible for ensuring students with disabilities can attend classes, Silfa pointed out that many extracurricular events on campus are held in inaccessible spaces, or spaces that require swipe access far in advance.

Christopher Baswell, a professor of English at both Barnard and Columbia, confirmed that many events hosted at Columbia take place in buildings that are inaccessible or only secondarily accessible.

Baswell, who uses a wheelchair, said many events often take place in Deutsches Haus and Casa Hispánica, which are not wheelchair accessible. For events hosted at the Heyman Center, Baswell said he has to call before arriving to ask staff to open the only accessible entrance, which is typically locked for security reasons.

According to Baswell, obstacles like Heyman's locked doors and elevators that require swipe access—which, even when granted, expires after a year—reflect a "policy problem."

Students with disabilities also said that the temporary black steel ramps set up over stone steps throughout campus are unreliably accessible and break often, requiring periodical repairs and replacement.

"I want to get rid of every single black temporary ramp on this campus," Oh said. "There's holes in it by a half semester, and they usually put metal plates to get the hole covered up. That's very unrealistic."

When reached for comment, a spokesperson for Columbia Facilities and Operations said that Executive Vice President for Facilities David Greenberg, Executive Vice President for Finance Anne Sullivan, and Provost John Coatsworth are planning to increase accessibility in campus routes, building entrances, and restrooms, but did not refer to any specific upcoming measures.

"While many improvements have been made, we recognize there remains more to do. We are committed to finding long-term solutions as we enhance this century-old campus," the statement said.

But obstacles to a complete academic experience extend beyond the physical accessibility of Columbia's campus. For Dylan Kapit, BC '17, many faculty seem generally unaware of students with disabilities, and some have refused to accommodate Kapit's mental disabilities in the past.

"If you email a professor and say, 'I have the flu,' they're like, 'Oh, stay home, take care of yourself.' But professors don't ever understand that I need to stay home because I'm having a mental health crisis and today's the day that I need to take a little longer to write my paper," Kapit said. "They just don't get it."

In one case, Kapit said that a professor they had for an environmental science class refused to allow Kapit to take the test in a separate room, even after Kapit explained that their mental disability required such an accommodation.

"I ended up just taking the test in the room [with all other students], and I didn't do so well," Kapit said. "I talked to him and I was like, 'Look, I told you I wasn't going to do well. ... It's not like I didn't try, just this is not my ideal testing environment, and I needed something from you and you refused to give it to me.'"

Silfa also said she has had experiences with faculty who were reluctant to accommodate her disability. In some cases, Silfa has had to ask professors to relocate office hours or review sessions held in inaccessible locations.

"Some of them are like, 'No, I'm so busy I can't do that for you.' Some of them are put off. And some of them on the flip side have been very welcoming to it. But I think that they still don't understand why I even request that," Silfa said. "Faculty kind of does what faculty wants."

Oh agreed that professors frequently schedule office hours in inaccessible locations, and said that she believes this stems from a lack of awareness. In some cases, faculty have agreed to meet her in more accessible locations. Other times, when possible, Oh said she has left her wheelchair to walk down steps to offices.

"Professors actually don't know that their buildings aren't accessible because they can walk down the stairs just fine," Oh said. "I want to be accommodating as much as I could to them as they are accommodating for me. It's a half-half, giving and taking game sometimes. We have to find the middle ground."

Kapit and Silfa said that they believe a form of sensitivity training focused on differing abilities and learning styles—which doesn't currently exist—could effectively prepare faculty to better interact with students with disabilities.

"I've definitely felt like my personal relationships with certain departments have been hindered by physical accessibility," Silfa said. "Our faculty are revered for a reason and I don't want to say that they don't listen, but I think it's really hard to get in touch with them, in a sense."

Baswell, however, is skeptical that a required program, like sensitivity training, would have any tangible positive effect.

"I don't think there are trainings for any profession that will eliminate the incidence of assholes," Baswell said. "What you need is a slow growth of accommodations. If you are a humane person, you will be alert to this and be responsive to it. Trainings? I don't know."

Oh said that, in any case, she believes the University should direct more attention to accommodating students with disabilities, a cause she feels is not always taken seriously.