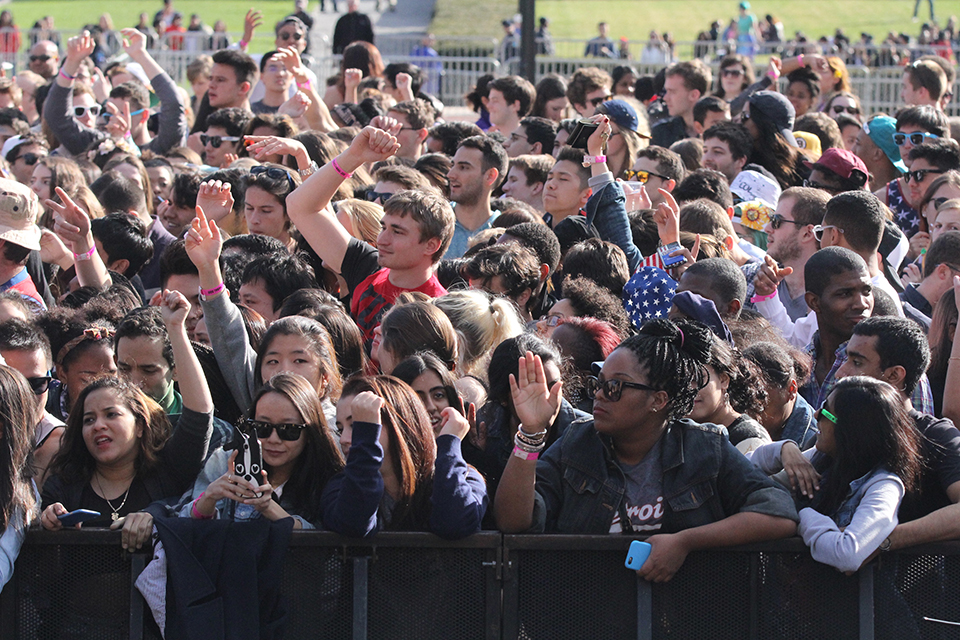 Bacchanal organizers said that students attending Bacchanal this year will likely feel like "caged animals" in the crowd as a result of changes imposed by Public Safety.

When the theme of this year's Bacchanal, "They Don't Want You to Bacch," was released, it was recognized as a tongue-in-cheek reference to the administrative oversight and stipulations that dogged last year's spring concert. As a result of those stipulations, a series of changes to Bacchanal were implemented that students felt significantly damaged the event billed as the most fun day of the year.

But students overseeing the planning of Bacchanal anticipate that students' experience this year may be worse than last year's criticized concert, as the result of being forced to engage in what they described as a rigid and uncommunicative working relationship with Public Safety.

John Murolo, director of special operations and events and Public Safety's point person for Bacchanal, was not made available for interview.

In a series of interviews with Spectator, students working to organize this year's event described feeling stonewalled and dismissed by Public Safety as the office continued to mandate a series of requirements—including a new stage set-up and the use of a wristband system that last year resulted in hour-long wait periods—that they feel will jeopardize the experience and, in some cases, the safety of students who will attend the spring concert. These fears are not unfounded—Public Safety plans to direct crowds of students into six compartmentalized areas separated by barricades.

Though the students proposed a series of alternatives in the attempt to preserve the integrity of the event, Public Safety has been ultimately unwilling to make any compromises or changes based on students' concerns, according to the students.

For Ben Kornick, CC '16, who is currently serving his second year as the president of the Bacchanal committee, this year's experience is simply a continuation of a trend of increased administrative intervention that has diminished the concert experience students are able to enjoy.

"If there's not a precedent that student leaders' voices matter in the conversation, they can continue to make Bacchanal more and more safe in their minds. In our minds, some of the decisions are unsafe," Kornick said. "But ultimately, they'll continue to restrict Bacchanal."

In following Public Safety's requirements, organizers of the event expect that students will experience a markedly different concert than in years past.

For the Bacchanal committee, Columbia College Student Council President Ben Makansi, CC '16, and Engineering Student Council President Caroline Park, SEAS '16, who are also working to plan the event, the most concerning change to the annual spring concert is the expected implementation of a new stage and crowd space design, in which the audience will be directed into six fenced-off areas on Low Plaza.

"It's going to be very constricted and really hot," Park said. "You're going to feel like caged animals."

The design created by Public Safety is intended to reduce safety issues incurred from pushing within the crowd. However, the students involved with planning Bacchanal maintain that the design itself is unsafe.

It is expected that if students need to leave the section to use the restroom, receive medical attention, or get food and water, they will be unable to return to their spot and will be forced to re-enter in a different section.

Students will also be required to pick up their wristbands the day of the concert, a continuation of a change made last year that received heavy criticism from students, who reported waiting in lines for up to four hours. Organizers this year anticipate that students will "easily" wait at least one hour to receive their wristband.

Students interviewed by Spectator largely assailed the changes and said that should such changes be implemented, it would ruin their Bacchanal experience and could potentially create dangerous situations.

Ricardo De Luca Tuma, CC '17 and a resident adviser, said that the design seems to contradict advice students are told to follow on Bacchanal, including staying hydrated and using a buddy system.

"It seems counterintuitive—you might get disbanded from your friends, you won't have anyone to take care of you, you can't get water," De Luca Tuma said. "It's a moment when we should come together and watch out for each other as a community, and that's not what this structure is promoting."

De Luca Tuma added that he anticipates that should these changes be implemented, students will likely be more upset than they were last year.

"I'd like to see what in the past happened to warrant this much change, especially since the changes last year weren't successful in many ways and weren't pleasing to the people," he said.

Austin Park, SEAS '19, said he would still attend Bacchanal despite the changes, but expressed frustration.

"Do we really have to be typical Columbia here?" Park said. "Why can't it just run smoothly for once?"

The Bacchanal committee, Park, and Makansi said that they fought against these changes,

pushing back against the stage design and wristband system, but the alternatives they suggested and concerns they expressed ultimately fell on deaf ears.

"I think that USL has been incredibly receptive—if we want to talk, they're always there to sit down and talk. Really where the gap in communication comes in is when we try to meet with Public Safety," Park said. "Because they're making all these decisions and to not sit down and explain it to us or to give it to us without justification, that's when the issue comes up."

Students involved in the planning of the event also articulated in interviews that they had hoped Undergraduate Student Life would push back against some of Public Safety's recommendations.

Even so, in an interview with Spectator, Dean of Undergraduate Student Life Cristen Kromm and Assistant Director of Student Community Programs and Bacchanal's adviser Aaron Gomes, repeatedly said that they must and will continue to defer to Public Safety's recommendations when it comes to matters of safety.

"I think the students put together some ideas that made sense to me, but I don't have the background or experience in concert planning," Gomes said. "I don't have the experience to say that the one that is proposed now is not a good idea."

"The role of Public Safety here is to tell us what is safe," Kromm said. "And so if that design is what Public Safety puts forward, that is what we need to move forward with."

"[Aaron] is a good advocate for us, but sometimes it seems like he can't advocate for us as strongly as we would like because of the position he is in and having to maintain his relationship with campus partners for other clubs he manages," Van Marter said. "So when it came to later in the year and we looked to interface with these campus partners more directly, I think it becomes a big session of, a combination of being stonewalled and led on."

When asked if they felt their ability to advocate for the students planning Bacchanal has been constrained by their need to maintain working relationships with Public Safety, Kromm and Gomes declined to comment.

Though three independent sources privy to Bacchanal planning meetings confirmed that Murolo told students he would always be willing to meet with them, students said they have been unable to set up a meeting with him outside of the two planned event review meetings, which Gomes and Kromm confirmed. They also complained that, although they had been working to set up an event review since early fall, they were unable to have such a meeting until February.

Gomes and Kromm declined to comment on why they thought students had been unable to meet with Murolo despite his reassurances of availability.

But at event reviews—the only time they've been able to communicate face to face with Murolo—students said that he has yet to make any compromises or changes to the concert in response to their concerns, and though nothing is final yet, has made no indication that they should expect any such changes in the future.

In interviews with Spectator, the Bacchanal committee, Makansi, and Park outlined the alternate proposals they presented to Kromm, Gomes, and Public Safety. Had Public Safety been willing to compromise, the students said, this year's concert could have looked very different.

In an emailed proposal to Gomes, Kromm, Facilities, Risk Management, and Public Safety obtained by Spectator, the Bacchanal committee, together with Makansi and Park, offered alternatives to the cross-hatch design they believed would be safe.

Although students said Public Safety said their proposals were read and that the office is continuing to work on the proposed stage design, they don't anticipate that the design will change. 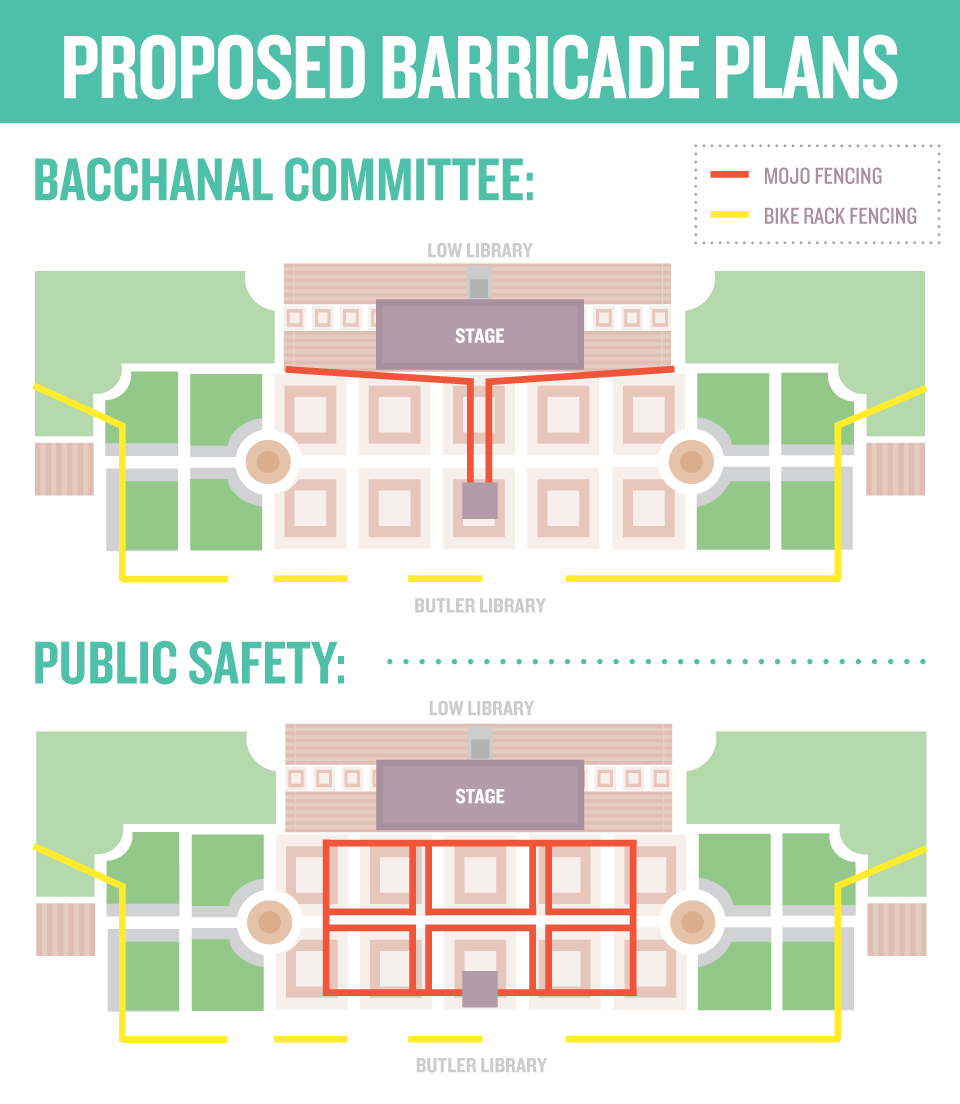 In lieu of distributing wristbands, the committee, Makansi, and Park proposed implementing a system that would allow students to swipe in and out of the concert space. When a certain number of students would leave the event, a new group of students could enter the venue.

For Public Safety—and Kromm and Gomes—giving more than 4,000 students the expectation that they will be able to gain entry to the concert is unsafe.

"For the people who are standing at that front gate, if there are people who are saying, I see three people leave,' but there are 55 people waiting to get in—managing that crowd from the experience that all of us have had, that feels not safe," Kromm said.

Once it was decided that the swipe access system would not be implemented, students then advocated to allow attendees to pick up their wristbands the day before the concert. That idea was also rejected, with Murolo citing the concern that students could replicate and fake wristbands.

Students involved with the planning of the event largely said in interviews they found the experience to be disillusioning. But for Kornick, it has also established a dangerous precedent and prompted concerns about what future Bacchanals will look like.

"All of those changes we saw last year were implemented and students weren't very happy about it, but at event review, we heard, Best Bacchanal ever, we finally have a method that works,'" Kornick said. "Then we saw these changes this year. Now we're going to have this Bacchanal, and it's going to be the safest one yet, it will be the model—until next year. What happens next year?"

For Park, the experience only underlines what she described as a common truism among Columbia students.

"I think it says something that when everyone reflects back on their Columbia experience, everyone says that their freshman year experience was the best year for Bacchanal," Park said. "I think this sets a really negative precedent for what should be the best day of the year—it turns it into a really negative experience."