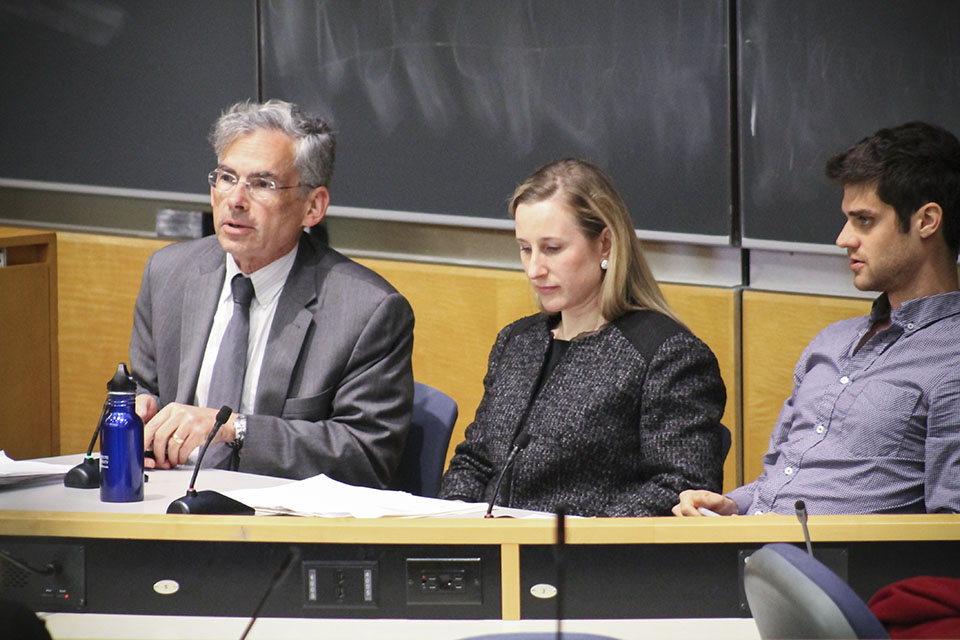 The Earth Institute and the Office of Environmental Stewardship are working together to facilitate the first ever long-term sustainability plan for the University, which will outline concrete action items aimed at reducing Columbia's impact on the environment over a three-year timespan.

The official plan will be announced and presented to University President Lee Bollinger for consideration as official University policy in spring 2017—which coincides with the University's pledge to reduce greenhouse gas emissions by 30 percent from 2007 to 2017 under Mayor Michael Bloomberg's PlaNYC initiative.

The proposed draft of the principles, which was released two weeks ago, lists three main targets: advancing Columbia's core educational, research, and outreach missions to demonstrate its leadership around the world; planning, developing, implementing and measuring strategic sustainability initiatives; and fostering a culture of sustainability both on and off campus. The principles are designed to apply to all the University's campuses, including its eight global centers.

The principles themselves do not represent any specific measures for the University to take, but instead serve as a formula and "lasting vision" for the development of the long-term sustainability plan, Prata said in an interview with Spectator.

Additionally, though 30 faculty members of the Earth Institute signed a statement in support of divestment from some fossil fuel companies, Earth Institute Faculty Chair and Director of the Sabin Center for Climate Change Law Michael Gerrard, CC '72, said that neither the principles nor the final sustainability plan will make recommendations on divestment.

"It would, frankly, put the sustainability office in a very awkward position if it were asked to opine on divestment," Gerrard said. "That's not really their function. There are similar motivations, but it's a separate function."

To develop the long-term sustainability plan, the Office of Environmental Stewardship created three focus teams in December to study issues related to transportation, waste, and greenhouse gases. The first step for these teams is to assess "the state of the state," and then to develop potential solutions for inclusion in the long-term plan which align with the sustainability principles, according to Prata.

The focus teams will present their findings to the Senior Sustainability Advisory Committee—a group created in fall 2015, led by Gerrard and Executive Vice President for University Facilities and Operations David Greenberg, which includes Vice President of Operations Frank Martino, Vice President for Campus Services Scott Wright, and Professor of Earth and Environmental Sciences Peter deMenocal. This committee will then finalize the long-term sustainability plan.

But in the meantime, the Earth Institute and the Office of Environmental Stewardship are focusing on finalizing the principles. The two departments also hosted a town hall on Tuesday night to elicit public feedback on the draft version of the principles, during which panelists expressed that transparency was a key part of the process.

"That's something that has already been identified in our focus group, that better communication and more transparency is necessary, as a high-level goal, and we'll be coming up with strategies to achieve that goal," said Alex Beecher, GSAS '16, who serves on the greenhouse gas focus team. "It's definitely something we're taking into account, and I think it's also something that we're still solving."

But the University has not been entirely transparent with regard to some of its existing sustainability initiatives. Despite the University's pledge to cut 30 percent of greenhouse emissions by 2017, it has yet to publicly release concrete data, such as interim carbon emissions numbers, that would indicate its progress.

Prata, Gerrard, and Beecher will moderate two additional town halls at the Columbia University Medical Center and the Lamont-Doherty Earth Observatory over the coming weeks to elicit further feedback on the Principles, and are hopeful that the collaboration between the Institute and Environmental Stewardship will balance the University's large research capabilities with its duty to preserve the environment.

"If we're out telling the world that they should be more sustainable, we should start at home," Gerrard said.