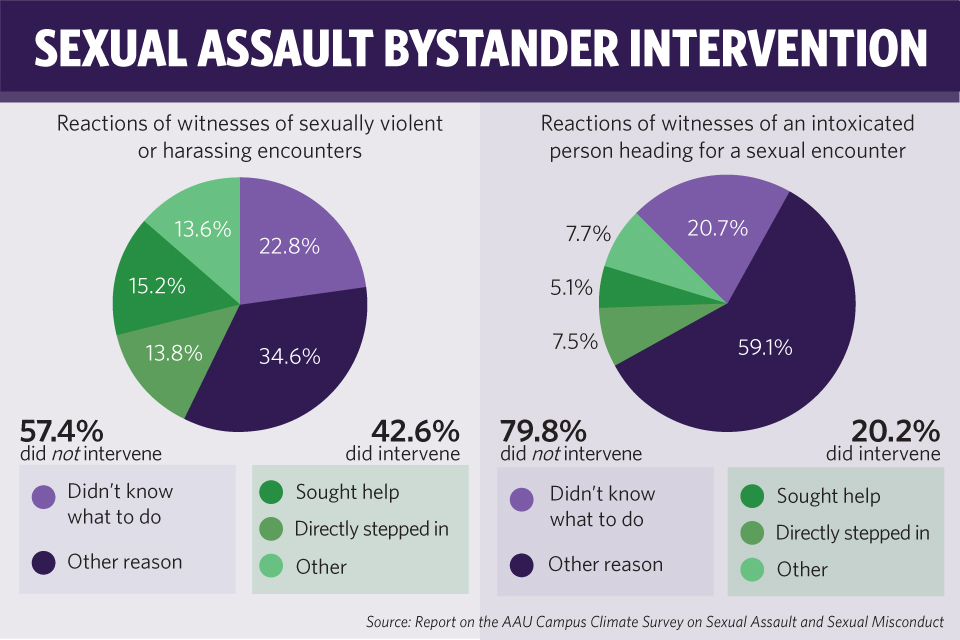 When Columbia introduced mandated bystander intervention training in 2014, it led peer institutions in sexual assault education. But while Columbia continues to be a leader, experts agree that the education available to students fails to meet the model agreed to be most effective—required, continuous training.

Bystander intervention training is key in improving intervention rates according to the survey conducted by the Association of American Universities in 2015 that showed that well over half of Columbia students have witnessed but failed to intervene in potential cases of sexual assault. The survey found that 57.4 percent of Columbia students did not intervene when witnessing another student behaving in a sexually violent or harassing manner and 78.9 percent did not when witnessing another student heading for a drunken sexual encounter. In both cases, roughly 20 percent cited that they did not intervene because they didn't know how.

Bystander intervention training was implemented at Columbia in the fall of 2014, beginning with Step Up!, a workshop led by Sexual Violence Response during NSOP. The survey was carried out one year after the implementation of these programs. Revised this year to Step Up! And Get SAVI, the workshop features 150-student breakout sessions to discuss intervention possibilities in various scenarios involving sexual and intimate partner violence.

"It's one of the things that really has the potential to combat rape culture," Coalition Against Sexual Violence member Abby Porter, CC '17 said. "Because when you're sitting through these sessions, you challenge preconceived notions of what it means to be at a party, what it means for a friend to look like they're in need."

Among Columbia's peer institutions, only Harvard and Brown also have mandatory bystander intervention training for first-years, and Dartmouth has workshops for specific student groups as well as the option to request workshop training. A report released at Harvard in March recommended that the university mandate bystander intervention training all four years of college.

A similar report is expected to be issued at Columbia by the Task Force on Gender-Based Misconduct at the end of the semester, providing recommendations on whether to implement further mandatory bystander intervention training, according to Executive Vice President for University Life Suzanne Goldberg.

"What research there is shows that an effective program needs to be continuous," No Red Tape Prevention Coordinator Michela Weihl, BC '17, said in September. "If the school were prioritizing efforts to lessen violence, it would make a program that all students would have to complete throughout their four years here."

With only one SRI workshop dedicated explicitly to bystander intervention—a workshop called Step Up II—there currently exists no way to ensure that students receive more than one instance of exposure to the training.

And, if a student does choose the bystander intervention option for the SRI, interaction with this material would be limited to the first two years of college—only new students are required to complete the initiative.

Experts, SVR staff, students, and administrators all agree that these are insufficient circumstances for students to learn and practice bystander intervention.

"A one-time event or training is not going to make a deep change. People need dosages of trainings and education," SVR Interim Director Suraiya Baluch said.

When asked about the the current model—where NSOP training might be a student's only interaction with bystander intervention training—Goldberg said this is "not enough."

"Stand-alone training during NSOP is useful, but not enough to impart skills or shape climate, and that's part of the reason we have the SRI," Goldberg said.

According to SVR assistant director Kirsten deFur, SVR recognizes that the one-time NSOP workshop and the nonmandatory SRI workshop is not as effective as continued education.

"Best practice we know with any kind of prevention programming is that it takes multiple exposures," she said. "You have to learn it more than once to really have that influence—behavior change, attitude change, all the components that are going to help us feel empowered to intervene."

In order to equip students with the knowledge of how to intervene, deFur outlined the baseline takeaway she hopes students receive from Step Up! And Get SAVI: Notice what's happening, understand it to be a problem, assume personal responsibility, know how to help, and intervene. 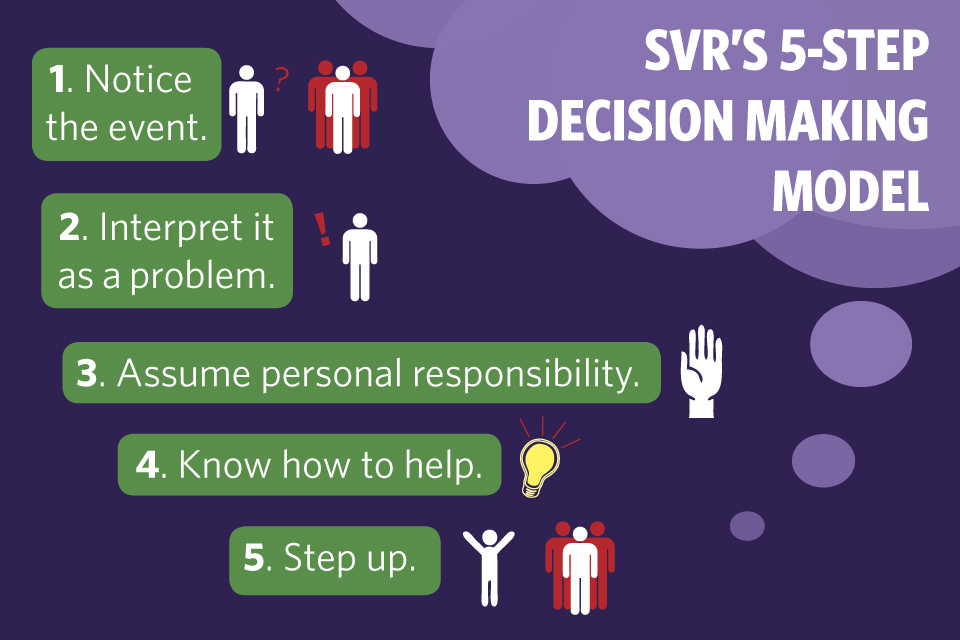 "In order to feel empowered, you need to have the knowledge, know what your options are, be able to understand the context and that there are a bunch of different factors that are involved," deFur said. "You've got power dynamics, relationship dynamics, and community dynamics."

Professor of Sociology and Organizational Studies at the University of Michigan Elizabeth Armstrong, co-author of an oft-cited study on the epidemic of campus sexual assault, said that expecting bystander intervention asks people to overcome the many barriers that exist.

"What the numbers suggest now is that educators so far have vastly underestimated the difficulty, the power of peer culture and the difficulty of training people or persuading people to operate against it," Armstrong said. "The more a group dynamic gets going the less people are able to operate in any way in opposition to the group we're creatures of the crowd mostly."

DeFur said that the barriers to intervention include an individual's own tendencies, the relationship that person has with the other people involved, and circumstantial factors like being in an unfamiliar place.

Still, both Armstrong and Goldberg said that the ideal is a campus culture wherein bystander intervention is the norm, and training is a way to get there.

But, given student resistance to the SRI and the difficulty of ensuring students completed it in its first iteration, many raised the concern that students would respond to the mandatory programming required to implement a continuous bystander intervention education with resistance.

But students interviewed by Spectator said they would undergo such training if it were mandatory.

"I would be indifferent. Indifferent to positive," Ellen Guo, CC '18, said when asked if how she would receive a mandate to attend bystander intervention training. "I think it's important to have it. A lot of people are like, 'It's such a drag to go.' But it's like two hours max, so I would think it would be fine."

Edwine Coulanges, CC '18, who opted for the Step Up II SRI option, said she found it more effective than the NSOP training.

"We're not taking advantage of it, definitely," Coulanges said of the existing training options.

She also said she would be willing to attend additional mandatory programming, like Step Up and Step Up II, and that both were helpful to have every year.

For Porter, it is essential that all students undergo additional bystander intervention training like the Step Up II workshop.

"I know a lot of people who have gone into these workshops not wanting to do them and who have come out saying, I actually really learned something,'" Porter said. "It's important for everyone to have to do them. I think it's too important of an issue to say maybe they might not want to this, we won't impose this on them. It should be imposed."

Goldberg also said that any costs of making programming mandatory are outweighed by the benefits of providing students with effective sexual respect education.

"Even though introducing the SRI was a mammoth undertaking, it was unquestionably worth the effort," she added. "The resources dedicated to creating Sexual Respect Initiative 2.0 this year have paid off in terms of stronger programming and easier access, and we expect to continue an arch of improvement for next year."

DeFur said that increasing the conversation around bystander intervention of all kinds—for example, alcohol abuse or a heated disagreement—will blanket the campus with messages that have the potential to reinforce a new campus culture.

"Community norms are a part of bystander intervention, and that's how we're going to influence change," deFur said.

For Porter, Columbia has the potential to become a leader in sexual assault prevention through increased bystander intervention education.

"I hope, that it becomes something that when people apply to Columbia they know this is going to be a part of their education," Porter said. "How great would that be if we were known as the school that was really taking this seriously?"