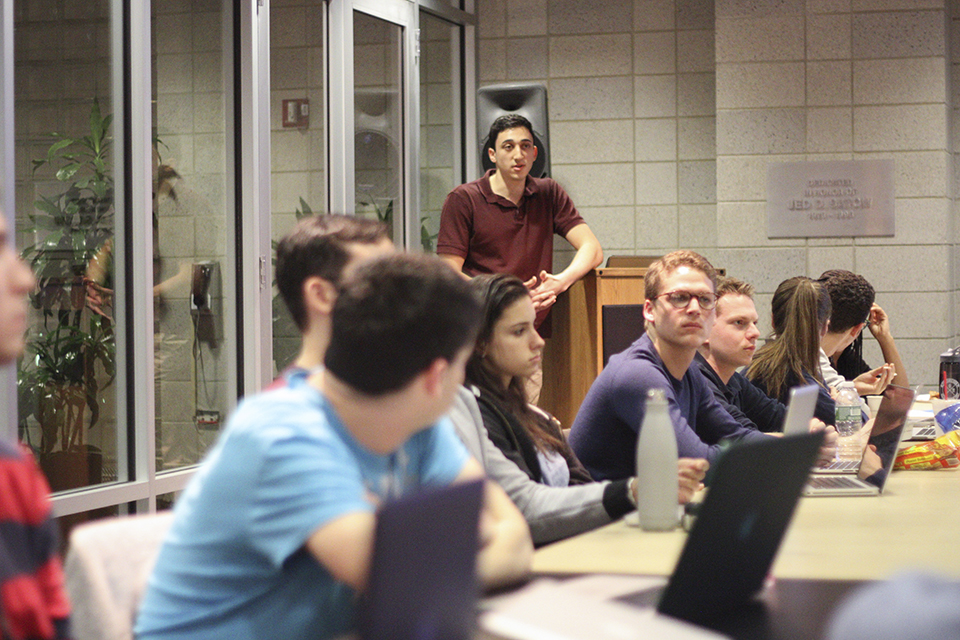 Presidents from all three undergraduate student councils have expressed concern that the Columbia Elections Board has inadequately promoted council elections registration this year, resulting in a number of candidates running uncontested, positions left unfilled, and potentially a number of students being shut out from running for council positions.

"I think a lot of good can come from giving outsiders the opportunity to get involved in student council," Makansi said. "They don't have any residue from drama during previous years, they're not burnt out from inside politics and stuff, they have fresh ideas and fresh energy."

"Viv [CCSC Vice President for Policy Vivek Ramakrishnan, CC '16] and I ran an entire campaign last year criticizing how exclusive CCSC is," Makansi added. "We are very passionate about making sure that outsiders not necessarily win the elections, but have a chance to run and aren't shut out by artificial means, whether that's the kind of exclusive culture or lack of advertising of elections registration."

Makansi, Park, and Heyman said the first time they were contacted by CEB with information about the elections was on Feb. 29—two days before the information session for CCSC and ESC elections was scheduled to occur. Heyman also said that she was not informed of the GSSC information session, which had been pushed back to March 22 due to scheduling conflicts, until the day before it occurred.

Spectator confirmed that it also wasn't until March 22, the day candidate registration was due for CCSC and ESC elections, that Makansi was provided the registration link by CEB to disseminate to the Columbia College student body. Park said she was not contacted by CEB with the registration link, and the only reason she was made aware of the link was through a current ESC council member, who had actively searched for it because they are currently running for a position.

But CEB Chair Kate Welty, SEAS '18, said in an interview with Spectator that the board felt it had adequately publicized information about elections registration on their social media pages, as well as the class Facebook pages.

Last year, CEB used the University Senate listserv—which goes out to the entire undergraduate student population—to remind students to vote for candidates and announce the winners.

Welty said that CEB did not use the listserv this year to contact students about registration, given that it is a "pretty big move."

Makansi said that the lack of an institutionalized process for advertising elections registration has been a systemic problem.

Still, Makansi, Heyman, and Park said that the elections board should have been more proactive with its communication to ensure that elections information was adequately promoted on social media and through emails.

"If the elections board is going to be an autonomous body, then fine, know the constitutions inside out, know the responsibilities and the timeline more than a week before spring break, disseminate to the councils as they see fit," Heyman, who had to reach out directly to CEB for information, said.

"We're not supposed to be doing the nagging and making the decisions," Makansi said. "They're supposed to be being proactive about communication and making decisions that ensure that all students have a fair shot at running for a position."

"Even people on council [ESC] didn't know a lot about it, and these are people who have ran before and are planning on running, so that just goes to show that people who haven't even had a chance to be exposed to it, who might potentially be interested, have no idea that they're going on," Park said.

Students interviewed on Monday largely remained unaware that elections were happening and said they did not know that registration had passed.

"I know absolutely nothing about the elections," Sami Frankel, CC '19, said. "If I had wanted to run, I'd be screwed."

"There could have been more effort, considering I haven't heard about this," Grace Carroll, CC '19, said.

And for students who were interested in running, such as Walker Magrath, SEAS '19, information about the election registration deadline was unclear.

"I didn't even realize it was happening, actually. I didn't hear about it at all," Magrath said. "It seems almost like a perpetuated dynasty, as stupid as that sounds."

Though campaigning officially begins this Wednesday, Heyman said she was particularly concerned that GSSC's elections policy, which requires that all candidates run opposed, could be problematic. Of the 12 positions open on GSSC, four candidates are uncontested and four positions have no candidates at all, as of print.

"I'm obviously not comfortable leaving council in shambles because we don't have an election to house," Heyman said. "I think this is true of all council people, that we care, which is why we're doing the work that we're doing.

"I would hate for elections to turn into something where it becomes self-selecting," Park said.