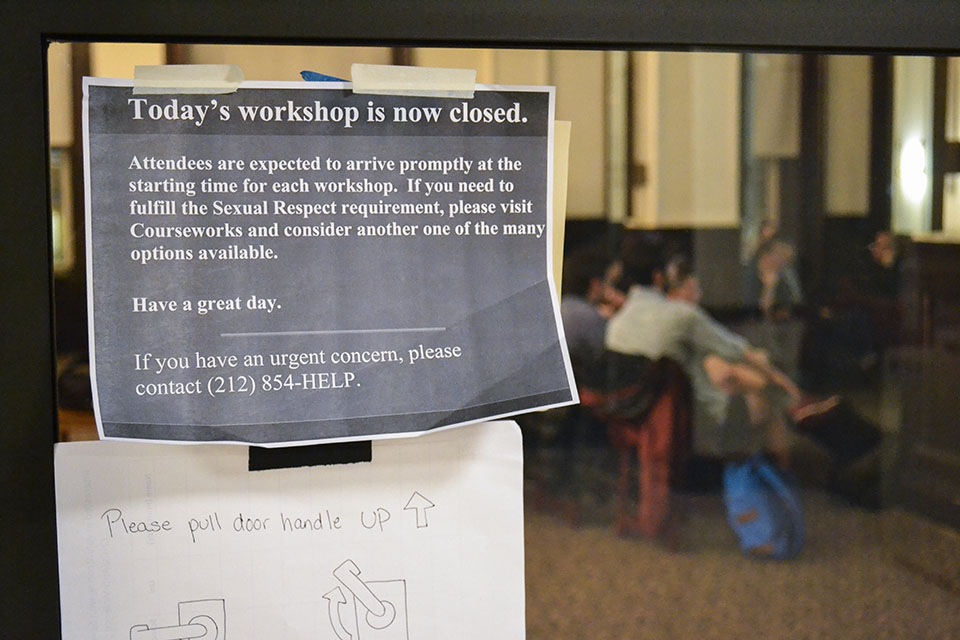 95.4 percent of new students in Columbia College and the School of Engineering and Applied Science have completed the sexual respect requirement.

Students who did not fulfill the requirement were initially told that they would lose their "good community standing," making them ineligible to become resident advisors or hold any leadership positions in new student orientation and pre-orientation programs.

However, after initial low student response to the SRI, registration holds, which had been used as a punishment for SRI incompletion last year, were reintroduced as a consequence for not fulfilling the requirement after spring break, leaving students only one week to meet the extended deadline.

According to data sent to Spectator by a Columbia College spokesperson, only 55.7 percent of new students enrolled in CC or SEAS had completed the SRI by March 21, one day after the original deadline.

In a previous interview with Spectator, Dean of Undergraduate Student Life Cristen Kromm said that because a significant number of students had failed to complete the SRI prior to the deadline, her office was compelled to add registration holds as a punishment for not fulfilling the requirement.

"We were trying something new, and we had hoped that would be enough of an incentive, and, unfortunately, we learned that it wasn't," Kromm said regarding the original punishment.

Executive Vice President for University Life Suzanne Goldberg noted in an interview last week that making the SRI a requirement for all students was crucial to its success.

"I talked with many students, all of whom said that if it was not required, students would not participate," Goldberg said. "As with any programming, there are costs and benefits of making something a requirement. I think, on these issues, the answer is the benefits outweigh the costs."

Eric Li, CC '19, said that while he had wanted to fulfill the SRI requirement prior to the change in punishment, the threat of registration holds had been the deciding factor in his choice to complete the SRI.

"The registration hold definitely was the final incentive that brought me to finish the whole thing," Li said.

For students like Yasmin Butt, CC '19, registration holds seemed justified due to a need for sexual respect education on the Columbia campus.

"I feel like it's fair," Butt said. "I've personally heard a lot of backlash because of that, because [the punishment not completing the SRI] is so much more like a serious offense now, but I feel like it's applicable regarding how present this issue is on campus."

Other students, like Anna Bryan, CC '19, see registration holds as an overly severe consequence of not fulfilling the requirement, but did believe that using a harsher punishment to encourage completion of the SRI is reasonable.

"I understand that if you can't be a resident advisor or an OL, a lot of people don't want to be those things anyway, so it wouldn't be a punishment for them," Bryan said. "I think maybe the registration hold is a little bit strict of a punishment, but if people are going to [complete the SRI as a result], I understand."