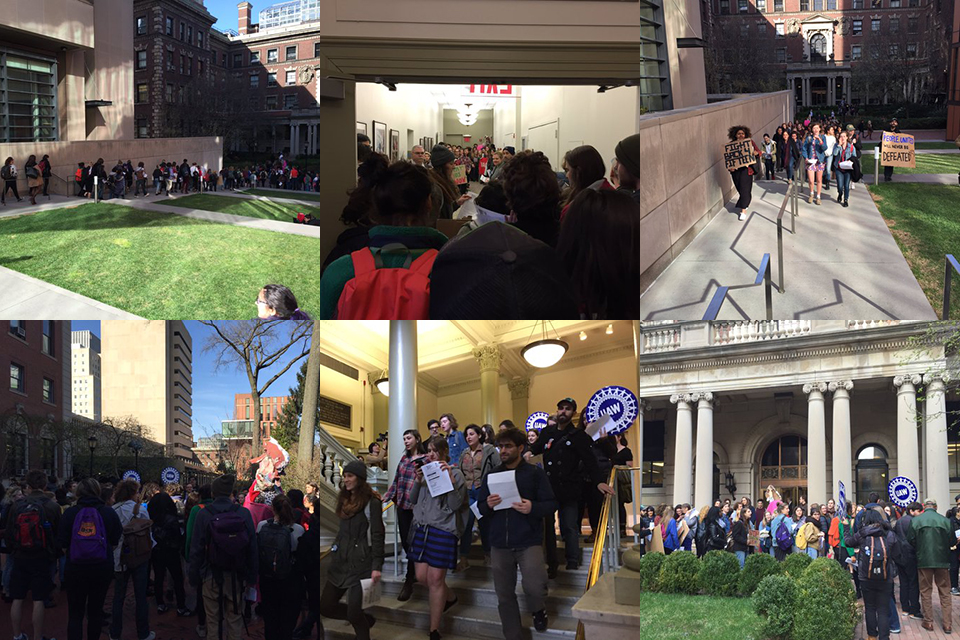 Over 75 members of Student-Worker Solidarity called on Barnard to pay its student workers $15 an hour.

Over 75 members of Student-Worker Solidarity held a rally on Wednesday calling on Barnard to pay its student workers $15 an hour, following announcements on wage increases at Columbia and New York University.

Following SWS's year-long campaign, Columbia Provost John Coatsworth announced on Monday that the University would be increasing pay for all student work to $15 an hour over the next three years. NYU made a similar commitment for its student workers last week, while both Mayor Bill De Blasio and Governor Andrew Cuomo have also committed to paying public employees a $15 an hour wage.

"This is not an issue to address simply when it's convenient. This is a top priority," SWS organizer Maya Garfinkel, BC '19, said at the rally. "Barnard's actions should not merely come in compliance with state law but should affirm the value of its workers and pave the way for other institutions to follow."

"The cost of living in New York continues to increase at a rapid rate, and $15 an hour barely keeps up," Garfinkel led the crowd in chanting at the rally. "Don't just follow, lead. Be a leader now."

Outside President Debora Spar's office in Milbank Hall, SWS members called on Spar and Provost Linda Bell to release a statement in favor of raising hourly student-worker pay after failing to receive updates since the group's meeting with administrators last week.

"Barnard students have heard nothing from the administration," Gabija Jadvyga, BC '18, said during the rally. Without any sort of action, "the Barnard students [would be] making less than the Columbia students, which is very ironic for a women's institution."

In a statement sent to Spectator on Monday, Barnard's chief operating officer, Rob Goldberg, said that the college intends to make an announcement with respect to minimum wage by the end of the semester.

"Barnard has been actively discussing and developing a plan that increases our hourly minimum wage for all part-time student workers," Goldberg said.

While Coatsworth's announcement specified that Columbia would be increasing pay over the next three years, SWS called on Barnard to raise hourly student worker wages to $15 within the next year.

"Workers: We make this school go 'round, pay us, or we will shut it down," the SWS protesters chanted.

During the rally, SWS organizers also called for an alleged payroll backlog and fair compensation for all unpaid volunteer positions.

"Emotional labor is devalued under gender injustice," Garfinkel said. "It is unacceptable that a women's college is paying their workers less."