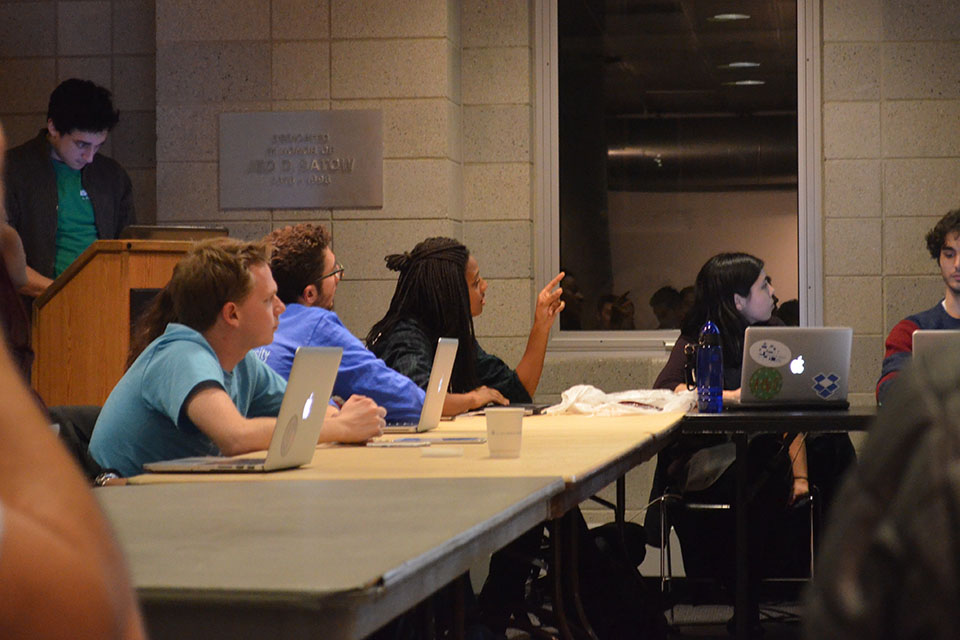 CCSC passed resolutions about the Henry Moore sculpture and a proposal set forth by the Coalition Against Sexual Violence at its general body meeting on Sunday.

Columbia College Student Council passed a resolution urging administrators to reconsider the installation of Reclining Figure, a Henry Moore sculpture set to be installed in front of Butler Library, at its general body meeting on Sunday.

Though preparations for the sculpture's installation had begun in late March, University Senator Marc Heinrich, CC '16 and co-chair of the Student Affairs Committee, announced at the meeting that the installation has been postponed until after commencement.

CCSC had recently sent out a survey to gauge student feedback on the sculpture, in which 90.3 percent of respondents called for the sculpture to either be placed in another location or removed from the campus entirely.

Class of 2018 Vice President Lani Allen suggested adding a provision to the resolution that would advocate for student involvement in future decisions about the fate of Reclining Figure, which in the current system would likely be made by the board of trustees' Physical Assets Committee.

"It's important to say that student input be taken into account in the final decision, whether it's placed, and also if they decide to move it, where it should be placed," Allen said.

However, Class of 2019 Representative and newly elected Vice President Adam Resheff suggested that CCSC focus on the resolution at hand and work on a more substantial proposal surrounding student involvement at a later time. The resolution was ultimately passed without a student-involvement clause.

"Going forward, it's something students should be involved in, in terms of how our campus is shaped and how student space is used," Resheff said. "I think we should discuss it at some point, but for now we should have this resolution."

As part of CCSC's yearly constitutional review process, CCSC President Ben Makansi, CC '16, will lead a team of council members to evaluate the relationship between CCSC and the Columbia Elections Board, whose handling of this year's student government elections has been criticized by both council members and candidates, with one candidate calling for a revote.

Vice President of Finance Sameer Mishra, CC '16, plans to introduce a revision that would eliminate the position of Sandwich Ambassador and either combine or entirely remove the  pre-professional and alumni affairs representative positions.

The revisions will be put into writing and voted upon in next week's general body meeting.

CASV member and newly elected CCSC Vice President of Policy Abby Porter, CC '17, had presented the group's proposal to the council in February.

At Sunday's meeting, Porter suggested that because the University lacks a centralized TA hiring process, academic departments themselves could engage the Office of Student Conduct and Community Standards as a neutral third party to protect the privacy of TA applicants' disciplinary records.

During Sunday's meeting, CCSC worked to plan its silent disco event scheduled for Friday. But only a handful of members, mostly from the executive board, expressed interest in actually helping set up and manage the event.

Makansi expressed frustration that the majority of the general body was not helping execute the council's events following the recent elections.

"It's really disappointing that E-board is taking a disproportionate role in these campus life events," Makansi said. "There are 35 people in the room, and nobody has an hour on a Friday night? I guess elections are done, so there's nothing at stake here."

The University will also be sending out information on Monday to students to allow them to sign up for digital subscriptions to the New York Times, according to Makansi.