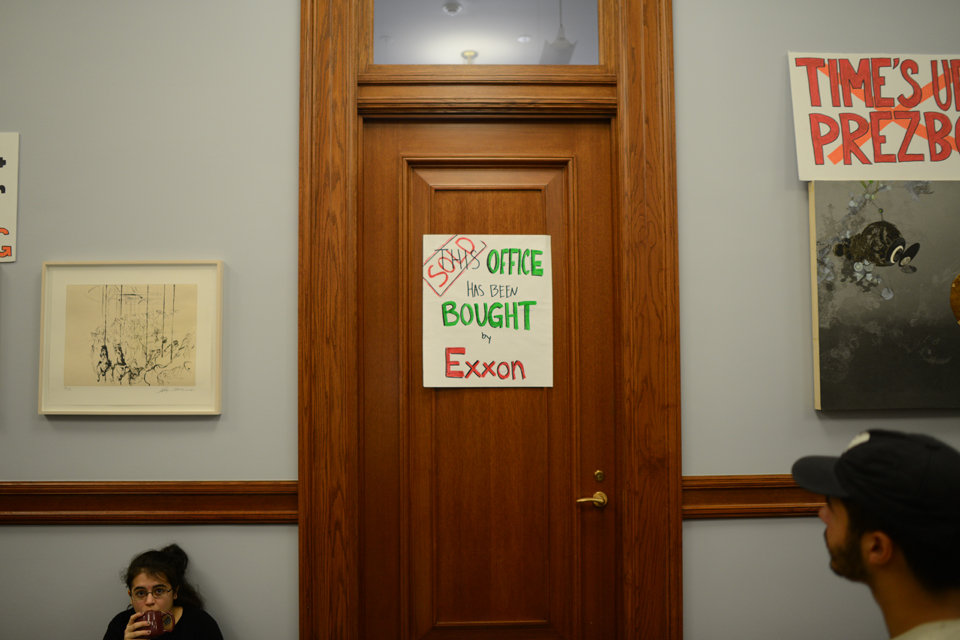 CDCJ protesters have moved into President Bollinger's office, after finding the door unlocked.

While Low was open briefly on Friday morning after being closed all night, members of the public are not being allowed inside, and Public Safety since has told Spectator that anyone who exits the building will not be allowed back inside. Offices inside Low, including the President and Provost's Office and the Visitors' Center, are all closed for the day.

CDCJ organizers said they plan to stay inside until Bollinger offers a public statement in support of divesting from the top 200 publicly traded fossil fuel companies.

"After engaging with administrators directly and them refusing to act in the face of campus support, this [the sit-in] is our next option," CDCJ organizer Daniela Lapidous, CC '16, said. "This shows that we have picked the right target. If our demand was just to meet with President Bollinger, they would have offered it."

In a meeting yesterday with the group, adviser Pete Cerneka said that Bollinger was willing to meet with them on Monday at 4:30 p.m.

Lapidous added that in previous meetings with CDCJ, Bollinger has implied support for divestment—as he has told them that divestment won't hurt the endowment and recommends divestment when companies are engaged in immoral behavior.

"If he's resisting so hard to making this announcement, that means that he has the power to make divestment happen," Lapidous said. "This situation shows me that we have touched a nerve."

Though the protesters had occupied the hallway outside Bollinger's office since Thursday afternoon, they found an open door to the office—which yesterday had been locked—around 9 a.m. on Friday.

Shortly after moving into the office, two administrators, serving as delegates, informed the protesters that their occupation could violate another rule under the University Rules of Conduct. The rules classify "holding or occupying" a private office for an individual's own purpose as a serious violation.

On Thursday, protesters were informed that they have broken the rules when they continued to sit in the hallway outside of Bollinger's office after Low Library has closed. Entering or remaining in a University facility "without authorization at a time after the facility has been declared closed by the University" is also considered a serious violation of the rules.

"We feel compelled to do whatever we can even if we are risking actions because we feel the weight of our moral responsibility on this issue," Lapidous said. "If someone asks me in twenty years, 'where were you when we were trying to stop climate change?' I want to say I was doing all I could."