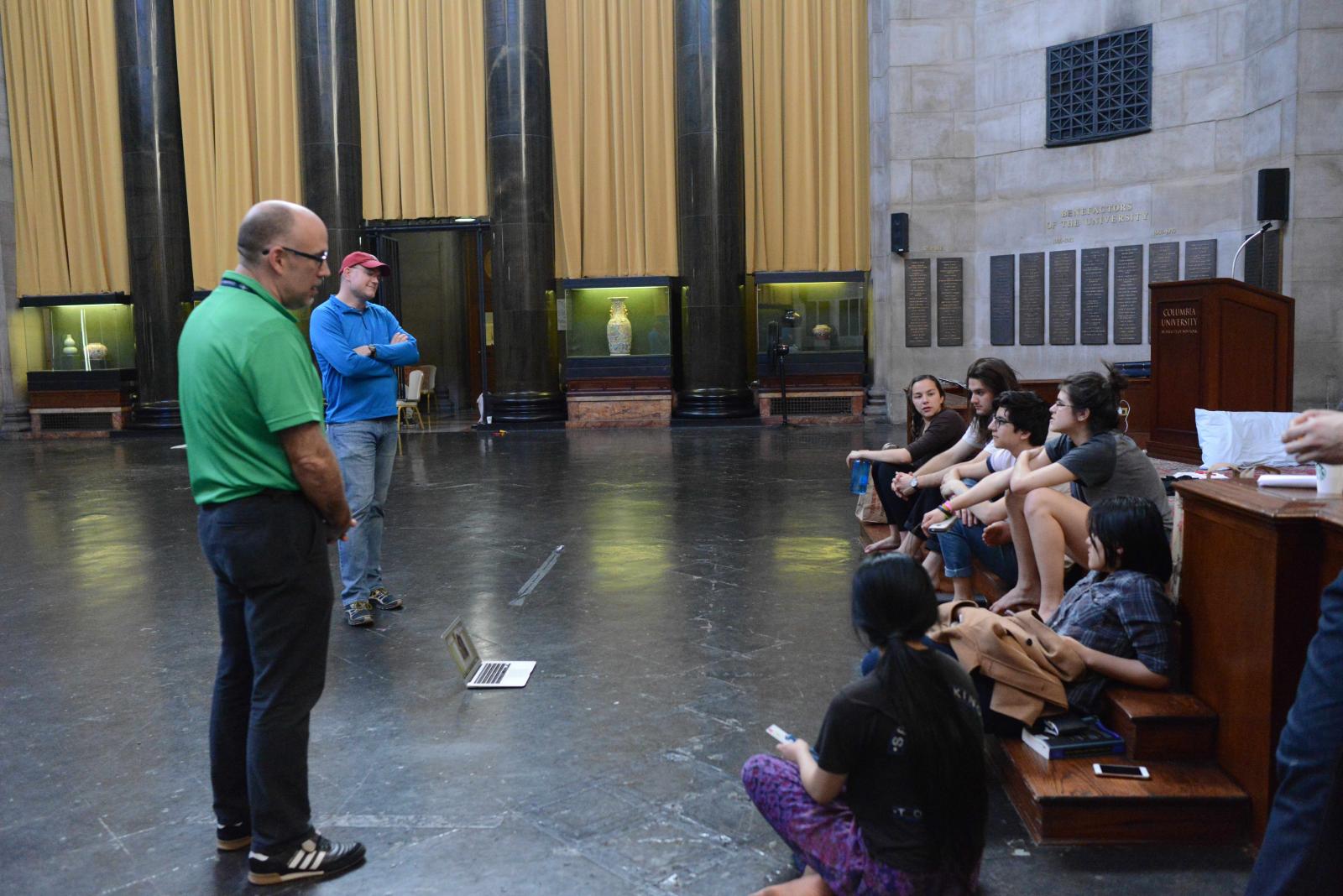 Members of CDCJ have been staging a sit-in inside Low Library since Thursday.

Rules Administrator Suzanne Goldberg has said she anticipates that suspension will be the most relevant sanction for the University Judicial Board to consider if the seven students occupying Low Library are found responsible for violating the Rules of University Conduct, according to emails sent to Columbia Divest for Climate Justice members.

The email comes after a meeting with protesters inside Low Library on Friday evening, during which Goldberg said that she could not tell the protesters what sanctions the University Judicial Board would recommend for violations of the rules—only the UJB has jurisdiction over sanctioning once the rules administrator has filed charges.

In an email on Sunday, Goldberg said that she expects to recommend that the occupiers be found responsible for numerous serious violations, adding that several of the sanctions the UJB may impose would be "too mild" in light of the extent of the "extensive warnings" the protesters have received.

"The sanction of suspension is what I anticipate assessing to be most relevant for the University Judicial Board to consider should it find you responsible for the serious violations at issue," the email said.

CDCJ members sitting in at Low said that they had expected that suspension would be a potential sanction ever since the first warning Goldberg sent them on Friday.

"The only words she explicitly said as far as examples of outcomes for us were suspension and expulsion," Cristian Padilla, CC '17, said. "She never even referred to the lighter punishments."

The occupiers expressed concern that Goldberg's email suggested she would play a role in recommending sanctions for students found in violation of the rules.

"Her role in how she's outlined it to us so many times is not concerned with our actual sanctioning. Her job as the rules administrator, as she's made abundantly clear, is to do an investigation," Lucas Zeppetello, SEAS '16, said. "I don't know anything about her making recommendations about what our sanctioning should be—that's not something she's elaborated on before."

In her email, Goldberg noted that she expects to "recommend that the appropriate sanctions in this circumstance be correspondingly serious."

Ultimately, the protesters have indicated that they will continue their demonstration despite Goldberg's latest email.

"I wasn't that stressed out about it," Colin Muller, GS '17, said of the email. "We knew coming into it that [suspension] was a possibility."

Muller added that Columbia College Student Council's statement condemning suspension or expulsion as a potential punishment for the activists has also helped to assuage any fears.

CCSC released a statement on Sunday evening condemning suspension or expulsion as a potential punishment for CDCJ's activists. CDCJ organizer Daniela Lapidous, CC '16, attended CCSC's general body meeting on Sunday to ask the council to issue a statement of support similar to the statements issued by over a dozen student groups on campus.

The statement acknowledges that punishment may be necessary, but suggests that suspensions and expulsions would be excessive.

"The University's Rules of Conduct allow for a range of potential sanctions—including expulsion—due to any infraction deemed 'serious,' including occupation of a University building after closing hours," the statement said. "While we fully expect sanctions to be applied to a certain extent, we, the Columbia College Student Council, are concerned with the possibility of suspension or expulsion facing the students of Columbia Divest for Climate Justice who continue to non-violently occupy Low Library."

The statement also clarified that CCSC was not officially supporting fossil fuel divestment, though 73.7 percent of respondents voted in favor of divestment in CCSC's first-ever ballot initiative in 2013. The resolution, which 36 percent of Columbia College students voted on, was placed on the ballot by members of Barnard Columbia Divest, the predecessor to CDCJ.

While Goldberg's statement has not shifted the protesters' strategy or goals, occupiers expressed disappointment in the email.

"It seems like she's taking a really aggressive stance," Muller said. "It's a bummer that it's from her that we're getting most of the communication, rather than from President Bollinger. … She also seems to be piling up as much punishment as she can against us to punish us for something that we care about and that other students care about."

Goldberg clarified in the email sent on Sunday that President Bollinger will not meet with an organization whose members are in active violation of University rules. Previous information the occupiers had received stated only that Bollinger would not meet with students who themselves were in violation of the rules.

When asked if this changes their expectations of whether Bollinger will meet CDCJ members outside Low on Monday, Padilla said that the group's expectations have always been tempered.

"Hopefully we'll meet him," Padilla said. "If not, well, he'll have to see us eventually."