100 camp out on Low in solidarity with CDCJ occupation

100 camp out on Low in solidarity with CDCJ occupation 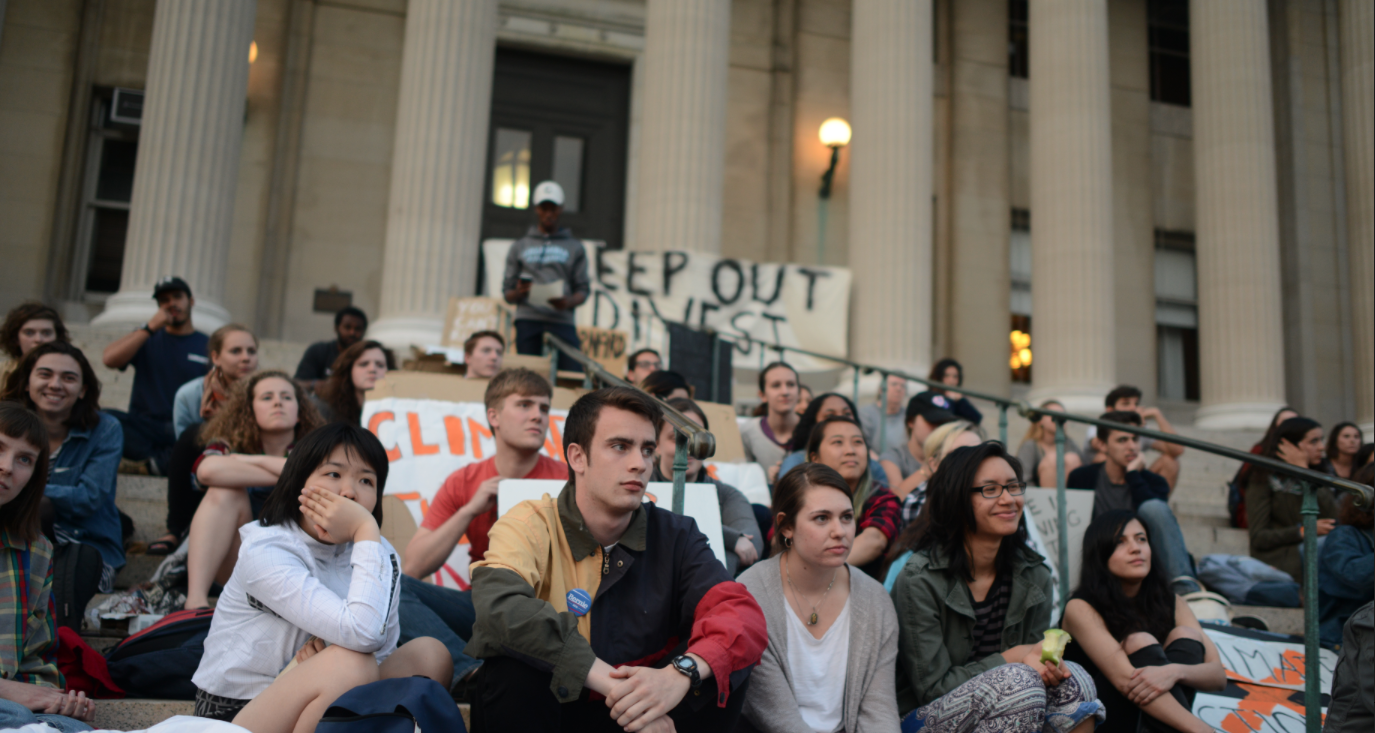 Approximately 100 students came equipped with mattresses, tents, and sleeping bags on Thursday night for "Sleep Out 4 Divest," in which students will sleep out on Low Plaza in solidarity with the six organizers for Columbia Divest for Climate Justice who continue to occupy Low Library.

Six students remain in Low Library and have occupied the building for one week, maintaining that they will not leave until University President Lee Bollinger recommends the University's full divestment from fossil fuel companies. In the fall, the Advisory Committee for Socially Responsible Investing rejected CDCJ's proposal urging full divestment.

Ten Columbia mattresses were laid out behind Alma Mater, and students brought tents, sleeping bags, pillows, and their belongings in preparation to spend the night.

"It was framed as a, 'Come in, come out, and express solidarity for people who are still inside right now and facing serious disciplinary consequences,'" said CDCJ organizer Nikita Perumal, GS '16, who was in the library for the first 50 hours and is now supporting from the outside. 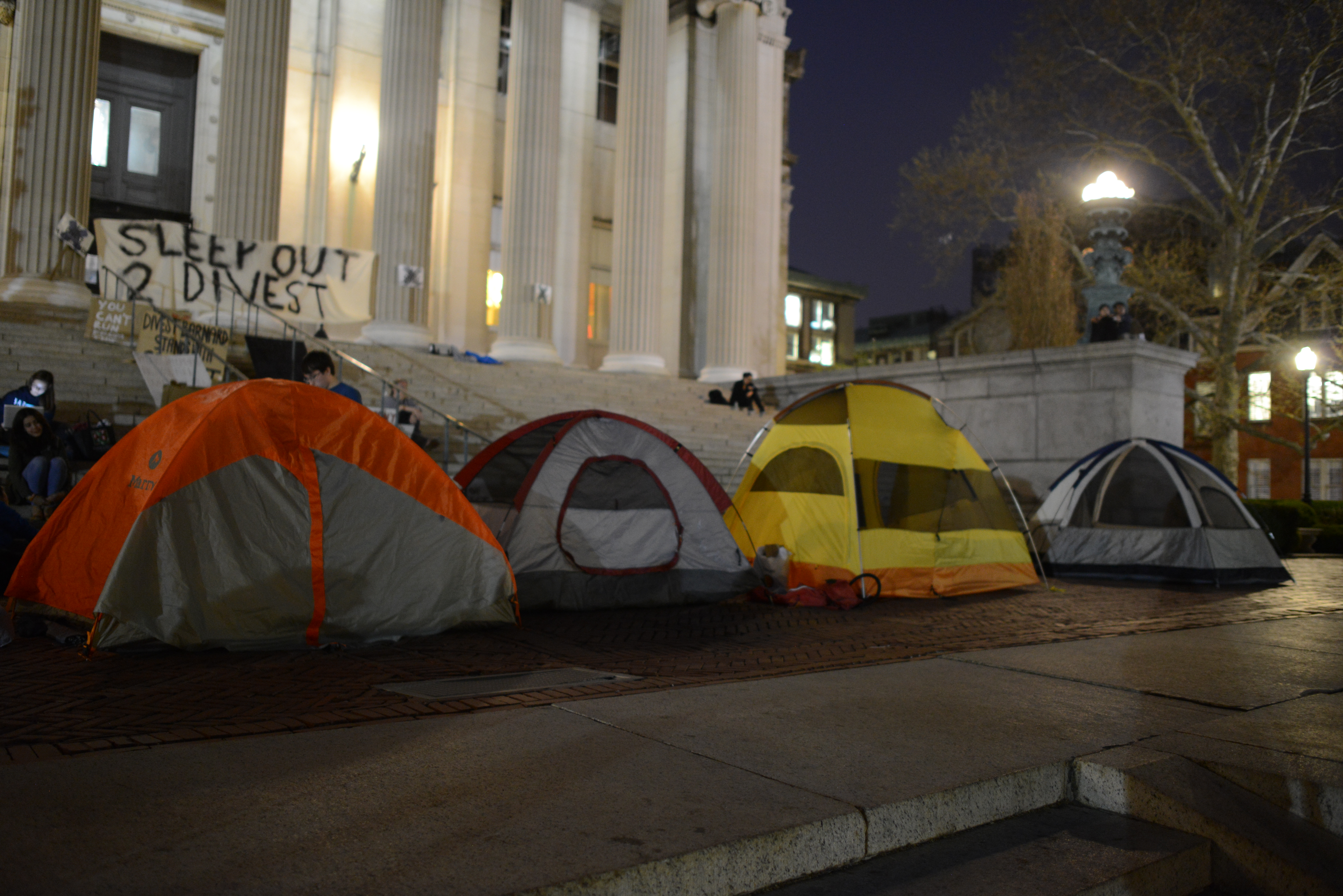 Just after 9 p.m., the nearly 70 people who had showed up gathered in a circle led by CDCJ organizers Daniela Lapidous, CC '16, and Amy Wang, CC '18. After Lapidous led the group in a pledge to express solidarity with the people inside Low, the circle held a moment of silence.

Alluding to the Barnard Columbia Solidarity Network, Lapidous borrowed from a friend's Facebook feed, defining "family" as "when you tell someone about your problem and they work just as hard as you to get it solved."

After everyone in the circle went around and said a few words, Wang read a few words from the CDCJ occupiers who remain inside. She read a letter from Rachel Fifi-Culp, CC '17, who is currently occupying Low and wrote about the flooding her family faces in Houston. She urged Bollinger to be "on the right side of history."

David Maloof, CC '80, stood outside the circle watching and thinking about his time at Columbia. He said that he was on campus for a dinner and stopped by to watch.

"Progress always starts with the young," he said, noting that when he was in college, student activists, including him, worked toward beginning divestment from apartheid South Africa.

"There were all kinds of meetings with President [William] McGill," he said. "We didn't take over a building—that was in '68—but there were protests and shouting matches."

"The moment after we walked into Low on Thursday afternoon, we won," CDCJ organizer Elana Sulakshana, CC '17, said to the circle. "We won because all of you are here." Sulakshana noted that more than 150 faculty members have come out in support of divestment.

By late Thursday night, almost 100 people were gathered on Low Plaza. The circle closed with another moment of silence, during which Wang led the group in a thought exercise, followed by singing and a chanting of "I believe that we will win."

"It's important," said Sam Doss, BC '19, an organizer for Divest Barnard who is sleeping out. "Our campaign is really different, and we have a really different relationship with our administration than CDCJ does, but the issue is the same."

Other clusters of people also sat on the Steps but were not there for the event. Many of the onlookers seemed unaware of the specifics of CDCJ's demands.

"It's really cool to see people turn out. I'm not really informed, but it's nice to see a lot of people are in support," Maram Tayeh, BC '19, said.