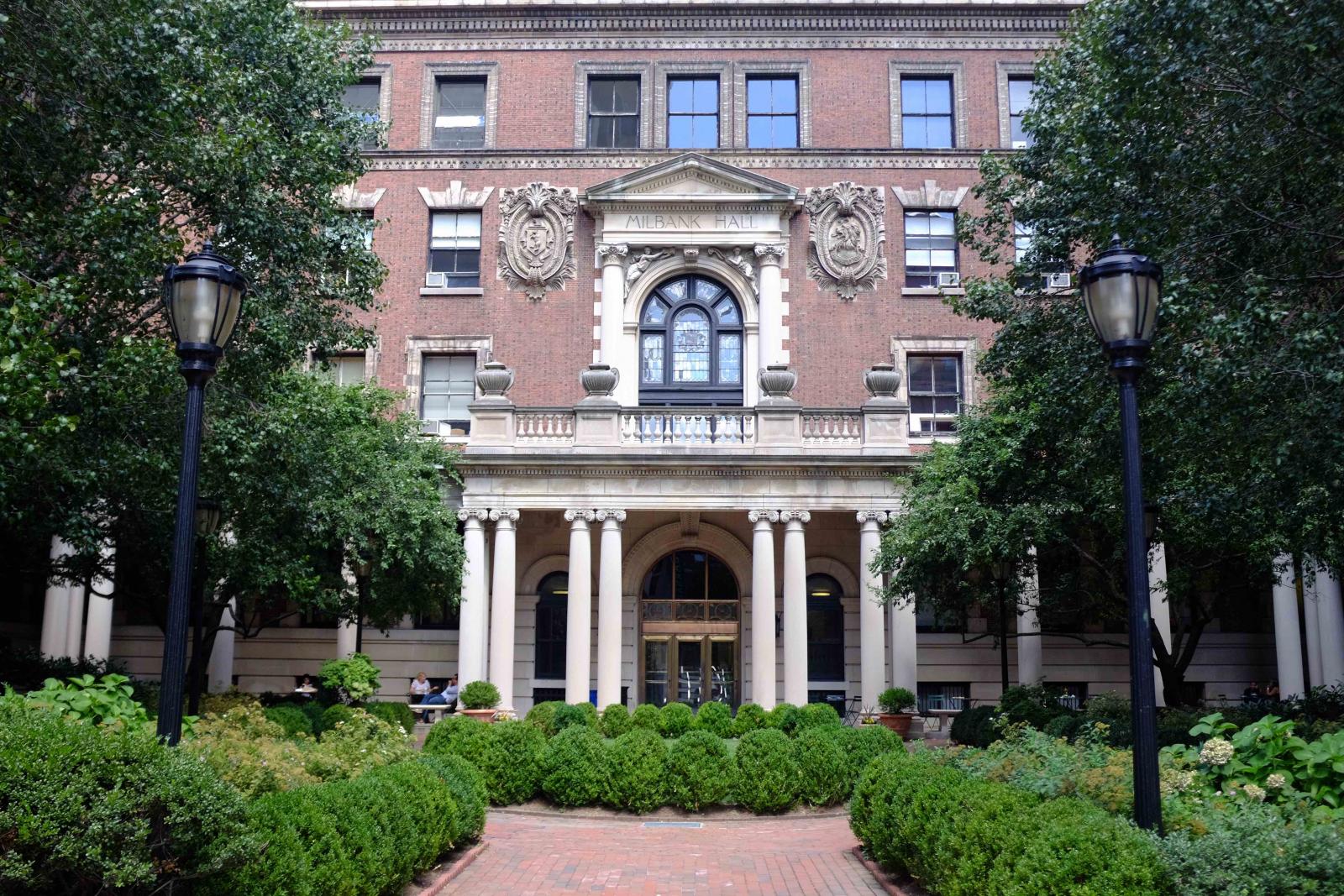 Barnard has unveiled its $400 million capital campaign, The Bold Standard.

The campaign, which has set a goal of raising $400 million, has prioritized four areas of the college to fundraise for: The Teaching and Learning Center, endowment (specifically for financial aid and endowed faculty chairs), annual support, and planned gifts.

While the campaign began its quiet phase in fall 2011, Vice President for Development Bret Silver said the college is planning on completing the campaign in the next two years. The college is already 66 percent toward its goal.

The Bold Standard's fundraising priorities come directly from the college's strategic plan, which was developed shortly after Barnard President Debora Spar took office in 2008, according to Silver.

"Everything that we're raising money for is core to the mission and the work of the college," Silver said in an interview with Spectator. "It really all boils down to teaching and learning and the physical space in which that happens." 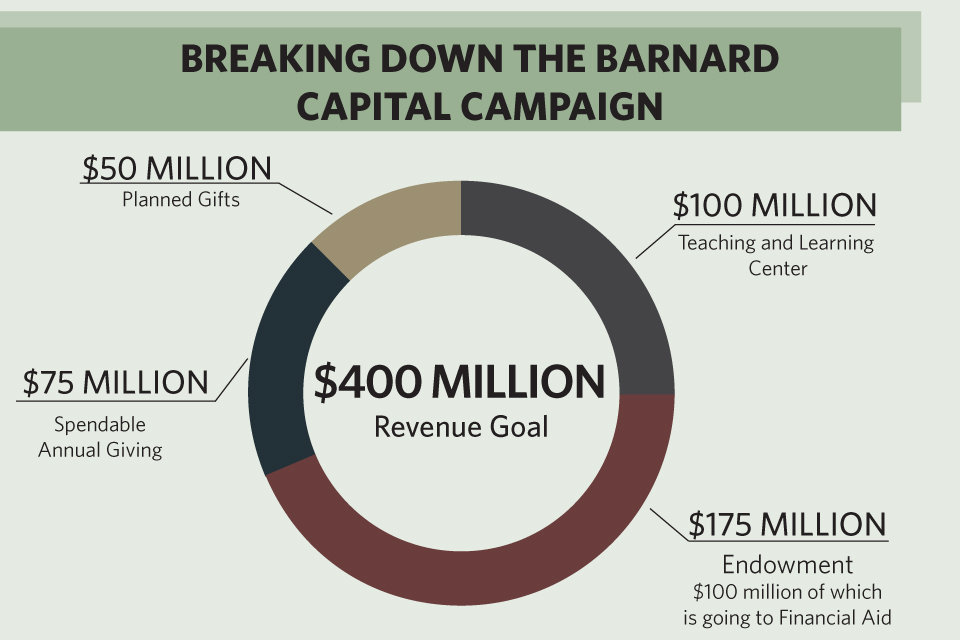 Although Barnard received $70 million in gifts in January to fund the Teaching and Learning Center, the new approximately 132,000 gross square feet building that will replace Lehman Hall by 2018, $100 million of the funds raised by the campaign will go toward financing the $150 million building.

Barnard's $296.5 million endowment still remains much smaller than that of its peer institutions: In 2015, Smith College's endowment was worth $1.782 billion, Wellesley College's was $1.854 billion, and Bryn Mawr's was $853 million.

With the capital campaign, $175 million of the funds raised will go toward bolstering Barnard's endowment. From that amount, $100 million will be dedicated solely to Barnard's need-blind financial aid program. Given that Barnard's tuition fees, room and board will cost $65,992 for the upcoming academic year, Silver said it costs approximately $1.25 million to endow a student's scholarship in its entirety.

Funds raised for the endowment will also be distributed toward faculty support, which Silver said typically means endowed faculty chairs. Barnard has already surpassed its original goal of endowing 10 faculty chairs—the college has already raised enough to endow 11 of them.

The college is looking to raise $75 million in spendable dollars from annual giving, which typically come from donations made by alumnae, parents, and foundations.

While only 27 percent of alumnae donate yearly, Silver said that the college looks more at the aggregate amount of money raised, rather than participation rates.

"If when I look at our metrics and I look at participation rate, if it declines a percentage point by two, it really doesn't bother me because at the same time, we're about to announce that we're 66 percent of the way toward a $400 million goal, which is off the charts successful," Silver said.

"There are fewer people paying into the pot but they're paying in higher dollars," he added. "We'd love 100 percent participation, but you have to decide where you put your energy. You can't focus on everything."

Silver also noted that being a women's college has affected the amount of money Barnard can fundraise from alumnae, particularly due to issues like the wage gap. For example, mid-career alumnae who graduated around the 1960s and 70s are typically the most philanthropic, Silver said, but given the time they entered the workforce, they were not provided the same opportunities as men in terms of careers and salaries.

Though Barnard receives both endowed and spendable dollars, the college can only invest endowed dollars and spend the interest earned from that investment. Spendable dollars, however, can be used to finance the operational needs of the current year.

In the fiscal year of 2015, approximately two-thirds of the donations made to Barnard were spendable, and the other third was endowed.

Barnard is looking to raise $50 million in planned gifts. Also known as deferred gifts, these types of donations are committed to now and given to Barnard at a later date.

"Colleges particularly are appropriate for planned or deferred gifts because if you think about it, you automatically have a lifelong relationship with your college," Silver said. "A museum or a hospital or something, you may like them for awhile and then you may not like them again, but the college you always will have graduated. So you will always be a Barnard alum and we will always know that."

Though there are several different devices in which to give a planned gift, the simplest way to do so is through bequests, whereby the institution is included in a person's will to receive a particular amount of money or proportion of their estate. This can be done either through a stated amount or through a residual percentage that will be given to the college.

Bequests can be revocable, however.

"You can say, I'm leaving Barnard in my will now, but things change, and 30 years later, you know, perhaps your family situations changed, or your financial situation has changed, or your opinion on the world has changed," Silver said. "When we look at doing budget forecasts, you really can't with certainty budget realized bequests."

The campaign was officially unveiled to donors at Barnard's 2016 annual gala on Tuesday, where the college raised more than $3 million to be used for financial aid.

Barnard President Debora Spar also celebrated the launch of the campaign to the greater Barnard community on Wednesday morning. Along with the announcement, the college displayed the campaign's official video and opened a 1959 time capsule from Lehman Hall that contained materials like an old Barnard Bulletin, blue book, and President's Report.

"The Bold Standard is the perfect name for our campaign," Spar said at the gala. "Not only does it speak to the spirit of Barnard women, but it's a direct reflection of the audacity and power of this effort, far and away the largest, most ambitious campaign that Barnard has ever undertaken."