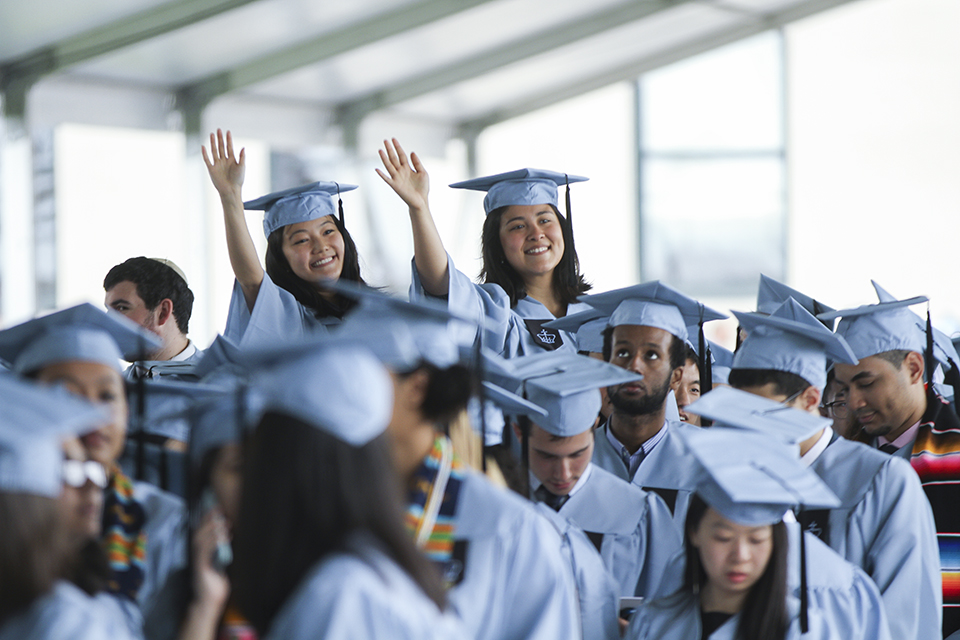 The Columbia College Class of 2016 celebrated graduating on Class Day on Tuesday.

The irony that Dean Baquet—who attended Columbia College but ultimately did not graduate—was standing before the graduating class of 2016 to deliver a keynote address on Tuesday was not lost on him.

Though he noted that journalists often don't like to think about their own lives, Baquet's address struck a somber and self-reflective tone as he described his first few days coming to Columbia as an "aimless and scared" 17-year-old.

"I grew up in a household with no books, parents who did not graduate from high school—I had never been on an airplane, I spent my entire life in all-black, working neighborhoods," Baquet said. "I actually had no luggage, and I did not even own an overcoat when I accepted a scholarship to Columbia."

Baquet added that his grades in college were "not particularly great," but gradually his world began to expand as he gained exposure to different people and learned that the world was wider than he had previously understood.

"I think it was at Columbia that I learned two valuable lessons. Listen and listen hard. And while you shouldn't question your own ethics, you should question your certainty about everything else," he said.

He also encouraged the graduates not to "let ambition blind [them]."

"Don't have your eyes so focused on the goal that you fail to enjoy the journey. Don't be so ambitious for one thing that you fail to see when something better comes along," Baquet said. "Don't let ambition warp your sense of self or your principles. Pay attention when everyone you encounter tells you their ambition is causing them pain, because they're probably right."

In his own speech, Columbia College Dean James Valentini referenced Baquet's unorthodox entry into the world of journalism—Baquet himself said that he "stumbled" into the profession—using it as an example of the beginner's mind he has sought to instill in students.

Valentini, like Baquet, reminded students to question and analyze the beliefs and truths they hold to be certain.

"You are now Columbia College graduates. You have gained much value from each of your experiences here—you are likely not thinking yourselves as beginners, but as experts," he said. "As you commence your life after graduation, I believe you are still beginners."

Perhaps the most emphatic address came from University President Lee Bollinger. Bollinger said that as he has followed the presidential race, his admiration and appreciation for Columbia College and the Core Curriculum have gone "up and up and up."

Bollinger's remarks come one day after Donald Trump, the presumptive Republican presidential nominee, blasted President Barack Obama's statement that "in politics and life, ignorance is not a virtue"—though Bollinger told the audience he didn't want his statement to be taken politically.

"We do not believe you can give any answer to any question you are asked, without being embarrassed," Bollinger said to sustained applause. "We believe you should not personally attack or belittle those you disagree with."

Bollinger said that Columbia is a unique place for those very reasons.

"Imagine what our world would look like if it were mandatory for anyone running for office, especially high office, to spend a gap year taking the Core Curriculum," Bollinger said. "And pass."