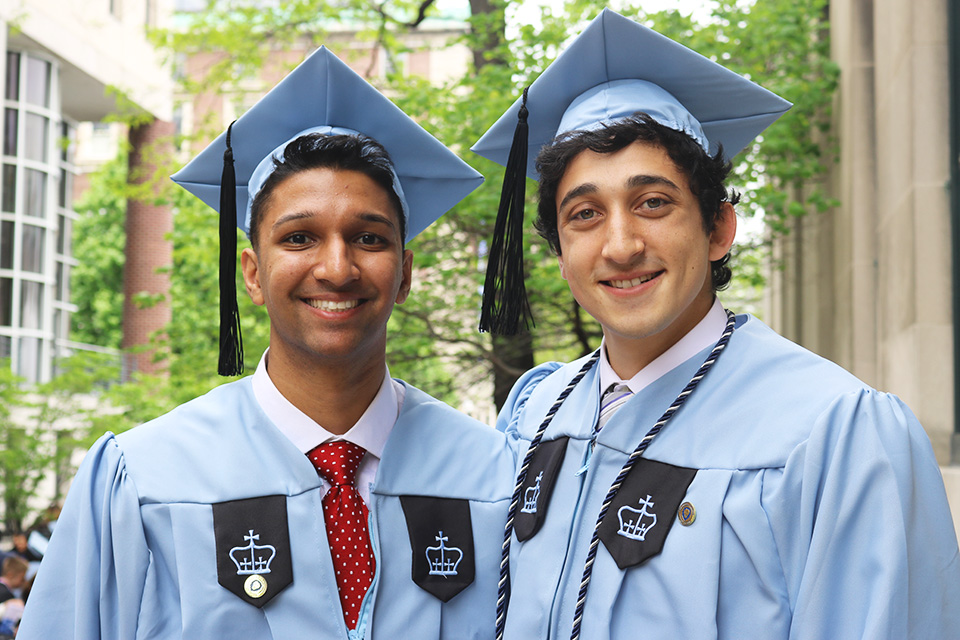 Vivek Ramakrishnan, CC '16, left, and Ben Makansi, CC '16, right, came into CCSC with the express purpose of bringing an outsiders perspective to an organization that favored incumbents.

When the Freedom, Liberty, and Freedom Party, led by Ben Makansi, CC '16, and Vivek Ramakrishnan, CC '16, appeared on the ticket for the Columbia College Student Council executive board elections, very few students—including Makansi and Ramakrishnan themselves—expected them to win.

Makansi and Ramakrishnan ran on a satirical ticket bent on highlighting the fact that most students didn't actually care about the council, and incorporated memes and patriotism into their campaign. But rather than take an unorthodox route for the sake of being funny, Makansi and Ramakrishnan wanted to understand why students didn't think student council was worth caring about.

"I think a lot of people saw us as meatheads who were going to mess around, but we knew from the get-go that we were going to take it seriously if we actually got in there," Ramakrishnan said.

The pair came into CCSC with the express purpose of bringing an outsider's perspective to an organization that favored incumbents.

Ramakrishnan said that Makansi had a clear vision of how he wanted to bring about change in CCSC.

"He was really passionate about putting council out there in a way that is still effective but not uptight, getting work done but presenting it in a way that didn't make us seem too serious," Ramakrishnan said.

Though lighthearted issues such as bringing thicker toilet paper to campus were on Makansi and Ramakrishnan's agenda, the duo tackled a range of issues that addressed the heart of the changes that Columbia College students wanted to see on campus.

Together with leadership from General Studies Student Council and the Engineering Student Council, Makansi and Ramakrishnan spearheaded efforts to address food insecurity on Columbia's campus through the creation of programs like the Emergency Meal Fund and the meal sharing app Swipes.

Makansi and Ramakrishnan also played a large role in advocating for the subsidization of tickets for Senior Ball for low-income students and the 90 lecture courses that will be offered for four credits, instead of three, in the fall.

But along with the substantial policy changes that CCSC was able to accomplish this year, Makansi and Ramakrishnan still upheld their desire to keep council lighthearted with humorous weekly council emails and motions to pass policies like removing weed from the list of banned substances in the dorms and making Cannon's "accessible to students beyond Columbia freshmen and Manhattan College people."

Though Makansi and Ramakrishnan are best known for their partnership in CCSC, the two first bonded over their mutual love of soccer. During NSOP, they met after playing against each other in a pickup game at Riverside Park, where they played the same position on opposing teams.

"I was crazy about soccer and really competitive in high school, so at these pickup games I would kind of dominate them," Makansi said. "Viv came and played and he and I were battling for the ball and stuff and I was like, 'Who is this kid who thinks he's good? Who is this little shit who can actually turn the ball and has vision?'"

From there, they formed an intramural team and quickly became close friends.

"Freshman spring, there was actually not a single 24-hour period when we didn't see each other," Makansi said. "We did have quite the bromance freshman year."

Makansi and Ramakrishnan first ran on a satirical ticket for sophomore class council, but narrowly lost to Saaket Pradhan, CC '16. But the loss only made the duo realize they could accomplish more if they ran for executive board the next time around, even if they weren't hopeful they'd win.

"In class council, you can crack jokes about toilet paper, Manhattanville," Ramakrishnan said. "You can do the same with E-board, but there are also a lot of serious issues—mental health, divestment, academic stress."

"Just the nature of the position itself lent a certain seriousness that we couldn't avoid," he added. "When we ran for the position, we were very well-aware of that."

Their campaign ultimately resonated with students, and, in a surprise victory, Makansi and Ramakrishnan narrowly edged out the incumbent council leaders by 1.6 percent.

When Ramakrishnan and Makansi realized they had won, they found themselves confronted by a critical question—how to broach the balance between satire and effective governance.

"It's definitely easier to make fun of CCSC when you're not in CCSC. How are we going to make fun of what we're doing if we want students to pay attention to what we're doing?" Makansi said. "The election itself was controversial, it was pretty polarizing. It was also close, so it wasn't like a big green light to uproot CCSC and change the way it works."

But in the days leading up to this year's CCSC elections, Makansi  expressed concern that perhaps the ideology behind the Freedom, Liberty, and Freedom Party—encouraging outsiders to bring a fresh and critical eye to council—would not continue after they graduated from Columbia.

In an interview with Spectator, Makansi criticized the still-prevalent resume-building culture of CCSC—something his campaign had satirized more than a year ago.

"I don't know how things are going to be going forward. I look back at some of the failures of this past year and if we're honest, there were still some people on student council who didn't do nearly as much as they should have," Makansi said. "Sometimes I wonder—it keeps me up at night—I wonder if that was a result of a shortcoming of my leadership or whether it was a result of the kind of people that get attracted to student council, and whether that's something that will ever change."

Still, Makansi said he and Ramakrishnan led CCSC focused on their election promises.