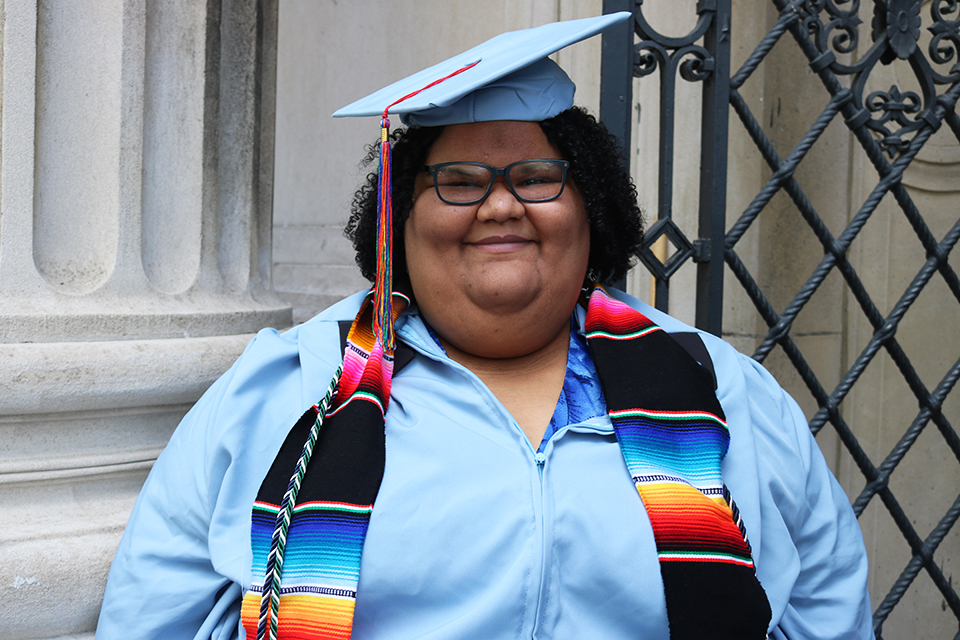 Over the course of her career at Columbia, Jess Silfa, GS '16, joined and established groups that advocated for students like her, including first-generation, low-income, queer, and disabled students.

For Jess Silfa, GS '16, graduating from Columbia is the fulfillment of a dream she has had since high school, when she participated in Upward Bound, a program that offers courses and assistance to public high school students through the University's Double Discovery Center.

"I was like, 'This is where I belong,'" Silfa said. "I loved how brilliant the faculty seemed, I loved the spaces, the campus. I loved how challenged I felt."

But Silfa's mother fell ill, and Silfa had no choice but to drop out of high school to take care of her and help raise her brother. She did so for over 10 years while working toward her GED, eventually enrolling in community college.

There, an adviser who saw potential in her encouraged her to apply to a four-year college. Silfa immediately began exploring her options as a GED-holder, and through her research she learned of Columbia's School of General Studies.

In the years that followed, Silfa dedicated herself to fulfilling the dream that began in high school. Inspired by her brother, who is special-needs, she majored in psychology and has also pursued her passion for creative writing in her spare time.

Over the course of her career at Columbia, Silfa joined and established groups that advocated for students like her, including first-generation, low-income, queer, and disabled students.

During her second semester on campus, she co-founded GS Alliance, an organization for nontraditional LGBTQ students, and has spent every semester since on its executive board.

"We felt that it was needed because there are and were so many queer spaces on this campus, but every time nontraditional students walked into the room, we felt a little awkward. The problems we had were different: Are we ready to adopt children? Are we ready to get married?" Silfa said. "We needed our own space to discuss our own issues."

Silfa took other steps to create and strengthen student communities by working at the Office of Multicultural Affairs, joining LGBTQ@Columbia, and serving as the community outreach editor for Quarto, where she pushed the magazine to source writing from students outside the creative writing department.

"I've just always wanted to try to create community here as much as possible," Silfa said.

Last year, Silfa penned a Spectator op-ed pointing out that Columbia First-Generation Low-Income Partnership failed to adequately weigh the needs of nontraditional students. As a result, FLIP invited her to sit in on meetings and, the following year, join its board as a GS representative, which she accepted.

Through her involvement in FLIP, Silfa co-chaired a committee to increase resources for food-insecure students. She also served as chair of FLIP's homelessness committee and lobbied the Barnard administration to change its winter break housing policy, which left some students without housing options over break. The policy was officially changed in late April.

Silfa's activism did not stop there—last fall, she founded the Disability Advocacy and Support Network, a group that aims to both press administrators to make campus more accessible and provide a community for disabled students. Silfa also joined a subcommittee of the University Senate's Student Affairs Committee that will suggest administrative actions to increase campus accessibility.

"That's been a lot of needed work," Silfa said. "There are always administrators who come to the meetings, and I feel that they're hearing us."

In the time she does not devote to advocacy, Silfa has been writing a novel that she hopes to continue as she pursues her master's in creative writing as a Truman Capote fellow at Brooklyn College. An excerpt from this novel, which Silfa self-published as a zine titled "Here All Is Familiar," was acquired by Columbia Libraries in 2012.

"My dream is to graduate from the M.F.A. program in two years with an agent and then hopefully have a book under contract by 2020. I feel like those are realistic goals," Silfa said.

Reflecting on the campuswide changes she worked toward during her time at Columbia, Silfa believes there is more to be done, but said she is hopeful about the University's future.

"I really hope Columbia recognizes the ways it needs to change and who needs support from it. ... I hope Columbia improves its facilities and makes them more accessible," Silfa said.

"Be nice to one another. Care for one another," Silfa said. "The things I'm going to remember from my time here are the people who were nice."