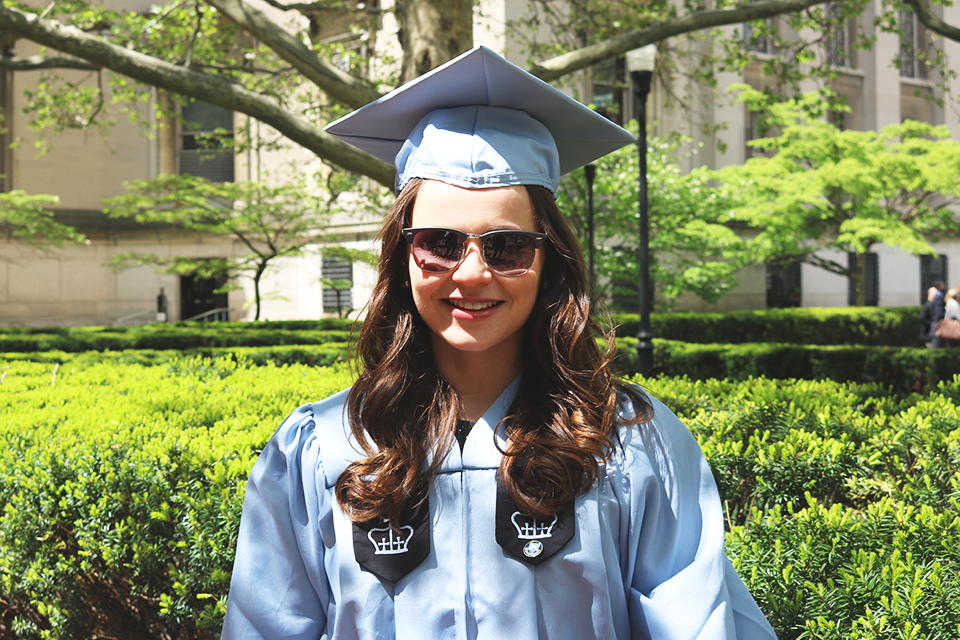 Sasha Cohen, an Olympic silver medalist, found a passion for political science at the School of General Studies.

When Sasha Cohen first came to Columbia, she was baffled by how much she would have to do sitting down in order to earn her degree.

Cohen, GS '16, a three-time world championship medalist in figure skating, was accustomed to a much more active lifestyle. Her days throughout her late teens and early twenties had been organized around her rigorous training schedules, which included daily running, skating, yoga, and physical therapy.

After a decorated skating career during which she won silver at the 2006 Winter Olympics in Turin, Italy and was a two-time silver medalist at the World Figure Skating Championships, Cohen toured the world. In 2011, however, she decided to retire from the world of skating and get a college degree, like the rest of her family. She was touring in California, where she grew up, when she decided she wanted to be in New York, and settled immediately on General Studies.

"It seemed like a great fit for me, and I knew I wanted to be in New York," Cohen said, "Columbia seemed like a wonderful environment. I also really admired GS as a program because it was geared towards people who had taken the less traveled path and did something before going to school."

Cohen added that her grandfather and her sister Natalia Cohen, BC '10, had attended Columbia and Barnard, respectively.

In order to transition from the life of a professional athlete to that of a full-time student, Cohen started out taking two classes and, gradually over the course of her time at Columbia, worked up to taking 14 credits a semester.

"Your body adjusts," she said. "Having to sit still for so long was not easy on my body at first."

Despite the physical challenges of the adjustment to student life, Cohen said that she immediately felt inspired by her peers and the environment at Columbia.

"Columbia has brilliant, motivated people aligned around political issues and academia," she said. "It has been a wonderful space to learn and really grow as a person."

At Columbia, Cohen feels that she has been able to find her interests and be around like-minded people going through that same journey. She came to college thinking that she wanted to be an economics major. But after she started working her way through the Core Curriculum, she found that her interests lay more in philosophy and politics.

"[Contemporary Civilization] really opened me up to philosophy and through philosophy, ethics, and then Justice with David Johnston, I began to be more politically inclined. I became interested in understanding the way that the rules are written and the way that they exclude certain people," Cohen said.

Cohen, a political science major, finished off her final year at Columbia studying the history of poverty, race, gender, and the politics of income inequality.

"It's a little depressing, but very interesting," she said. "It's good—being at Columbia has really opened up my eyes and expanded my perspective on social and political issues."

In a class of around 40 students, Nadasen noted, Cohen stood out as always having a question or comment, making it clear that she did the reading "intently and thoughtfully."

"I was really appreciative of students who could actually think seriously about the questions of intersectionality in our society, and I think [she] did," Nadasen said.

Judith Russell, a lecturer in political science, echoed the same sentiments. Russell taught her in a small political science seminar for seniors on income inequality.  She referred to Cohen as a "key member in the class."

Russell also noted that she did not know Cohen's accomplishments as a figure skater until the second-to-last class.

"I met with her a lot over the semester," Russell said. "She was diligent and resourceful about meeting to frequently raise issues and questions about the paper topics and the readings."

While Cohen did not participate much in student life—she lived off campus throughout her time at Columbia and was on tour part of the time—she feels that the school's ethos of public service and social justice strongly influenced her.

As she now looks toward the next phase of her career, Cohen said that such issues are certainly on her mind. Though Cohen does not have set plans for the future, she said that she thinks she will go into the media broadcasting industry.

"What that is specifically, time will tell," Cohen said. "I am interested in telling people's stories that aren't told."