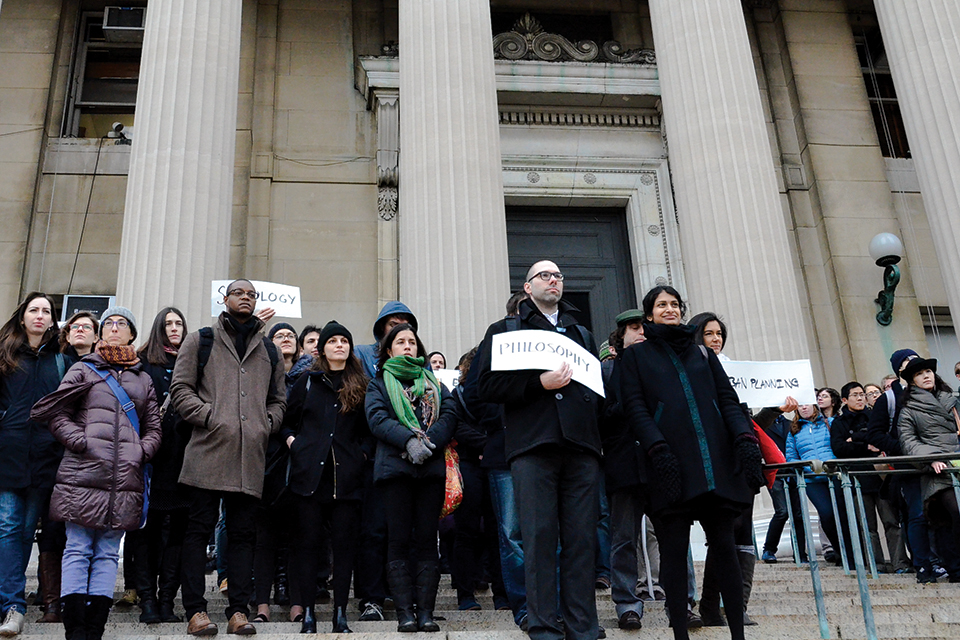 The NLRB ruled in August that graduate students at Columbia and other private universities have the right to form a union.

As Columbia graduate students prepare to vote on whether they should form a union, two long-standing debates have reemerged on campus, centered on the role of the graduate student at the University and whether unionization would pose a threat to academic freedom within the classroom.

An election determining whether Columbia graduate students will unionize is expected to be held this fall, prompting both Graduate Workers of Columbia and University administrators to begin campaigning in the hopes of persuading graduate students.

GWC has drawn on the support of elected officials like Rep. Jerry Nadler, while Provost John Coatsworth's office rolled out a website for graduate students explaining how unionization would affect the University. Administrators including Coatsworth, Graduate School of Arts and Sciences Dean Carlos Alonso, and University President Lee Bollinger have all vocalized their opposition to unionization.

According to University administrators, unionization would devalue the relationship from student and faculty member to that of employee and employer. The work that graduate teaching and research assistants do is an essential part of their education as academics, and therefore, the University says, they should not be recognized as employees.

"I don't think a union would mean the end of civilization as we know it, but it undermines an important aspect of academic experience," Coatsworth said. "It's cumbersome to administer."

"The meaning behind the work is different—they're doing this to learn, to become proficient in teaching and research," Alonso said. "Our belief is that what is being called work by the NLRB is in fact part of a consistent and well-developed system for forming intellectual teachers and researchers."

For graduate students leading the fight to unionize, the meaning behind the work holds no significance. Because they are engaged in work for the University, they deserve to collectively bargain as employees, they argued to the NLRB.

The five-person NLRB, comprised of members appointed by President Barack Obama, rejected the University's stance in August. But the Board has changed its stance on graduate student unionization three times in the last 12 years as its membership has changed.

Throughout those changes, universities and graduate students have contested whether unionization would pose a threat to academic freedom.

In an amicus brief submitted by six Ivy League universities, Stanford, and MIT, the institutions argued that imposing collective bargaining with graduate assistants on private sector institutions would "impermissibly intrude into their academic freedom."

The brief described a hypothetical in which a professor changed the format of a multiple choice exam to short answer. Unionized graduate students could file a grievance claiming that the requirement to grade essay questions would impermissibly expand the assistants' workload.

The NLRB attempted to address that concern in their ruling last month and pointed to clauses in public universities' bargaining agreements that explicitly give administrators control over academic decisions.

"There is no good reason to doubt that unions and universities will be able to negotiate contract language to delineate mutually satisfactory boundaries of their respective rights and obligations," the ruling said. "Indeed, faculty members have successfully negotiated collective-bargaining agreements that address terms and conditions of employment at private universities while contractually ensuring academic freedom for decades."

But for Alonso, even with such a provision in place, universities' academic freedom could still be threatened.

"The clause you're describing assumes you can draw a bright line between academic and labor issues, and that is the crux of this matter," Alonso said. "The fact that we are in a situation where these two things are implicated together regardless of that clause sets the stage for muddy waters."

However, the dissenting board members in the 2004 Brown decision, which ruled that graduate students were not employees, argued that there was "no empirical evidence" showing that unions are a threat to academic freedom, citing the American Association of University Professors.

Ron Meisburg, who served as NLRB general counsel under the Bush and Obama administrations, said that the ruling creates a fair amount of uncertainty about what graduate students could demand.

"When a union has the power to request various and sundry terms for graduate students—I don't know that they're willing to say, 'That's off the table,'" Meisburg said.

In a press conference held in August after the Columbia decision was announced, history professor Eric Foner expressed his support for the GWC and said that he assumed that the union would look to bargain over the "bread and butter issues," including health insurance and wages.

However, when asked if the graduate students in the union would consider agreeing to such a stipulation, Andrea Crow, a graduate student organizer with GWC, declined to answer directly.

"Our contract will look similar to contracts of unions at other universities," Crow said. "We're going to argue for what we want."