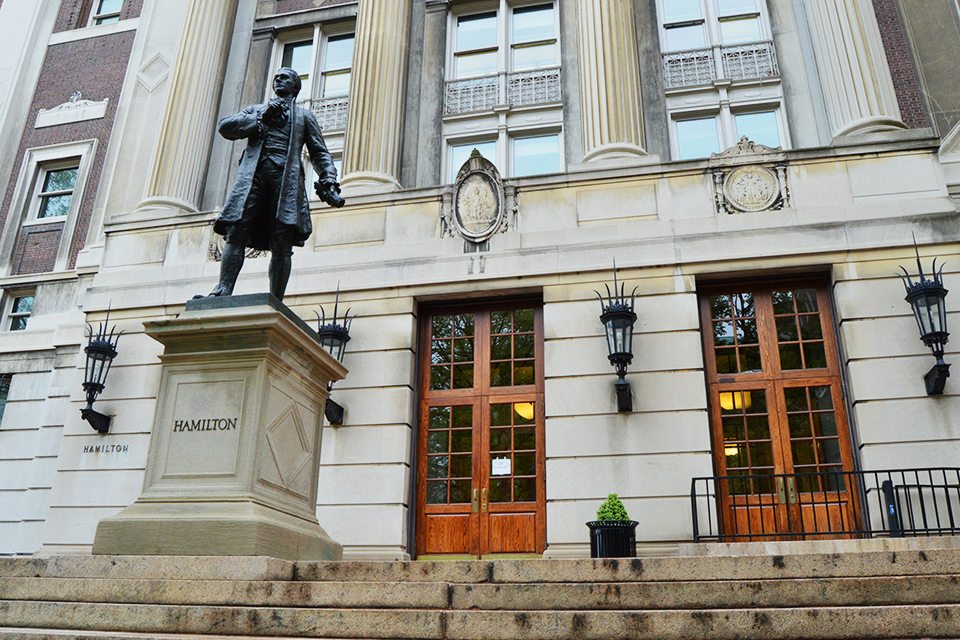 A new and undisclosed policies will allow students fulfill major requirements for two separate academic departments with a single class.

Two new policies, unannounced as of yet by administrators, will lower the number of credits students in Columbia College and the School of General Studies can take per semester and allow them to fulfill major requirements for two separate academic departments with a single class, Spectator has found.

Though the Committee on Instruction, which is responsible for all policy changes regarding majors, academic programming, and courses, approved the double-counting policy in May, no steps have been taken to implement it. Members of the COI, speaking confidentially to Spectator, said that the implementation of that policy has been delayed because the COI wanted to release both policies at the same time, and they have not decided on what number to lower the credit cap to.

It is unclear why the COI has not announced their decision to approve the double-counting policy until a new cap is confirmed. Announcing the policy in May, when it was approved, would have had a significant effect on course decisions for double majors—and in particular, first-years, who registered for classes last week.

Columbia College Dean and Co-Chair of the COI James Valentini, declined to comment on either of the two policies or when they will be implemented.

"The deans of Columbia College and General Studies have asked the Committee on Instruction to advise them about academic course work loads and about major requirements, and the COI is discussing these things," Valentini told Spectator.

For Josh Nacht, CC '20, a first-year planning on double majoring in political science and Middle Eastern, South Asian, and African Studies, being able to double count would have been helpful as he planned out his schedule.

"Double counting would greatly ease my schedule," Nacht said. "There are tons of courses that apply to both Middle Eastern studies and political science, and I'd like credit where credit is due in both of my departments."

Michelle Yan, CC '20, is currently registered in six classes in order to accommodate a double major and a concentration, as well as her plans to spend a semester abroad.

"[Double counting] would completely cut down the number of classes I'm taking," Yan said. "I'm planning to pursue a special concentration in business management, the electives of which cannot be double counted towards my financial economics major."

Chapman Hughes, CC '18, who is planning to double major in the history and English and comparative literature departments, said that this policy would have lightened her course load significantly and allowed for more time to explore electives or pursue an internship.

"I might end up having to minor in English instead of majoring in it, just depending on how second semester senior year goes," Hughes said. "[Double counting] would also help give me more time if I wanted to write a thesis in both, so that's where I think I'll struggle next year."

Students and administrators have acknowledged that Columbia's graduation requirements—a minimum of 124 credits and 128 credits for the college and the School of Engineering and the Applied Sciences, respectively—are among the highest in the Ivy League. These requirements, combined with factors including a lack of social spaces and a highly competitive student body, have contributed to a stressful campus environment.

In response to the 2015 Quality of Life Survey, which highlighted these issues, Columbia students reported feeling "worried, tense, or anxious" for an average of 9.32 days per month, and undergraduates said they did not get enough sleep on an average of 14.18 nights per month.

The COI has made some effort in the past to reduce the number of credits students take per semester, including offering lecture courses with a required discussion section for four credits instead of three.