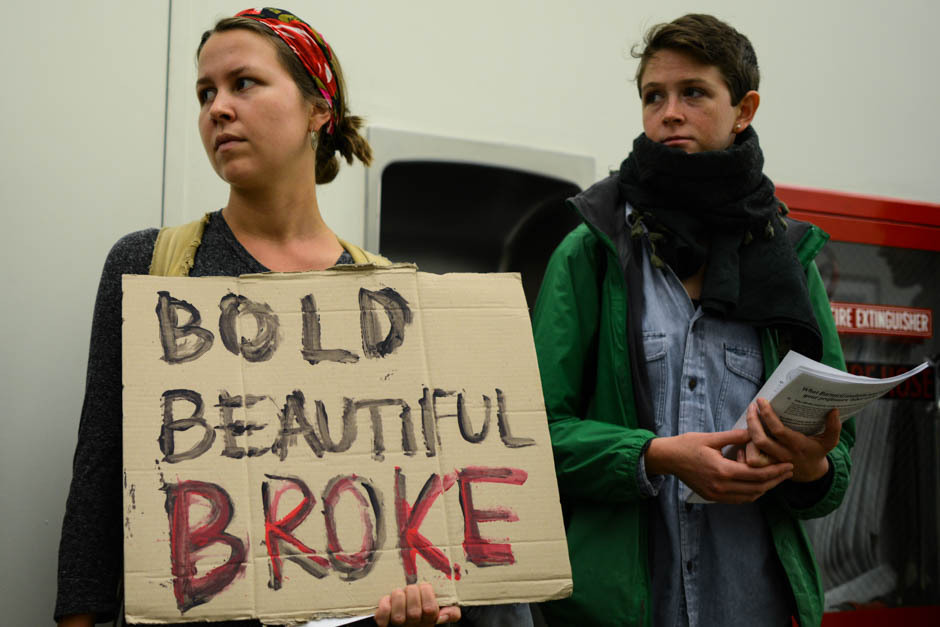 On Tuesday, protesters were present at an event in the Diana Center commemorating the 20th anniversary of a strike led by a support staff union at Barnard.

When cheers erupted during former Barnard president Judith Shapiro's commencement address in 1996, they weren't for her speech—rather, people were cheering for banners that students famously unfurled from Barnard and Lehman Halls criticizing Shapiro's stance on negotiations with the United Auto Workers Local 2110 union.

For seven months in the winter of 1995 and spring of 1996, Barnard's support staff workers—such as administrative assistants and desk attendants—engaged in two strikes to protest a union contract the college was proposing. The contract would have forced these workers to pay for the health care premiums on their insurance plans.

It wasn't until Sept. 16, 1996, that the union ratified its contract. Now, 20 years later, members of the Barnard Contingent Faculty union—comprised of adjunct and full-time non-tenured faculty—are considering striking as they continue to negotiate with the college over a first contract.

The contingent faculty union held an event in honor of the 1996 strike on Tuesday, attended by individuals involved in the support staff contract negotiations and strike. Shortly before the event, the union—along with members of Student-Worker Solidarity—delivered a petition calling on the college to negotiate with BCF-UAW "in good faith" to Barnard President Debora Spar's office. The petition was signed by over 800 alumni.

The contingent faculty union has been locked in negotiations with the college for the last seven months. Although both groups have expressed desires to reach a fair contract, they have yet to come to an agreement.

Adjunct English lecturer Georgette Fleischer, a member of the union's bargaining committee, said that the two parties have not made progress on the health insurance portion of the contract.

"This is what we're facing now—we're facing having to go on a strike in order to get a fair contract," she said.

Adjunct faculty at both Barnard and Columbia currently do not receive benefits, which include health insurance. However, select term and titled faculty who are a part of the contingent faculty union do receive benefits.

In an interview with Spectator earlier in September, Barnard Provost Linda Bell said she believes that a fair contract would provide contingent faculty with a salary above the median rate at comparable institutions.

"We are really committed to giving our community, our contingent faculty, the very best contract, a competitive first contract that we would judge fair—not based necessarily on the value of their labor, but something that's considered competitive, that honors and places them at or above what comparable adjunct workers make at comparable institutions," Bell said.

For former Local 2110 Union Chairperson Sharon Walls, who worked as a health benefit clerk in the Barnard controller's office, the 1996 strike was an important step in securing a contract that was amenable to the union.

"Power concedes nothing without demands," she said. "We fought and we will do it again."

At the height of the 1996 strike, 98 percent of Barnard's classes were moved off campus to allow professors to continue teaching without crossing the picket line, according to former assistant to the dean of studies and current environmental science departmental assistant Catherine Cook, BC '86.

Adjunct dance lecturer Margaret Morrison, BC '83, said that she is heartened by the concern that some students and alumni have expressed about the union's current negotiations.

"I felt the anti-union behavior [during my time as a student], the anti-woman behavior—I know that other alums are appalled by what the administration is doing here," Morrison said. "They [the students] care also, they care desperately, they want to work toward a fair world."

Student-Worker Solidarity member Sasha Hill, BC '17, said that students today are still concerned with the well-being of their professors.

"Students are shocked to find out the conditions our professors are working under," Hill said. "The teachers are why we're here—the fact that they're being underpaid and mistreated and disrespected is not okay to students."

However, Bell said earlier in September that while financial implications pose a barrier to moving forward with negotiations, the college remains cognizant of the important role that contingent faculty play in educating students.

"Unfortunately, we can't look at things in isolation, and we need to look at pay in the market, we have to look at our pay versus other people's pay," Bell said. "What I want to do, really hard, is to work with the union to come up with a fair contract, the contract that honors their commitment, since they are committed faculty members that have been here multiple years."

Fleischer, who has been employed by the college for 17 years, praised the Local 2110 strike as a strong example for the contingent faculty union to follow. The union will have another negotiation session with the college on Friday.

"It's reassuring to know that we're not alone, but we are in the midst of a battle royal over a fair contract," she said.