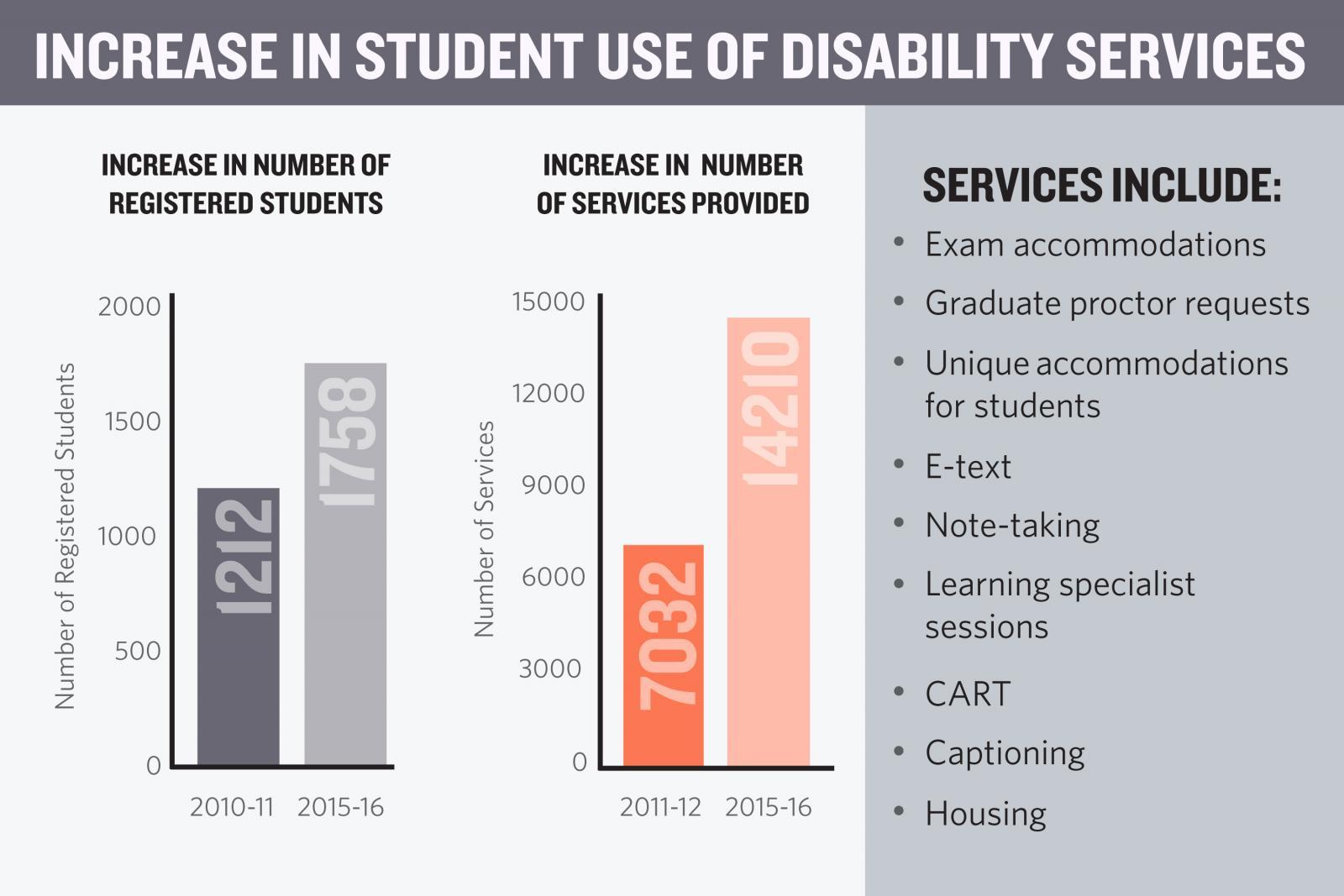 The number of students registered with the Office of Disability Services reached a record high at the end of the 2015-16 academic year.

The number of students registered with the Office of Disability Services reached a record high at the end of the 2015-16 academic year, marking a 45 percent increase over the past five years.

The number of students receiving accommodations from the office has risen to 1,758 from just over 1,200 at the end of the 2010-11 school year, according to Assistant Vice President and Director of Health Dr. Melanie Bernitz.

According to Bernitz, the number of students receiving each of these services has increased steadily every year. The total number of services provided throughout the 2015-16 year was 14,210, a 202 percent increase from the 2010-11 academic year.

To meet the growing number of students registered with the office, ODS has gradually increased staffing. Most recently, a new coordinator position was created prior to this academic year, according to Vice President for Campus Services Scott Wright. The office now staffs 15 administrators and coordinators in total.

The office has also changed its practices, purchasing new technology in recent years for services like e-texts, according to Bernitz.

"We're making sure we're staffed, we're making sure that we continue to listen to students and understand what the student need is making sure that our services are that gold standard service for the current time," Bernitz said. "Because again, what we were offering back in 2010 may be different than what's needed."

While Bernitz said she was unsure what has driven more students to register with ODS, the increase corresponds to a national trend across college campuses. One possible explanation is that reduced stigma surrounding disabilities encourages students to seek accommodations, according to National Center for Learning Disabilities President and CEO Mimi Corcoran.

"I think what's really remarkable and incredibly exciting is that people are advocating for these accommodations and being willing to step out, because around disabilities, there's so much stigma," Corcoran said in an interview with Spectator. "They're standing up for their rights. And I hope the University is responding in kind."

The surge in students registering may not reflect a rise in the number of students who have disabilities, but rather that a greater number of Columbia students feels comfortable advocating for accommodations than before, according to NCLD Senior Director of Learning Resources and Research Dr. Sheldon Horowitz.

"We know there are lots of kids who acknowledge that they have a learning disability when they're in high school. They go off to college, and only maybe a quarter of them immediately disclose and get the services that they need," Horowitz said.

University Senator Ramond Curtis, GS '19, is registered with ODS and chairs a senate subcommittee for students with disabilities. Curtis said he believes disability issues have become increasingly visible thanks to student efforts—like the founding of the Disability Action Support Network last fall—as well as ODS's own advertisement of its services.

"Stigma going down is absolutely a trend we've seen. We've seen the numbers go up, and more students know that ODS exists. That came from getting the word out there," Curtis said. "And a part of that was from the students and the work that they did, and I'm sure it can be assumed that a part of that has been from the outreach that ODS has started to do more of."

Curtis added that as the number of those registered to receive accommodations increases, it will be necessary to continue to gauge student need and expand support.

"What we want to focus on is making sure that, as a school, we're keeping track of the rise in students using ODS," Curtis said. "It's important that we make sure that we're accommodating those new students with an increase in resources."