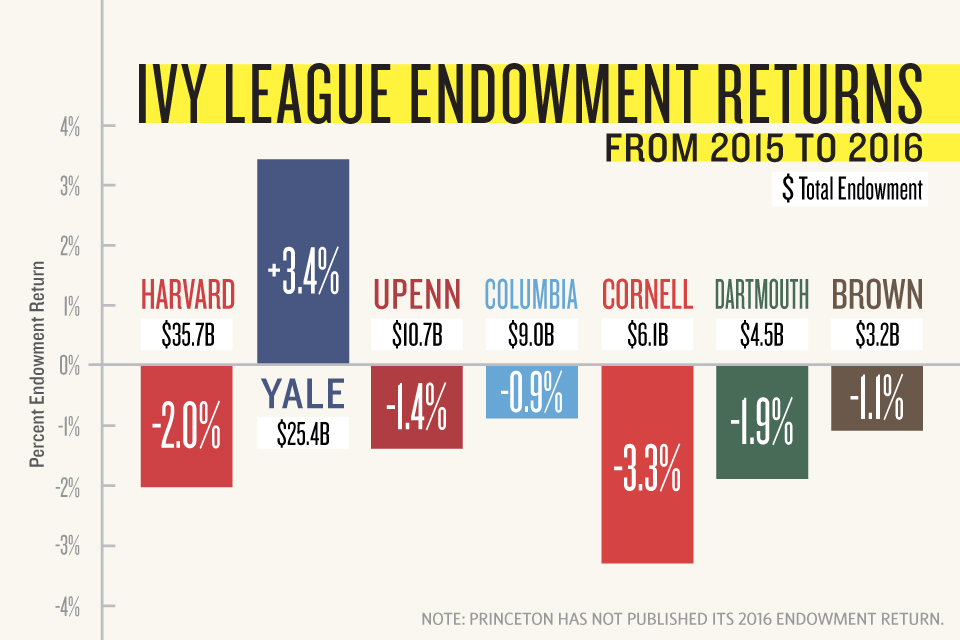 Columbia's endowment reported a .9 percent loss for the 2016 fiscal year.

The loss is the smallest posted among its Ivy League peers, with the exception of Yale, who reported a 3.4 percent gain on their investments. The value of Columbia's fund, previously estimated at $9.6 billion, dropped to $9 billion for the year through June 30.

For many, Wednesday's report underlines the skill of the University endowment's departing chief executive officer, Nirmal P. "Narv" Narvekar. The University announced last week that Narvekar, who has managed Columbia's endowment since 2002, would leave to manage Harvard's struggling $35.7 billion endowment.

"Narv and the team have done a consistently good job for many years delivering top returns," Charles Skorina, an executive recruiter for endowments, said in an interview with Spectator.

Though Columbia has declined to release many details about its investment strategy—including asset allocation figures—Skorina said that, broadly speaking, it matches that of Yale's model—highly diversified and "heavily tilted towards private markets."

"Narv has said, 'We can't be all things to all people,' and has put some money in the S&P index, but we can meet, cultivate, and invest with some good investors in real estate, venture capitalism, and that's what they've done with excellent results for many years," he said.

Peter Holland, Columbia's longtime chief investment officer, who has stepped in to head the University's endowment, will be well positioned to continue the University's success, according to Skorina.

"Unlike best practices in American corporations, very few endowments and foundations boards and CEOs hire, train, and have at the ready their successor.  Narv and Columbia are the exception, and I commend him and the board for it," he said. "It's really rare, it's really good, and it reflects very well on Columbia."