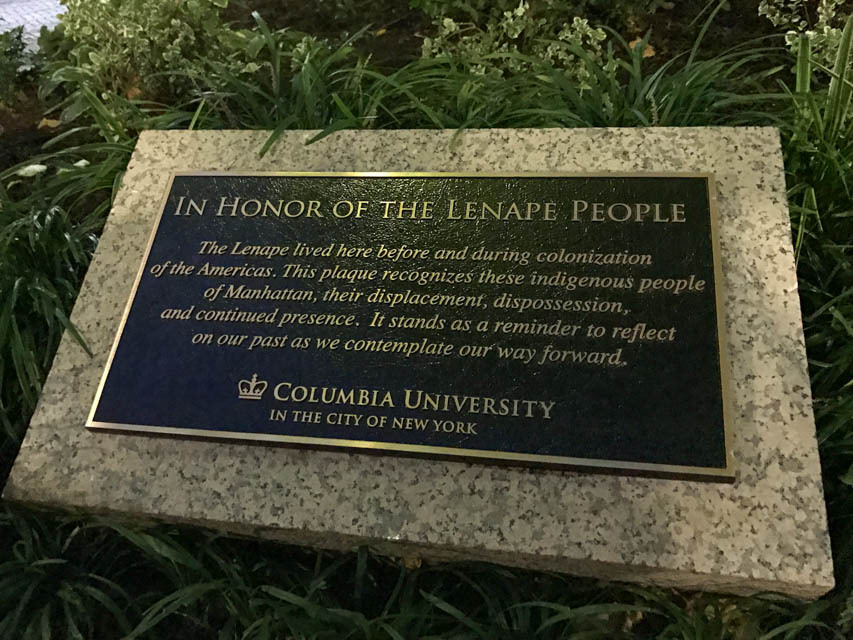 A plaque dedicated to the Lenape people was officially unveiled on Monday.

To honor those who occupied territory in Manhattan before the colonization of the Americas, the Native American Council, Office of University Life, and Office of Multicultural Affairs unveiled a plaque dedicated to the Lenape people in an Indigenous Peoples Day ceremony on Monday.

The plaque, placed in the courtyard in front of John Jay Hall and facing Wallach Hall, recognizes the Lenape, "their displacement, dispossession, and continued presence." Its installation comes after three years of advocacy and collaboration with administrators by NAC.

After a prayer of thanks, SilverCloud, an intertribal Native American singing group, opened the plaque dedication with a song that married traditional and contemporary elements of Native culture.

Throughout the evening, members of Columbia praised the historical and social significance of the event while acknowledging that the plaque represented a part of a much larger movement.

"This is a very proud moment for the institution," University President Lee Bollinger said. "This is something that will open windows on our past."

"As indigenous students, we represent some of the most forgotten people in the nation," NoiseCat said. "We are overrepresented in prisons and underrepresented in universities."

Co-president of the NAC Breanna Leslie-Skye, CC '17, expressed hope for a change in the status quo at Columbia.

"This plaque, sponsored and approved by the University, represents a willingness to recognize and validate the way traditional homelands and community are thought about by indigenous peoples," Leslie-Skye said. "This is our plea to continue supporting, and to do better in supporting all communities of color and marginalized voices on campus."

Though NoiseCat also said the evening was a victory for Columbia's Native American community, he expressed cautious optimism, pointing to the need for more indigenous faculty, admitted students, and courses that deal specifically with the art and literature of Native Americans.

"There is a lot of work yet to be done," NoiseCat said. "We need to do all that we can to integrate indigenous voices into the broader conversation."

At a reception held in the John Jay Hall lounge, Karl Jacoby, a professor of history, also advised students to appreciate the relevance of Columbia's history.

Associate Dean of Multicultural Affairs Melinda Aquino, also at the reception, emphasized the necessity of looking to the University's future.

"[The plaque is] really about thinking about the Columbia community as a whole," said Aquino. "Not only what it can be, but also what it should be."