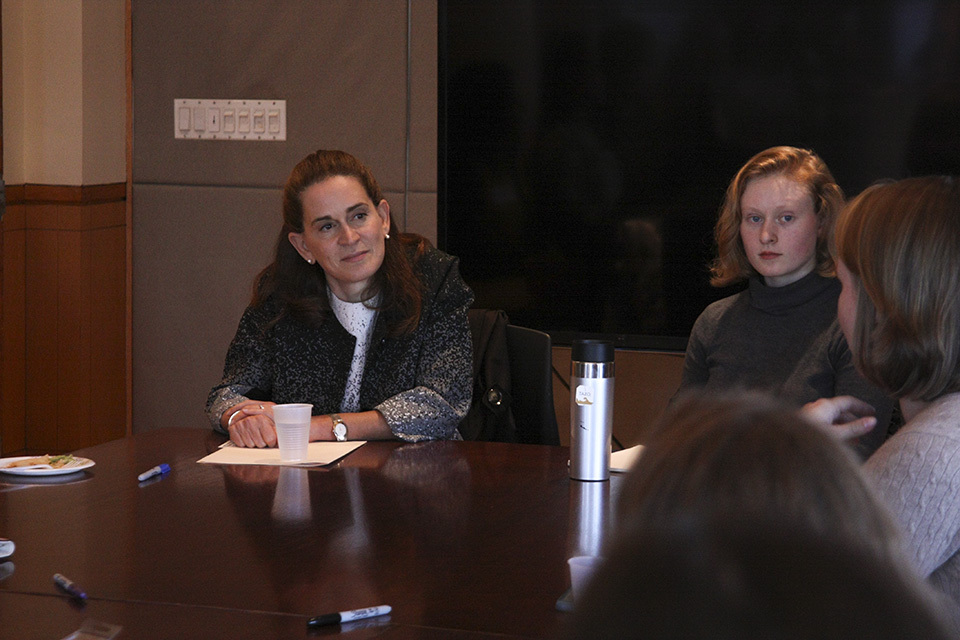 Barnard President Debora Spar discussed the role Hillary Clinton's gender has played in the upcoming presidential election and how the media has approached coverage of both Donald Trump and Clinton's campaigns at a fireside chat on Tuesday evening.

Spar, joined by a group of 16 students, spoke about how the current generation of young voters is not as accustomed to the kind of overt sexism she experienced growing up.

"When I was growing up, I kind of knew that [sexism existed] because those were the days when you want to look for a job in the paper and it's, you know, 'Women wanted' or 'Men wanted,'" Spar said. "I think your generation has an advantage because you've grown up not expecting sexism, which is wonderful, but it makes it so much harder when you get beat over the head with the ugly reality [of sexism]."

"I think this election has, sadly, brought out that ugly reality," she added.

Though Spar declined to share who she was voting for, she discussed the difficulty Clinton's campaign has faced when attempting to balance her identity as a woman with her position as a front-runner in the presidential election.

"Partisanship aside, it's depressing how big a role her gender has played," Spar said.

Rachel Miga, BC '19, commented on how Clinton's gender may make some women feel the need to further explain to others why they're voting for her.

"If you're not voting for her because she's a woman, it's more justified," Miga said.

Another student said she never viewed her gender as something that could inhibit her opportunities to be a leader until seeing how Clinton's identity as a woman had garnered negative attention from critics.

In response to a question posed by Spar about how students perceive political views in their home states compared to New York, Rachel Knowles, BC '18, said that she viewed Trump's lack of "political correctness" as translating negatively to voters in Alabama.

"They're uncomfortable with the idea of a woman being president, but they also hate Trump because he's so not 'family values,'" she said.

Referencing recently uncovered controversial audio recordings from 2005 that feature Trump speaking lewdly about women, Knowles said that the response from Alabama senator Jeff Session—who said that it was unclear whether grabbing a woman's genitals without consent was assault—demonstrated how different the political climate was in her home state.

Spar said that due to the "ugliness released" throughout the courses of Clinton and Trump's campaigns, she was uneasy about what may happen when the presidential race ends in just a few weeks.

"There's going to be some real concern about violence breaking out in this country," she said.

Spar said that regardless of whom students' preferred candidate was, it was crucial that they exercise their right to vote on Nov. 8.

"We need to all get out there and participate in this election," she said.