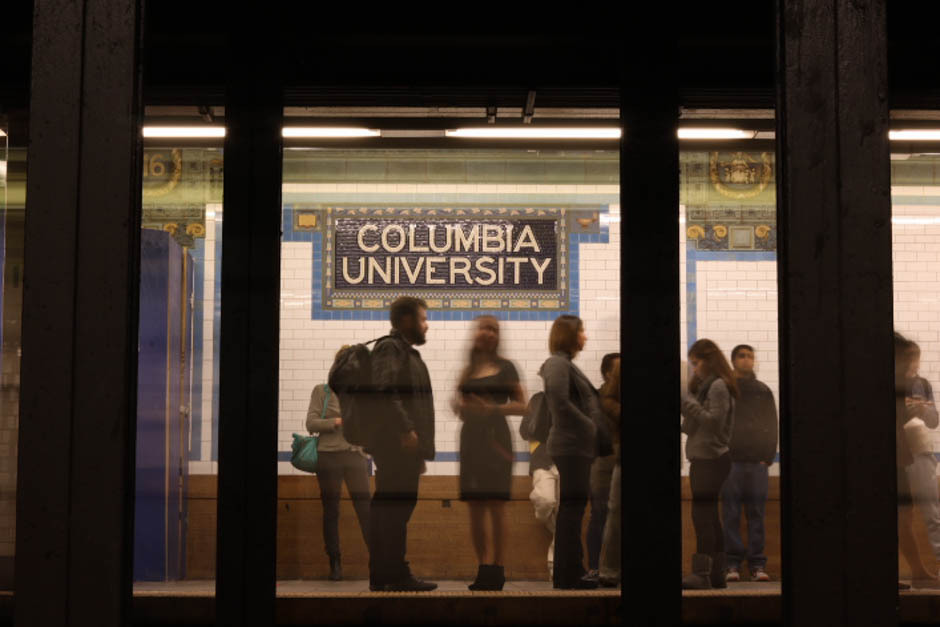 Students wait to take the subway at the 116th Street station outside Columbia's gates.

When Albert Zhang, CC '19, decided to attend Columbia, he was strongly influenced by the prospect of living in New York City.

However, Zhang, like many Columbia students, has found himself staying on campus.

Although part of the allure of coming to Columbia for many students is the opportunity to explore and take advantage of living in New York City, students often complain of being stuck in the "Morningside Bubble," citing high academic stress, complacency to stay on campus, and financial barriers.

"I feel like I have had a lot of activities that have prevented me from making full use of the city and exploring it," Zhang, who was preparing for an upcoming midterm, told Spectator on a Saturday night in Butler Library.

According to the University Senate's 2015 Quality of Life Survey, Columbia students report feeling "worried, tense, or anxious" for an average of 9.32 days a month, with many attributing the stress to academics. Columbia requires the largest number of classes for graduation and the second largest number of general education courses in the Ivy League.

Elena Burger, BC '18 and a Spectator columnist, said that though she makes an effort to leave the bubble at least once a week, she finds herself stuck on campus.

"A lot of what I like to do, like going to shows or going to concerts, are things that can be offered off campus," Burger said. "What keeps me here is usually just my workload."

"Everything is already here. ... I have the grocery store. My friends are all here. The bars are here," Genevieve Nemeth, BC '20, said. "If I am not trying, then I will stay around campus."

Other students, like Chelsea Wicklem, BC '17, said they felt pressure to make the most of their time at Columbia by staying on top of their grades and extracurriculars, which mostly requires staying on campus. The pressure is especially intense for those who are first-generation or low-income students, according to Wicklem, who is the executive director of internal affairs at First-Generation Low-Income Partnership National.

"There's a feeling of, 'I'm here. I spent the money to come to school here,'" Wicklem said. "I need to be doing something all of the time. I need to make the most of this experience."

Through her work with FLIP National, as well as her own experiences, Wicklem has found the cost of transportation to be a barrier to leaving campus, often for school-related events, jobs, and internships.

"Two dollars and 75 cents for a MetroCard swipe doesn't sound crazy, but there have been days where you have maybe six dollars left, and it is like, well, do I really spend it on one trip?" Wicklem said.

FLIP National provides microgrants to first generation and low income students to subsidize necessities, such as food, textbooks, and transportation. According to Wicklem, 16 percent of the first wave of microgrant requests were for transportation, and that number increased to 19.4 percent in the second wave.

"The requests that we got were almost entirely transportation to work, to volunteering—oftentimes it was school-mandated volunteering. There was school-required travel for classes, going to the doctor, and then interviews for potential jobs," Wicklem said.

Beyond the costs of transportation, time off campus can lead to a series of increasing costs, especially since access to the social and cultural activities for which New York is known can be unaffordable for some students.

"If I go elsewhere I have to pay for the train, but also I am going to need to buy food. Whereas if I stay on Columbia and Barnard's campus I can use the dining hall," Nemeth said.

In an effort to encourage students to explore the city, Columbia has instituted programs such as Urban New York, which sponsors three annual ticket lotteries, enabling 1,058 ticket holders in the 2015-16 academic year to attend cultural and sporting events throughout the city for free. Meanwhile, Passport to Museums provides Columbia undergraduate and graduate students with free access to over 30 museums. Core classes such as Music and Art Humanities also provide students with free or subsidized opportunities to go to museums or cultural events off campus.

Currently, Columbia FLIP and FLIP National are working to increase student access to the city by implementing a commuter benefits program, which would provide students with access to subsidized transportation.

FLIP hopes to model a commuter benefits program after a program at the City University of New York system that provides students with subsidized MetroCards. Though the program is currently only open to public universities, Columbia FLIP and FLIP National have been in contact with officials at Columbia and the Metropolitan Transportation Authority about starting a similar program at the University. The possibility of Columbia sponsored MetroCards has also been discussed by candidates for the undergraduate student councils.

"It is not just about being able to go to an internship—it is about what impact will that have on that student's performance here, [and] their success in life in general."