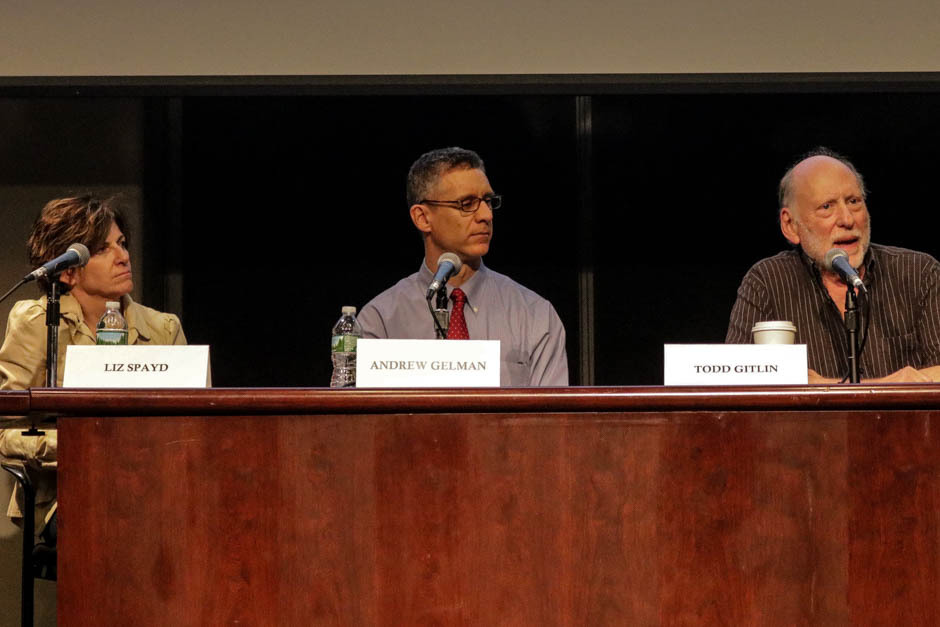 Students throughout the Columbia University community came together and watched—with a mixture of humor and disdain—the third and final presidential debate on Wednesday night.

Over 300 faculty and students came out to two separate watch parties hosted by the Tow Center for Digital Journalism and the Columbia University Democrats.

In a panel preceding the debate, speakers at the Tow Center touched on themes of media bias and the negative perception of political journalism.

The event featured Columbia professors Andrew Gelman, Todd Gitlin, Robert Shapiro, and Public Editor of the New York Times Liz Spayd. Gitlin, a journalism and sociology professor at Columbia University, posed a question as to whether journalists should act solely as unbiased reporters or filter political statements and only report the truth.

"I think Trump precipitated such surface crisis building up in journalism, and that crisis will continue. And I would categorize that crisis as, are we truth tellers or are we stenographers?" Gitlin said."The discussion that needs to take place now—and is happening in newsrooms—is,  What does it mean to be objective?'"

When asked about their thoughts on this election cycle after the debate concluded, students offered a variety of perspectives that were primarily underscored by disdain for one or both of the candidates and frustration toward the lack of policy focus during the debates.

"I think that it is definitely a pivotal election. I was a die-hard Bernie fan before, but I've come to respect Hillary a lot—I think that she is going to make a remarkable president," Sahana Narayanan, CC '20, said. "It is interesting how [the election] has galvanized a lot of support and interest in the political process for people our age."

Most students in attendance, however, were less optimistic about the current state of the election and American politics in general.

Joseph Villafane, CC '20, said that the polarization of American politics has had a notable effect on the election and the debates.

"It leads to exactly what you are seeing right now, which is where the two major political candidates are not only engaging in what is discord instead of discourse, but you have just deliberate disrespect on behalf of both sides," he said.

Another common point of criticism among students was the candidates' lack of focus on policy during the debates, and many shared the view that the event more resembled comedic entertainment than true political discourse.

"I think people value not as much what [the candidates] are saying, but how they say it," Catherine Clement, CC '20, said. "People like to watch the debates for the witty comebacks that Trump will say about Hillary, and people will laugh at it, but they are missing the substance of what [the candidate] was saying."

"I live in New York, so I know that the state is going to go blue, anyways, so I feel that I should vote with my heart [for] who I want to win," Craig said. "I don't expect Gary Johnson to come out on top or anything, but I don't think that I can morally vote for Hillary Clinton or Donald Trump."

Some students, however, questioned the virtue of casting a vote for a non-major party.

"I agree with a lot of what Jill Stein says and I like her as a person, but at this point in time, there is so much at stake, especially for people who are minorities or immigrants," Narayanan said. "I think that it's just selfish to vote third party."

Looking to the future, Clement said that the key to restoring balance to the American political system is to incorporate socially progressive ideals into both parties' platforms as a way to reconnect with the youth.

"I think that it's pretty fair to say that all of America's youth is pretty progressive socially, and if the Republicans want to keep up and keep winning the votes for younger people, they need to get over their aversions to things like abortions and gay marriage and focus on things they prioritize more heavily," Clement said. "If they don't, Democrats will win every time."