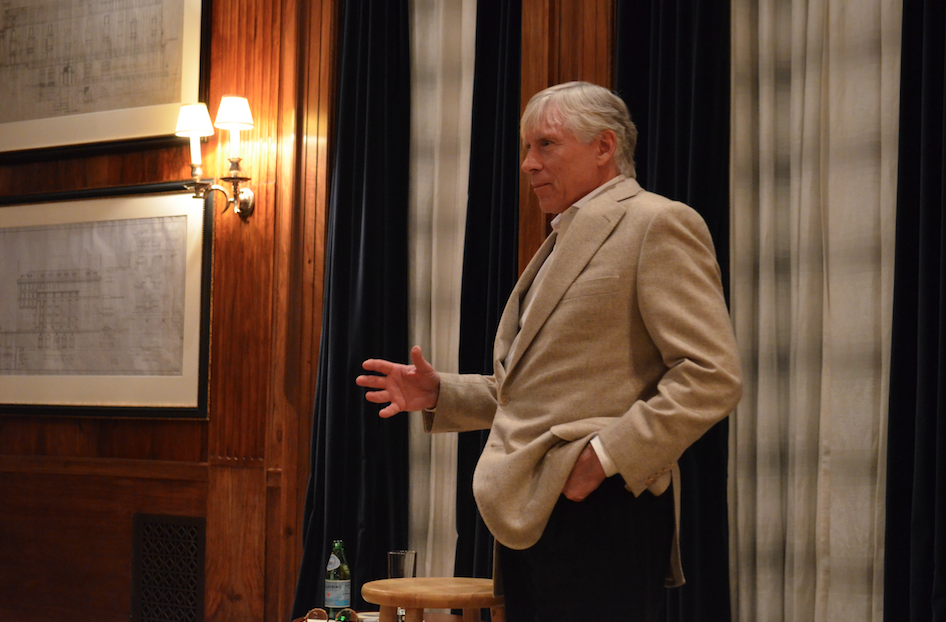 University President Lee Bollinger addressed graduate student unionization and the achievements of his fourteen-year tenure in the first graduate fireside chat of the semester.

University President Lee Bollinger addressed graduate student unionization and the achievements of his fourteen-year tenure in the first graduate fireside chat of the semester.

Much of the conversation focused on the new Manhattanville campus, which was dedicated earlier this week, as Bollinger discussed his major accomplishments and the challenges to come. He emphasized that the construction is "the biggest transformation in Columbia's spaces since 1896."

In response to a question about the achievements he is most proud of, Bollinger noted the expansion of both the University's space and endowment. He said that although Columbia has risen in rankings since the start of his tenure in 2002, the greatest barriers to his goal of high "academic distinction" have been limited space and money, and noted the disparity between Columbia's endowment to that of peer institutions like Harvard, Yale and Stanford.

"It's just a truism that universities in the United States grow about a million to two million square feet every decade," Bollinger said. "You need space, and even in the age of the internet, you still need laboratories and one-on-one kinds of things in classrooms."

According to Bollinger, the construction of the Jerome L. Greene Science Center and Lenfest Center for the Arts at Manhattanville will drive research and academic advances.

“All of this is about academic growth and development, so the key thing has been to try to build up everything, every department, every field, but also to understand where knowledge is going, and not to make bets on it but to invest in it, make sure that we're at the very top of what is happening,” Bollinger said. “Neuroscience, Mind Brain Behavior does that, precision medicine does that, data sciences does that.”
Bollinger also addressed the recent National Labor Relations Board decision giving graduate student teaching assistants and research assistants at private universities the right to unionize.
He defended the administration's decision to express a position on unionization, and said that the University has not yet decided whether to legally contest unions if they are formed.
“We think this is not good for the University and not good for the graduate students and other students and faculty,” Bollinger said. “We want to make the reason why we think that available to people. Now in my view, a rich open discussion about any serious issue is the right way to delve into it, and that's the only thing I hope for here.”
A graduate student in the Mailman School of Public Health said that he had not yet received his stipend and had difficulty communicating with the dean and others to address this issue. Bollinger said that the administration is working to address complaints about stipends not being paid and will release an announcement soon.
Bollinger elaborated on the administration's concerns about graduate student unionization, noting the potential consequences of a strike and raising doubts about whether stipends would actually be increased. He said that graduate students in unions may be forced to engage in strikes or sympathy strikes and are subject to the positions taken by the union if they participate.
Despite being against unionization, Bollinger affirmed the University's commitment to graduate students.
“We are interested in having that be a good relationship,” Bollinger said. “We also realize that it's not easy being a graduate student. I've lived that life. I know what that feels like, personally. And it can be hard at times.”
cara.maines@columbiaspectator.com | @ColumbiaSpec