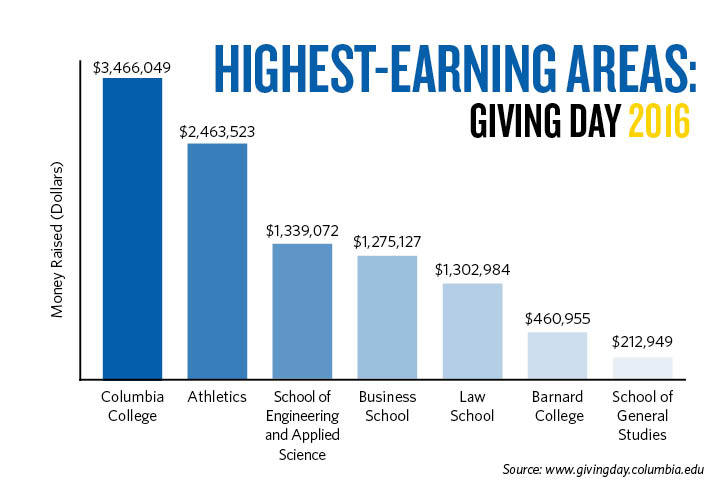 Surpassing the event's 2015 sum of nearly $13 million, alumni, parents, and current students donated 14,270 gifts to thirty schools, programs, and initiatives across the University beginning Wednesday. Columbia College, Columbia Athletics, and the School of Engineering and Applied Science received the most donations, with $3,466,049, $2,463,523, and $1,339,072 respectively.

In a new cause-based crowdfunding project, this year's event website also encouraged donors through the “Find Your Cause” program by providing new options for donors to take on global issues. Donors had the options of advancing Antarctic ice research through the climate response initiative, helping to prevent the Zika virus in pregnant women for health and wellness, and sponsoring Law School students interested in pro bono work through the social justice initiative.

For Christopher Riano, GS '07, the event allows the Columbia community to come together to focus on "finding ways to financially support the parts of the University that are the most dear to each of us," he said. Riano, a graduate of the School of General Studies and former co-chair of the GS Alumni Association, provided a Giving Day match for the School of General Studies.

"While I've definitely been someone who is very University-wide focused, I will always have a very strong attachment to my particular college because of the role that played in my life during my time here," Riano said.

Social media played a large role in Giving Day promotional efforts, with community members using the hashtag #ColumbiaGivingDay on Facebook and Twitter and a special geofilter on Snapchat to encourage others to donate.

Rachel Coker, Journalism '97, donated in memory of a faculty member who "made a big impression" on her during her time in the journalism school. She tweeted, "Proud to be a @columbiajourn alum. Gave today in memory of a great mentor. #ColumbiaGivingDay changes lives."

"It's nice to contribute and know that other people from lots of different classes, all over the world, are doing the same thing," Coker said.

The hashtag's presence on Twitter and Facebook also heavily featured posts from various Columbia athletic organizations, with Columbia Football receiving over $43,000 from 50 donors in the first 12 hours.

Track coach Dan Ireland spent the day contacting people, sending emails, and updating the Twitter account "just to get the word out," he said. Ireland encouraged his team of almost a 100 athletes to take to social media as well.

"It's a way for alumni to stay currently involved and help the program prosper," Ireland said. "The University has been very generous with our program, and our budget is great, but if we want to do out-of-region events and run the program on another level the way we want to, we need money to do that."