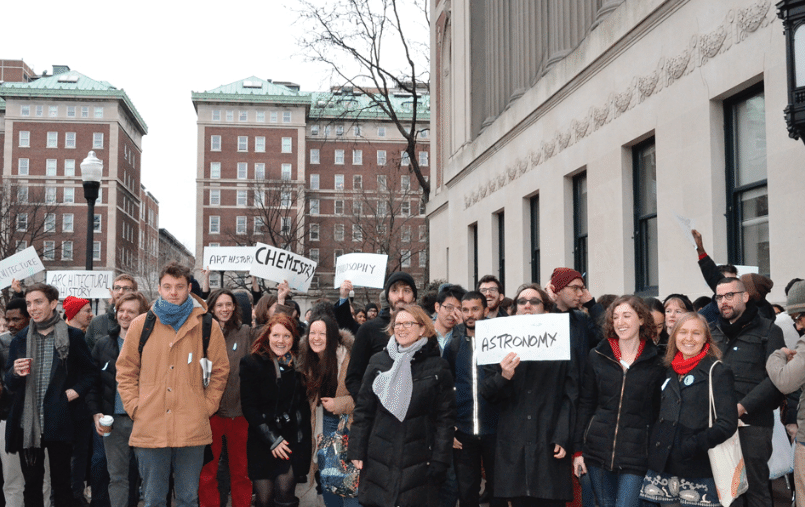 The National Labor Relations Board has scheduled Columbia's unionization election to take place on December 7 and 8.

Graduate and undergraduate teaching and research assistants will cast their ballots on Dec. 7 and 8 to determine whether they will unionize, the National Labor Relations Board has decided.

The announcement, emailed to students by Provost John Coatsworth on Monday night, comes after the Board's decision in August that ruled that graduate students at private universities have the right to vote, overturning a precedent set in a case involving Brown University in 2004. After the ruling, graduate students at universities nationwide mobilized to hold elections to unionize. Harvard University will be the first of Columbia's peers to vote, with an election scheduled for Nov. 16 and 17.

If a simple majority of students vote to unionize, they will be represented by Local 2110 of the United Auto Workers. That group of voters will include both graduate and undergraduate students—in August, the NLRB approved the bargaining unit that graduate students at Columbia had pushed for, making both undergraduate and graduate research and teaching assistants eligible to vote.

While Graduate Workers of Columbia, the group of graduate students advocating for unionization have continued to work to drum up support for the union, Columbia administrators, including University President Lee Bollinger, Dean of the Graduate School of Arts and Sciences Carlos Alonso, and Coatsworth, have signaled their opposition for unionization, arguing that it would change the relationship between student and faculty to one of employee and employer.

Columbia will set up four polling locations in total, including at Earl Hall on the Morningside campus and at the Alumni Auditorium Lobby at the Medical Center.

The National Labor Relations Board has scheduled a union election on the Columbia campuses to take place on the 7th and 8th of December. The majority of those voting will decide whether student research and teaching assistants will henceforth be represented by Local 2110 of the United Auto Workers.

The NLRB will set up and administer polling places on the Morningside, Medical Center, Lamont, and Nevis campuses. The locations and times for the balloting are as follows:

Notices will be posted on campus with a description of the job titles that are eligible to vote. Students are expected to vote at the polling place on the campus where they are appointed or have been appointed in the past. For more information on eligibility, click here. (The University will be sending out additional information in the coming days to those eligible to vote.) NLRB officials will have a list of the names of students on each campus who are eligible to vote. Students whose names are not on the NLRB list will be asked to fill out a "challenged ballot" that will be reviewed by the NLRB after the other balloting has concluded. The NLRB will commence counting ballots when the polls close and will announce the results as soon as they are available.

I urge all eligible student voters to inform themselves about the potential impact of unionization. The website https://unionization.provost.columbia.edu/ contains helpful information, including "frequently asked questions" on unionization, factual information on University policies (including stipends and benefits), and documents such as the text of the NLRB decision and the NYU contract with Local 2110. The union's website is www.columbiagradunion.org.

The unionization of student research and teaching assistants at Columbia would bring significant change to the University. We hope our academic community will consider this change thoughtfully and weigh its potential impact. Above all, we encourage all eligible voters to make sure to vote!