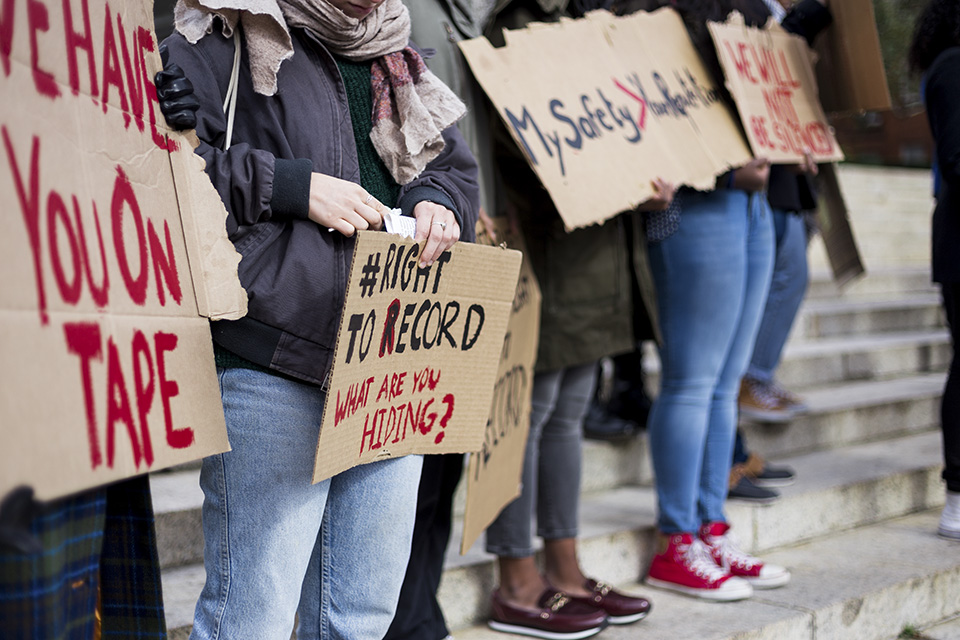 No Red Tape held its first rally of the semester on Low Steps on Friday and demanded that the University give students the right to record gender-based misconduct proceedings.

Continuing its criticism of Columbia's policy prohibiting students from recording gender-based misconduct proceedings, No Red Tape held its first rally of the semester on Low Steps on Friday and demanded that the University give students the right to record.

Last month, the activist group published an online petition arguing that the policy violates New York State's campus anti-sexual violence bill, Enough is Enough. That law states that universities must allow students access to a "full and fair" record of  investigation proceedings, though it does not specify a type of record that must be maintained. No Red Tape has contended that prohibiting recordings does not constitute a full or fair record.

Administrators have continued to defend the policy, arguing that the notes investigators take during the proceedings are sufficient, and have warned that most students feel uncomfortable with having their testimony recorded.

About 30 students attended the rally, during which survivors of sexual assault spoke about their experiences undergoing Columbia's gender-based misconduct investigations. Two survivors, elected to play recordings they had created of their interviews with the University's investigators, with one survivor admitting to recording the exchange despite the policy. According to Amelia Roskin-Frazee, CC '19, and one of the survivors, the recordings she took in violation of the University's policy are proof that investigators mishandled her case.

"This policy leaves students without an effective means of record-keeping to hold the University accountable for its practices and outcomes," activists chanted in unison.

Administrators have pushed back, arguing that the investigation model Columbia uses—ensuring that two investigators interview and take notes during proceedings and allowing students to review those notes and suggest changes—acts as a safeguard.

A series of student groups including Students for Justice in Palestine, International Socialist Organization, Columbia Queer Alliance, and Columbia Divest for Climate Justice, expressed their support for No Red Tape by sponsoring the event.

"The right to record is crucial, and we all know this because we just heard Donald Trump brag about grabbing women by the crotch. And we know this because someone recorded it. If it wasn't for that recording, Trump could grab crotches all the way to the White House," Brander Rasmussen said. "Like he said, you can get away with it. You can get away with it unless there is a recording."

No Red Tape Right to Record