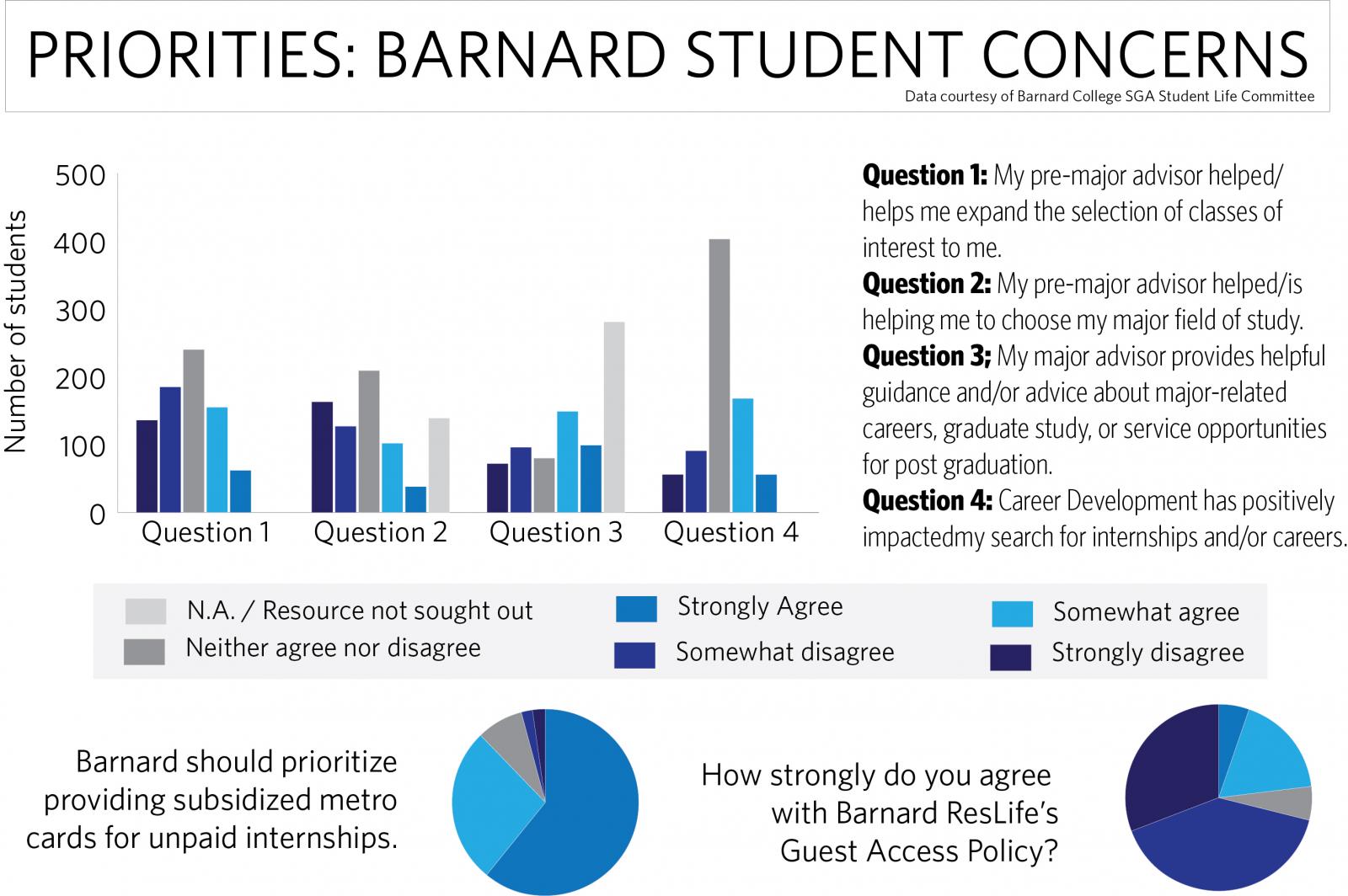 Barnard's Student Government Association released the results of its annual Desserts After Dark survey on Monday, and some of the most notable findings indicate that the majority of students disagree with Barnard's guest policy.

Desserts After Dark is an optional survey conducted by SGA's campus life committee every semester. The topics of the survey are determined by SGA and are used to gain information about student life on campus. In this fall's survey, 780 students responded.

Barnard's residential life policy states that a student must accompany their guests at all times, including when they sign out upon departure. The policy has faced criticism by some students for promoting the "walk of shame" when signing guests out of the dorms.

Out of 774 responses, over 71 percent of respondents disagreed with the policy.

Participants of the survey were also asked if Barnard's Career Development Office has positively impacted their search for careers and internships. With 774 out of the 780 participants responding to the question, the overwhelming majority said that they neither agreed nor disagreed with this statement.

At an SGA meeting on Monday, SGA Vice President of Campus Life Angela Beam, BC '18, said that she believed this neutrality toward the Career Development Office was "problematic" because students should feel satisfied with how the office is helping them find internships and jobs after graduation.

Another question on the survey looked to see how students were being influenced academically by their pre-major and major advisers. Barnard's pre-major advising system is unique in that students are assigned members of the faculty or administration to serve as their advisers before they officially declare.

But when asked if their pre-major advisers helped them expand the selection of their classes of interest or helped them choose their majors, the majority of respondents said that they neither agreed nor disagreed.

The survey also asked students to write in what they understood the college's "Being Barnard" program to be in two sentences—a question which Beam said was inspired by Spectator's coverage of the education and awareness campaign, which is largely unknown by students, non-mandatory, and has remained sparse in sexual violence prevention programming.

Only eight percent of respondents answered correctly with one or more of the five tenets—wellness, relationships, intervention, social identities and social power, and violence education—of Being Barnard.

Eighty-eight percent of students also said they strongly agreed with the idea that Barnard should subsidize MetroCards for unpaid internships. Despite this, Beam said SGA itself does not have the funds to support this and that the question was posed in order to gauge student interest.

Still, SGA members said that other topics addressed in the survey, such as the guest policy, could be addressed by the council.

"I think it's really important to act on these things, you know, to be held accountable to the student body and the things that they're prioritizing," Beam said.