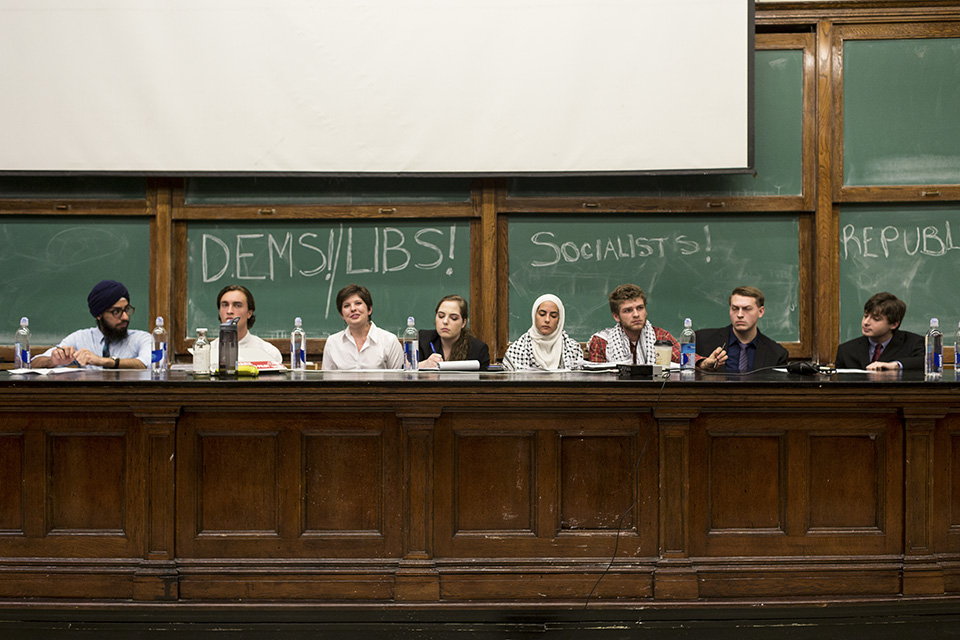 The current presidential election has left student political groups on campus grappling with how to approach the race.

When the Columbia University College Republicans spoke at the campus's first multi-party political debate on Tuesday night, hosted by the Columbia Political Union, they were met with mostly silence and occasional boos and jeers by the 50 students in attendance. Meanwhile, the Barnard Columbia Socialists and Columbia University Democrats received loud applause and approval from the audience.

The response of the attendees is emblematic of the political climate that has emerged on the traditionally liberal campus over the course of the current presidential election—one that has led to a rise in participation and activism for CU Dems, and by contrast, has led CUCR to adopt a more subdued strategy.

Attempting to leverage a surge of enthusiasm on campus around the election, CU Dems have sent over half a dozen campaigning trips to Pennsylvania, and have also organized numerous activities including speaker and panel events. CU Dems have endorsed and campaigned for the candidacy of Secretary Hillary Clinton throughout the election season.

Shoshana Lauter, BC '18, the president of CU Dems, said the group has seen an influx in applications for their annual campaign trip to Lancaster, Pennsylvania over fall break. In previous years, they have typically received around 90 applications for these trips, but this semester they received around 120, making this trip their most popular by far.

"We had more applications than ever before because people know the stakes more," Lauter said.

Lauter attributed the rise in applications to a growing sense of urgency surrounding the need for activism. On this trip participants will be working on a "get out the vote" campaign to impact voter turnouts in specific communities and houses that they know to be Democratic. They will be canvassing for three candidates: Christina Hartman for U.S. Congress, Katie McGinty for the Senate, and Hillary Clinton for the White House.

Meanwhile, CUCR has taken an entirely different tack, declining to endorse any presidential candidate. In previous years, they have endorsed candidates, most recently Mitt Romney in 2012.

CUCR's refusal to endorse a candidate stems from the personal beliefs of the board, according to Andy Truelove, CC '17, president emeritus and current board member of CUCR.

"Not everyone on the [CUCR] board was gung ho about Donald Trump, so we didn't want to essentially alienate people," Truelove said. "We didn't want to say this is our official stance, that we were going to support the GOP candidate, because many people on the board, including myself, do not support Donald Trump."

Instead, CUCR board members are committing themselves solely to the basic responsibilities of the party.

"Our strategy is essentially to provide resources to anyone with conservative ideas, and that includes if they want to work for the Trump campaign," Truelove said.

By limiting its role to providing resources to conservatives, rather than endorsement and campaigning, CUCR is in a position to support both Trump supporters and non-Trump supporters alike, without the feared condemnation of endorsing a polarizing candidate.

However, at the same time, CUCR has also looked to bring controversial conservative speakers, including Milo Yiannopoulos, a journalist and editor for Breitbart News, to speak on campus to promote diverse opinions and ideas.

"Ninety to 95 percent of what Milo says, I do not agree with," Truelove said. "But part of it is bringing a viewpoint that you don't really hear on this campus."

But the Yiannopoulos event has been met with calls to revoke his invitation and accusations that the event is "shameful," according to a Facebook post on the event page. This, according to Truelove, is a reflection of the one-sidedness of opinion and views on campus.

"Particularly when you look at social media on campus and people who are on it, because the campus is so left-sided, when you go on your Facebook feed that's pretty much all you see," Truelove said. "You can have your opinion that this person shouldn't be allowed to speak, but I think that's a very, very dangerous idea."

Not all conservatives have followed CUCR's approach. Columbia students who support Donald Trump may be feeling the effects of the candidate's controversial image, according to Dante Mazza, CC '19 and a supporter of Mr. Trump's candidacy.

"It's not something I run around telling people, for sure," Mazza said of his support for the GOP candidate. "I just fear harassment and I think there's a lot of Trump supporters on campus who wouldn't even want to do this interview and definitely would never express their support in public, in person, because they're afraid of repercussion."

Fears of repercussion and censorship are recognized by Truelove as well, and according to him they are experienced by conservatives on campus in general.

"I think that people feel as though when we do speak, we oftentimes are dismissed, in the sense that it seems that here on campus there's left, and there's further left," Truelove said. "For a lot of people, they're not quite as willing to [express their views] because they feel like they'll be ostracized for it."

"There's oftentimes a visceral reaction, particularly for people that are in [CUCR] and do support the nominee," Truelove said.

Disregard and hostility toward Trump's supporters may have more unfair and negative consequences for conservatism on campus in general, according to Mazza.

"Would I ever, ever wear my Trump shirt or Make America Great Again hat around on campus and outside of my building where I live? The answer is absolutely not," Mazza said. "Obviously, I don't think a conservative opinion will ever be the majority opinion on this campus, but I believe it could be a little bit more accepted and at least talked about more than perhaps it currently is."