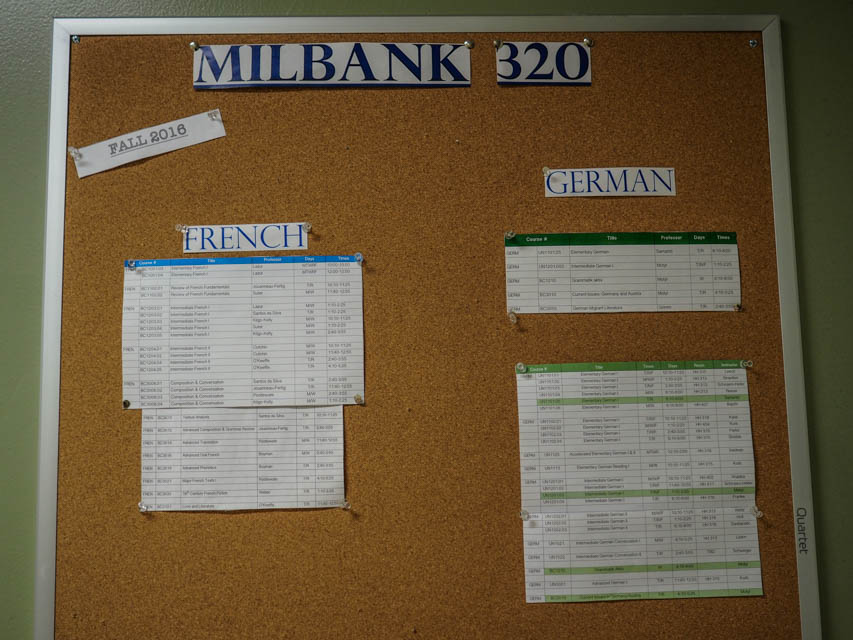 Students looking to register for Barnard's French language courses previously had to sign-up on the bulletin board outside of the department office.

Students looking to sign up for language classes offered by Barnard's French department next spring will no longer have to do so manually on a bulletin board outside the department office; instead, they will be able to do so through an online form.

The previous sign-up process required students to add their names to a sheet posted outside the French department office during the preregistration period for courses offered in the following semester. While students still had to formally add their desired courses to their online Student Planning schedules, the in-person sign-up gave priority seating in small French classes to roughly the first 18 students on the list.

Sondra Phifer, a department assistant for the French, German, Italian, and comparative literature departments, said the French department has always used this double sign-up system to estimate enrollment and gauge whether additional sections need to be offered at popular times.

"The time that goes into that, the money we have to request to hire someone from the provost—it's a long process," Phifer said. "If we know this ahead of time, we're able to be ready for the semester."

But Phifer—who spearheaded the change to the online form—said the manual sign-up was inconvenient and inaccessible to students studying abroad.

"It's just outdated, messy—I can't read people's handwriting," Phifer said. "We're in the 21st century and I said to them [the department] even last semester, Why don't we try doing a web form?'"

By moving the system online, the department will be able to see accurate timestamps from when students sign up, allowing it to give priority to those who submit the form first, replicating the first come, first serve model of the bulletin board sign up system.

Margeaux Biché, BC '18, who is looking to take intermediate French II next semester, said that while she did not mind the previous system because it allowed her to see who else signed up for the class she wanted to enroll in, she was looking forward to trying out the new system.

"Hopefully the online version makes things simpler and is suitable for the French department," she said.

Phifer said she hopes the new system will make French language classes more accessible to students who may have previously been deterred by the cumbersome sign-up system.

"We don't want to deter any student from taking our classes," she said. "We want them to feel welcome."