After Trump victory, some professors move to postpone midterms

After Trump victory, some professors move to postpone midterms 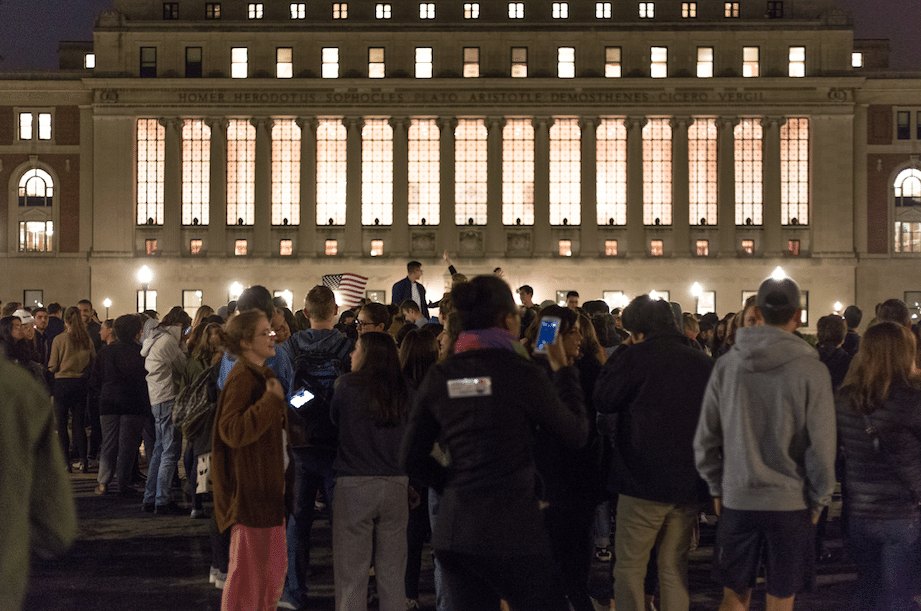 Most classes were held as usual following Republican nominee Donald Trump's shocking presidential victory on Wednesday morning, but some professors postponed midterms, cancelled class, or disregarded lesson plans and held discussions about the unexpected upset instead.

As of Wednesday night, at least a dozen midterm examinations had been rescheduled, with professors either preemptively sending emails to students notifying them that midterms would be postponed or agreeing to postpone exams following student requests and pressure from several student councils.

Student councils and student petitions advocated class cancellations in addition to midterm extensions, but over a dozen students interviewed were divided on whether holding classes on Wednesday was the right decision. Many said that it was helpful to discuss the situation with professors and peers, but that lectures and seminars that continued as planned were often filled with distracted students and professors—some whom reportedly were seen crying during class—who had not slept at all the night before.

Political science professor Justin Phillips, who discussed the election briefly at the beginning of his class, said that students in his Sexuality and Citizenship in the U.S. seminar seemed "devastated."

"Students looked a bit shaken, not really focused on what we were doing in class," Phillips said. "You can tell when someone's upset. They just look kind of unhappy and distant People looked tired; it looked like some people had probably been crying. I think it was very palpable in the room."

Engineering Student Council mobilized after the election and asked that faculty in the School of Engineering and Applied Science push back midterms and homework deadlines to early next week.

ESC President Neha Jain, SEAS '17, said that she floated the idea of asking for SEAS-wide extensions on assignments to other members of the ESC executive board, who agreed that exams should be postponed "given that the elections results have left people feeling triggered, anxious, and unwell."

Jain emailed SEAS Vice Dean of Undergraduate Programs Barclay Morrison asking for his assistance. As of publication, Morrison had not yet responded.
ESC also posted two messages on Facebook, the first encouraging students to “practice self care,” and the second telling students to email the council with course, professor, and assignment details if students were not granted an extension that they had requested.

"We will help advocate for you within the advising office, which will also be looping in [SEAS Dean Mary Boyce] and Dean Morrison on these cases," the post read.

Barnard students had also begun circulating a "No class petition for Nov. 9" on social media early Wednesday morning, prompting the Barnard Student Government Association to unanimously agree to email Dean of the College Avis Hinkson, asking that midterm and assignment extensions be considered.

“There was a lot of distress and a lot of anxiety that was coming through Facebook, personal accounts, live updates from students as they're watching this at midnight, 1 a.m., and the hours keep pushing,” SGA President Sara Heiny, BC '17, said.
Although the petition received over 500 signatures within the first hour of its creation, Barnard President Debora Spar and Hinkson notified students in an email late Wednesday morning that they would not be instituting a college-wide class cancellation. Individual cancellations and postponements, however, could be made at the discretion of faculty members.
Columbia College Student Council followed suit late Wednesday morning and asked administrators to assist in granting extensions and postponements. CCSC also posted a message on Facebook, acknowledging that the recent days have been “troubling for many in our community.”
While General Studies Student Council has not asked administration to push for extensions, GSSC President Julian LaRosa, GS '19, said that the council is encouraging students to contact advisers and professors for individual accommodations.
Math professor Héctor Chang-Lara postponed the midterm for his Ordinary Differential Equations class following requests from Chloé Suridis, SEAS '19, and others enrolled in the course.
“I was not prepared for the outcome of this election,” Suridis, who posted in the Columbia Class of 2019 Facebook group to encourage others to contact Chang-Lara, said. “Instead of studying for my exam, I was glued to the election update. It's not fair to have a test the following day when something so monumental is taking place, especially when this event is threatening so many groups of people in our country.”
Other SEAS midterms and some midterms in Columbia College and School of General Studies courses, including African Civilization, have also been cancelled or postponed.
“I know a lot of you guys are emotionally exhausted after tonight—I am, too,” computer science professor Jessica Ouyang wrote in an email to students. “Let's take the weekend to get ourselves back to normal.”
While midterm season at peer institutions had ended in previous weeks for the most part, faculty at Harvard and Yale also offered students extensions and postponements.
A Yale professor's email to his students, informing them that their exams were now optional, has been widely reported. The unnamed economics professor wrote that he was making the exam optional after receiving many heartfelt notes from students, including some “who fear, rightly or wrongly, for their own families.”
But, for many students at Columbia who did have regularly scheduled class on Wednesday and had stayed up the entire night watching the election, their peers and professors seemed too distracted by the results to make for a productive class.
“It was a waste of time. [My professor] was out of it, we were out of it; it would have been better if she had done what my UWriting teacher did, just let us talk about it, or just cancel class,” Kyle Creech, CC '20, said of his Italian class.
Romy Felsen-Parson, CC '20 and a member of Spectator's copy staff, said that she would have preferred for her classes to be cancelled as well because most students were not concentrating on the instruction.
“I think they were also just really distracted and distraught by the results,” Felsen-Parson said. “I think that it's taking a bit of an emotional toll on everyone right now.”

However, in classes that discussed the election, students and faculty were able to voice their concerns and predictions about a Trump presidency in an academic setting.

"I thought it was actually quite a touching conversation," Sam Cordner, CC '19, said of the conversation in his Contemporary Civilization class, during which the students spent a majority of the time discussing the election. "I'm from a particularly un-diverse and underexposed environment, and people's reactions today was the first time I think I've really appreciated what this means for people, certain groups of people in particular."

Political science professor Brigitte Nacos said she held her Media in American Politics seminar because she believed it was important for students to come together and discuss the election, as it is closely related to the course's subject matter.

"I very much encourage that all kinds of views are being discussed, as long as it is a civilized discussion," Nacos said. "And that should be very different from what we have seen in this campaign."