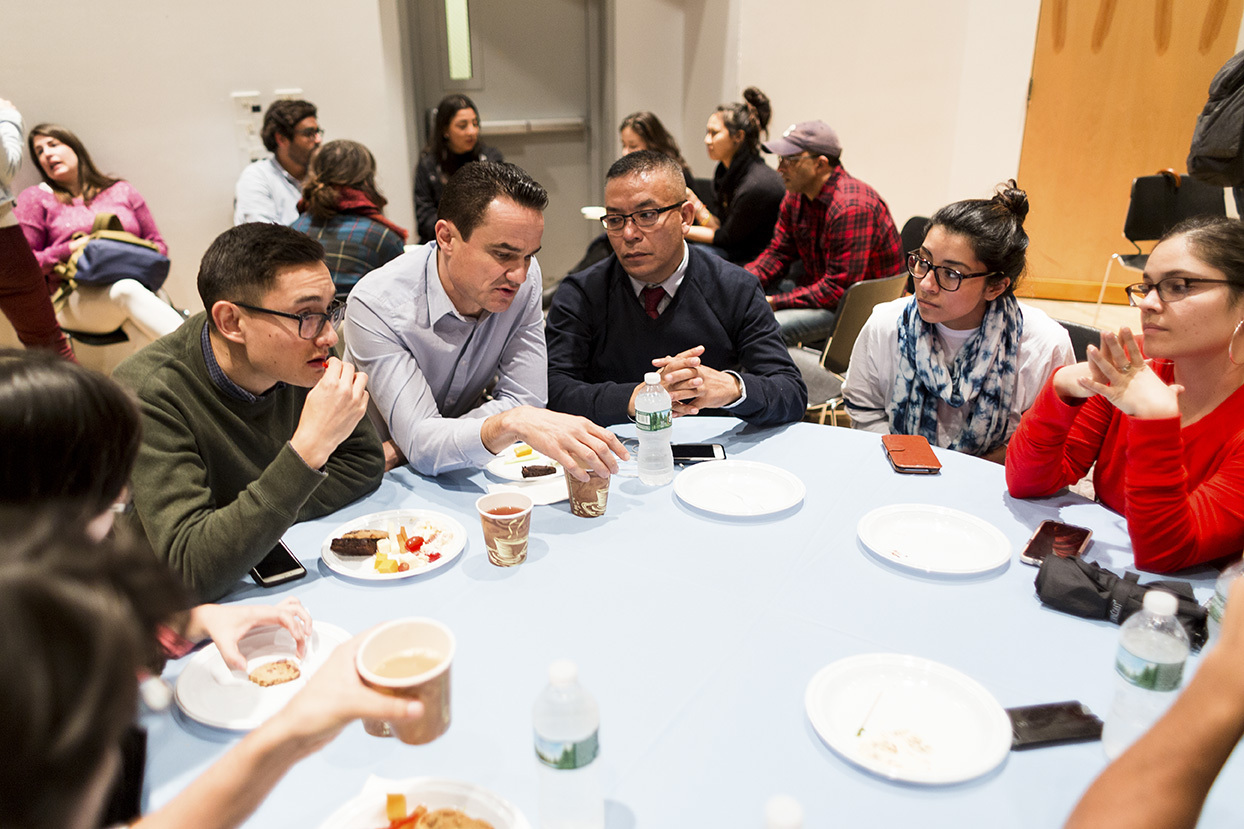 Speaking in somber tones and reiterating their confusion and disbelief, students reflected on Donald Trump's general election victory at town hall discussions across campus on Wednesday.

"People came in with a wide array of feelings, and with that, it's important for everyone to be together, to listen and learn," Executive Vice President of University Life Suzanne Goldberg said. "My hope is that everyone will carry this sense of community outwards in the days and months to come."

At both events, students expressed shock that Trump earned over 270 electoral college votes to claim the presidency despite trailing in the polls for the majority of the election. Others, citing Trump's rhetoric against Latinos, African Americans, women, and immigrants, said they felt personally threatened by his victory.

The University-organized discussions come after a show of raw emotion on College Walk Tuesday night, when over 200 students gathered to scream and chant in protest of Trump's election. Dean of Undergraduate Student Life Cristen Kromm said the importance of hosting calmer discussions was underscored after she witnessed the protest on Tuesday.

"This particular election has been so incredibly divisive. This [event] can start the conversation between communities, whether it's people who are angry or upset," Kromm said. "We need to start figuring out how to bring viewpoints together in a more respectful, civil way."

At the Lerner event, which was attended by over 100 undergraduate and graduate students, discussion quickly turned to the ramifications the election would have on those in attendance. Many students expressed worries on behalf of their peers.

"I'm concerned about a lot of the students here, DACA [Deferred Action for Childhood Arrivals program] students," June Deng, CC '17, said, speaking of the executive order issued by President Barack Obama that granted reprieve from deportation to immigrants who arrived in the U.S. as children. "Trump said that the moment he assumes the presidency, he's going to repeal DACA … I am an immigrant. Soon I want to be naturalized. And I'm not sure what effects this election will have."

Grace Sandoval, GS '18, said that as a New Yorker and a person of color, she worries Trump's history of support for reinstituting stop-and-frisk policies could result in future policing methods that target her.

"He's pro-stop-and-frisk, which scares me. I know it was ruled unconstitutional, but I don't want to doubt anything he's capable of," Sandoval said.

Many students acknowledged that their surprise at Trump's victory resulted, in part, from the overwhelming liberal presence on Columbia's campus. Others added that they knew some Republican students but were unlikely to discuss the election with them.

"I saw one of my friends in Ferris who I know is a Republican, and I couldn't even go talk to him because I was scared to ask whether he voted for Trump," Christine Nelson, CC '17, said. "I still think of them as my friends, but if I know they voted for Trump, I'd just feel betrayed."

Having the opportunity to vent anxiety and hear about fellow peers' reactions was a prominent draw of the town hall event.

"I felt scared and sad at the results, and I was completely shocked. It's nice to hear other people's thoughts," Laura Bilger, SSW '17, said. "I've kept it all to myself most of the time, but I'm getting it all out."

Meanwhile, in the Event Oval of the Diana Center, a panel of political science faculty explained the results of the election to a group of over 400 students and faculty.

Miller said that one of the pervasive narratives in media for the past six months had been the oversimplified characterization of Trump supporters, who in actuality spanned a wide range of socioeconomic classes.

"I think most of the simplistic explanations that have been used in that realm are probably wrong," Miller said. "They rely on anecdote and assumption. One example of that has been the depiction of the fading socioeconomic status."

Miller said that instead, he found two main traits in common among Trump supporters: party identity and racial resentment.

"A good example would be, think of a place where folks feel things aren't the way they used to be and they can quite easily point the finger at someone else on the basis of race," Miller said. "There are counties and towns like that."

"This is looking like an identity election to the point that we have not seen recently," Miller said. "I think that is one of the reasons it feels so urgent to so many people."

Despite the detailed analyses of how Trump was elected, Miller said that ultimately, the outcome of the election and what it would mean for the future of American politics was still uncertain.