Anti-Trump protests continue over the weekend, more expected during the week

Anti-Trump protests continue over the weekend, more expected during the week 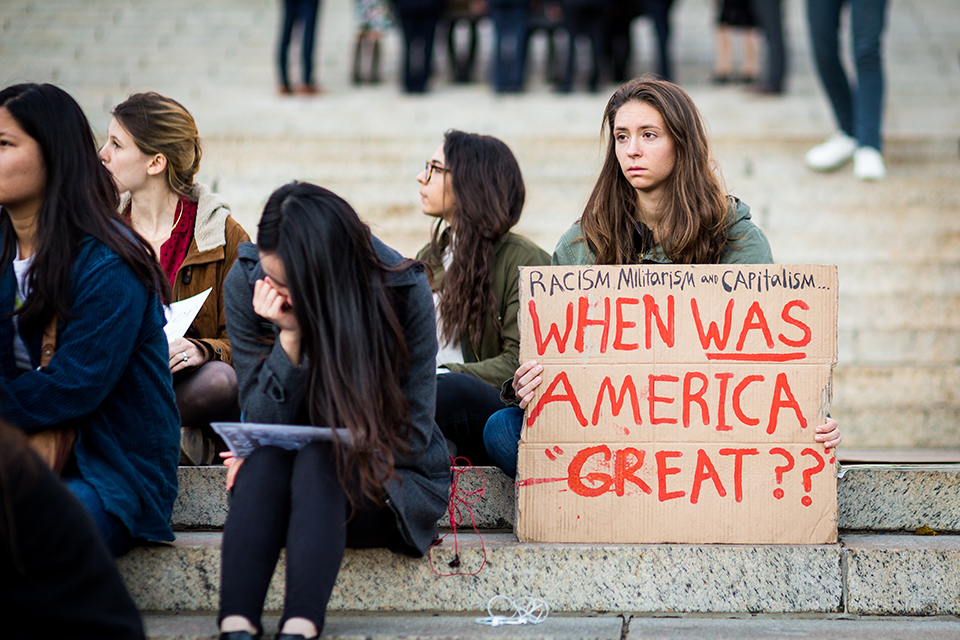 While the dominant emotion at a protest directly following the election last Tuesday night was one of shock, the protests over the weekend struck a more somber mood as students began to come to terms with the results.

About 60 students gathered on Low Steps on Friday afternoon at an event organized by the Columbia University Democrats. The students sat together on the Steps and held signs bearing phrases like "Stronger together" and "Love is love." They played music,sang, and spoke about the grief and fear they were experiencing.

"I accept Trump as the president because I believe in democracy. I'm not terribly optimistic, but I hope for the sake of freedom, love, and compassion that he does whatever he can to bridge this country's divisiveness," Nikita Singareddy, CC '17 and a Spectator columnist, said. "However, I do not accept the passions ignited by his campaign. I will keep fighting them, and I reject any and all excuses and capitulations."

One onlooker observed the protest and began to cry.

"They're not really protesting. They're showing love and support for each other," another observer said to their friend.

Earlier that day, another group of students gathered on the Sundial to show support for people of color on campus and to protest against racism and Trump's presidency.

On Thursday, a single School of General Studies student stood on Dodge Hall with a sign that read "Not My President" and shouted in protest.

Protests are expected to continue in the coming week, with a walkout scheduled on Wednesday and students slated to protest on Low Steps every day this week.