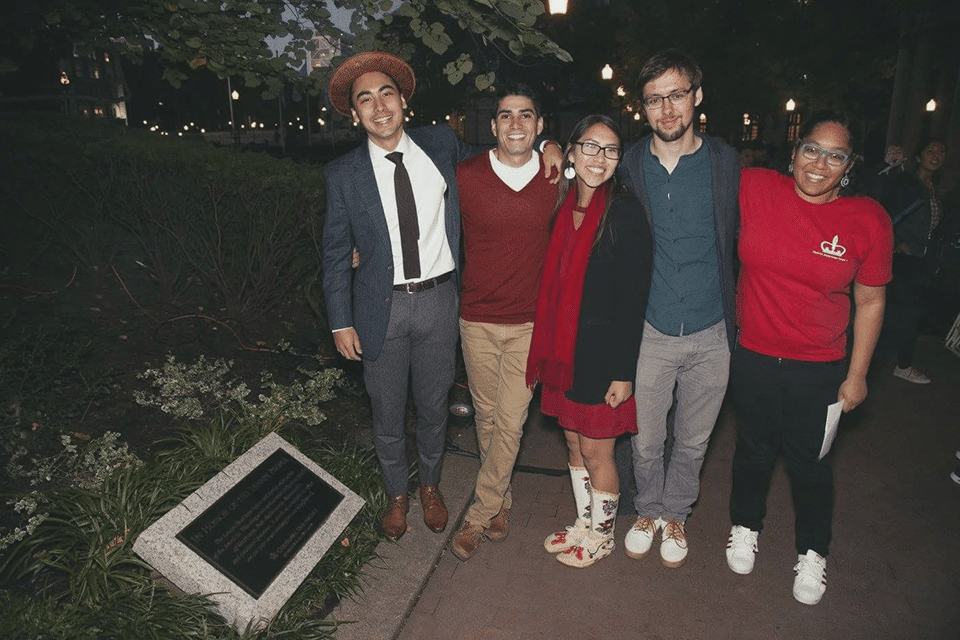 After a plaque acknowledging the Lenape people was installed last month, NAC penned a proposal for further reparations.

Building on demands for Columbia to acknowledge its involvement in the colonization of the Americas and the displacement of indigenous peoples, the Native American Council of Columbia University submitted a document proposing reparations from the University.

The proposal follows a success for Columbia's Native American community in October, when a plaque honoring the Lenape people was installed outside of John Jay Hall. In the document, NAC calls for changes in financial allocations, admissions policies, and the names of buildings on campus.

The proposal also includes a timeline that indicates when NAC would like to see each change addressed, with the majority of changes expected by the fall of 2017. It also asks for a formal response from the University before the coming spring semester.

"It was something we'd pushed for a long time," Tristan Stidham, CC '17 and the co-political chair of NAC, said. "So we're trying to keep our momentum going."

According to Stidham's co-political chair Noah Ramage, CC '17, NAC hopes to set up meetings with administrators from offices including Campus Services, the Office of University Life, and the Office of Multicultural Affairs to discuss their proposal.

The proposal, which also cites the role of notable Columbia benefactors like Marcellus Hartley Dodge in frontier violence, aims to improve the University's resources for indigenous students. One change that NAC has considered is the renaming of certain buildings.

"It wouldn't be too much to ask to change the name of a building [named after someone] that sold guns to frontiersmen," Ramage said. "Or to generals that fought against Native people in the frontier."

Ramage pointed specifically to buildings like Hartley Hall and Earl Hall, both named after members of the Dodge family. Marcellus Hartley Dodge Sr. served as the chairman of the board of Remington Arms, a company that manufactured weapons used in frontier expansion.

Renaming buildings requires approval from the University's board of trustees. The trustees took several months to approve the installation of a plaque acknowledging the Lenape people earlier this year.

Additionally, NAC has taken issue with the placement of statues of men like Alexander Hamilton and Thomas Jefferson, historical figures who supported the displacement of Native Americans.

"Symbolically, it would carry a lot of weight for the University to start addressing its past in that way," Ramage said.

NAC also hopes to institute certain admissions policies, pushing for a scholarship for the Lenape people and the establishment of a fly-in program for indigenous students interested in applying to Columbia.

Ramage and Stidham also cited a hope for the establishment of a Native Studies department and a University policy discouraging the cartoon images of Native Americans found on the logos of certain sports teams.

"These [long-term goals] are options I want to see started in the near future, hopefully while we're still here," Ramage said. "But they won't be completed until long after we're gone."

Ultimately, NAC hopes to make extensive adjustments to a status quo that is affecting an increasing number of students, as NAC members have seen their community expand considerably throughout their time at Columbia.

"In the past few years, the Native community at Columbia has been growing. But there have never been the resources in place to help sustain that growth," Ramage said. "What would come out of this proposal is a complete transformation of what Columbia is for indigenous life here."