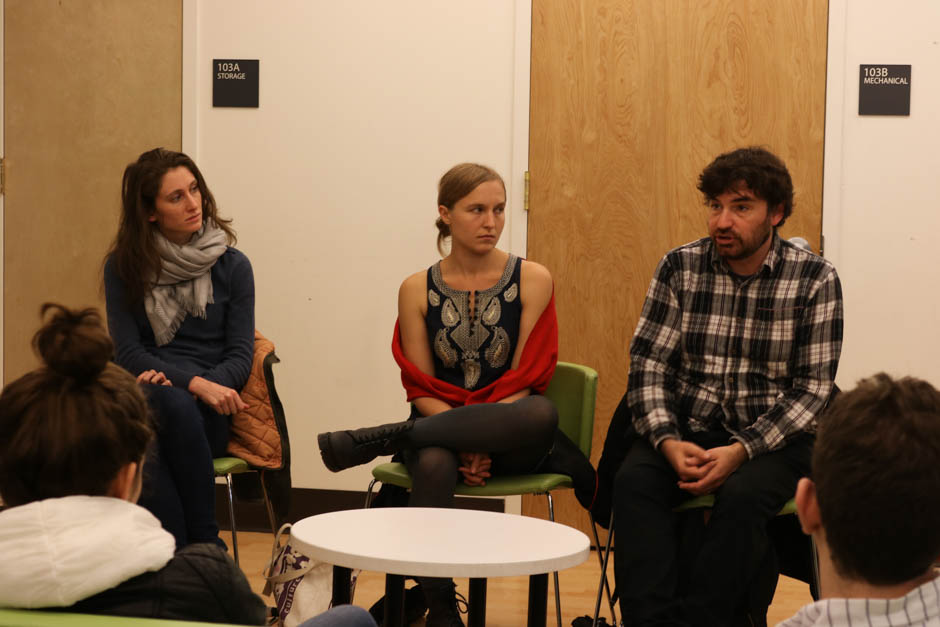 Panelists speak on the impact of the undergraduate teaching assistant community's vote on the issue of graduate student unionization.

Graduate and undergraduate teaching and research assistants at Columbia will vote on whether or not to unionize next week, ending a two-year campaign that brought the issue of unionization to the forefront of private universities across the country.

In the months leading up to the vote, students and administrators have honed in on issues relating to payment, working conditions, and the role TAs and RAs play at the University.

Graduate and undergraduate students who work as teaching fellows, TAs, RAs, and graders will vote on whether or not to join the United Auto Workers Union on Dec. 7 and 8. In August, the National Labor Relations Board ruled that graduate students at private universities have the right to unionize, overturning a 2004 ruling that prohibited them from unionizing.

Unionization would redefine the role of TAs and RAs within the University, require students to pay additional union fees, and give graduate students more leverage in negotiations. It would also likely institute a grievance procedure for students to resolve disputes with the University.

At this point, it is unclear what specific, tangible effects unionization would have on the University. There are no guarantees that the potential union and the University would be able to agree on a contract following the vote, and uncertainties remain as to what benefits students might receive.

The GWC argues that a union is necessary to help students resolve serious issues—including healthcare and late pay—within the workplace that are currently going unaddressed. Administrators have pushed back, arguing that a union would interfere with the primary role of TAs and RAs as students and that measures are already taken to address students' concerns.

However, both sides agree on one important fact: if a majority of RAs and TAs vote to unionize, they will all be required to pay dues—two percent of their stipend—and be represented by the union, regardless of whether or not they voted in favor of it. Administrators and anti-union students have expressed concern that a collective bargaining unit will not be able to address the diverse needs of students across all schools in the University.

The NLRB ruling redefined the role of graduate students who work for the University as employees rather than just students. For administrators, this reclassification blurs the line between the work graduate students do and their education. Typically, research and teaching are essential components of a graduate-level education.

"When you start considering yourself an employee, you are automatically and by definition creating this other thing called the employer," Graduate School of the Arts and Sciences Dean Carlos Alonso said. "You are essentially creating this new category, which comes with prerogatives."

GWC members do not object to the designation as employees because they say that as TAs and researchers, they already perform the work of employees and deserve the rights of employees.

Senior Vice Dean of Engineering Soulaymane Kachani noted that although it is less expensive for the University to hire adjunct professors than graduate students as instructors and researchers, they hire graduate students to provide them additional training.

"We have TAs and RAs not because when they are recruited they're good at doing teaching and research, but because we look at them as students, we care about the quality of our programs, and we want to train the future academics," Kachani said.

With work and academics intertwined, some have raised the concern that the formation of a union could infringe on academic matters. In a hypothetical described in an amicus brief submitted to the NLRB by Harvard and eight other universities, unionized graduate students could file a grievance claiming that grading essay responses to an exam rather than multiple choice answers would unfairly increase their workload.

GWC has pushed back against these allegations, arguing that they would only look to negotiate "bread and butter" employment issues, not academic issues. But for students like Engineering Graduate Student Council President Emily Moore, the concern persists that the line between the two could blur.

"The thing that's tricky is [that] your academic and your work life is very intimate at a university as a graduate student," Moore said. "It's oftentimes difficult to distinguish between what is a purely work-related matter and what's an academic matter." 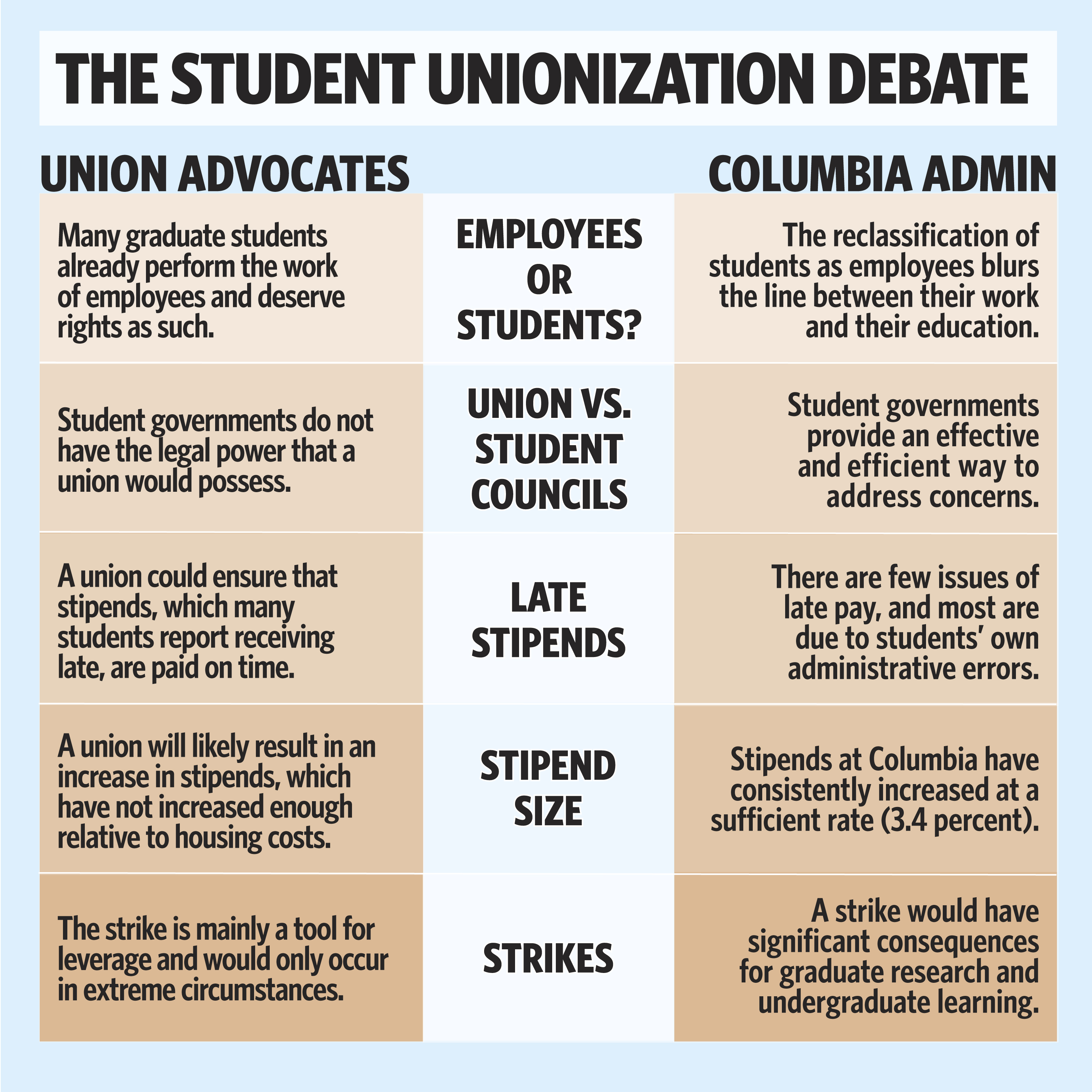 Finding the correct avenue for grievances

Unionization would initiate collective bargaining, which would allow students to address employment concerns with legal backing. But could potentially make it harder to address individual concerns within each school of the University.
The union would be comprised of students who work as TAs and RAs from various graduate schools and levels of study, ranging from undergraduate to graduate, and would have to accommodate their diverse interests in a single contract.

Moore supports this idea, citing a recent instance in which EGSC worked with the dean's office liaison for facilities to increase late-night access to Schapiro and Mudd.

"Is that a work-related issue, or is it an academic issue? At this point I'm not really sure," Moore said. "I don't know how effective it would be if we go to our union representative, then they have to bring it to the general body, and then they contact the liaison for the dean's office. We got that done in 40 minutes."

Although the administration is encouraging students to voice their complaints through student government organizations like the University Senate, some student government representatives say that employment issues do not come up in their meetings.

"These are not things that either the senate or the student council deal with," said Ian Bradley Perrin, a union organizer in the Mailman School of Public Health who has served on GSAC and the senate. "There's a reason for that: because neither of these bodies make decisions that are legally backed. A union, on the other hand, has the power to bargain and make decisions and get a contract which is legally binding."

Graduate students in favor of unionization have argued that having a union in place would help them address being paid late and contend that a union would increase their pay as well. However, it is in fact unclear how negotiations would impact payment for students in the union.

Although the exact financial implications of unionization have yet to be determined, it would undeniably have economic ramifications for the University. Each graduate school would be individually responsible for the payments incurred by the contract.

"Each school is going to be affected differently in terms of how it can manage and sustain the requirements of a union contract, so the idea that this is a Columbia cost or that Columbia is going to come in and pay for the terms of the contract is really not realistic," Alonso said.

Administrators emphasize that union members will have to pay two percent of their stipends in union dues, while graduate students who do not join the union will most likely have to pay a comparable amount as part of a closed-shop agreement. However, students argue that a union will likely result in an increase in stipends in order to compensate for the union dues and in response to rising housing costs.

As a model, the GWC points toward NYU, the only private university in the country with a graduate student union, where stipends increased 38 percent under the initial union contract in 2002. Currently, NYU's stipend is lower than Columbia's.

Stipends at Columbia have increased at an average rate of 3.4 percent over the past 12 years. According to the Office of the Provost, stipends will continue to increase at least three percent each year for the next three academic years.

In addition to stipend size, graduate students across different schools have complained about receiving late stipends. GWC claims that the grievance procedure instituted by the union would remedy these errors, but administrators argue that it would not have a significant impact.

According to the University, many of the late pay issues are due to students misfiling paperwork and submitting their paperwork late. In 2015, Spectator reported four cases of late payments due to clerical errors. Kachani emphasized that the University takes late pay seriously.

"One student being paid late is a major issue," Kachani said. "The instances where we have late payments are very few."

The University has responded to the issue through the creation of a helpline for students to call about being paid late. According to Perrin, the creation of the helpline "speaks to it being a widespread issue among grad students."

If graduate students are dissatisfied with working conditions, unionization would allow them to strike. Graduate students say that the strike is mainly a tool for leverage and would only occur in extreme circumstances.

At NYU, TAs went on strike when the university refused to reopen negotiations after their contract expired in 2005 and threatened a strike again in 2014. At many public universities with graduate student unions, students have not gone on strike because states have instituted anti-strike laws.

"The union has an economic weapon, which is a strike that it can use," Alonso said. "When you have a union in a private context you don't have the same kinds of limitations in terms of the use of those economic weapons you have in the public context. That means that we are walking into a terrain where we will be in essence legislating practice as we go along, and it is that uncertainty that is a little unsettling for us."

Employees represented by UAW at Columbia have gone on strike in the past, though not often. A strike would have significant consequences for graduate research and undergraduate learning and may impact students in each school differently.

"The ability to complete their degree is definitely hampered for engineering students or science students who are not able to access their labs, versus a humanities student who is able to potentially continue their research," Kachani said. "Our engineering students will be impacted in terms of their ability to finish their degree because of a negotiation on some other population in the bargaining unit."