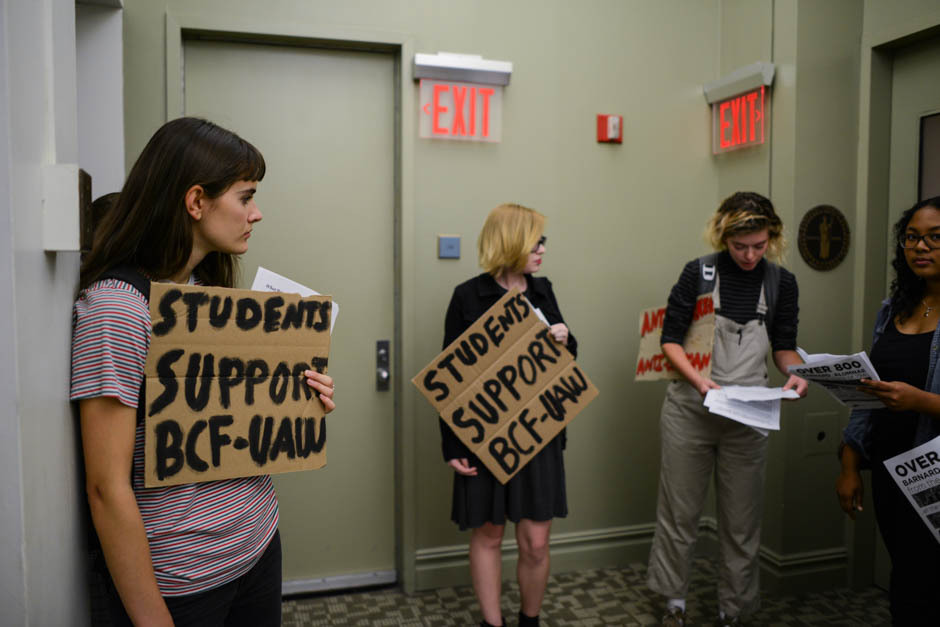 The union will now have the right to strike at any time during negotiations without prior notice to Barnard.

A supermajority of the Barnard contingent faculty union has voted in favor of a strike authorization.

"I just want to make it clear this doesn't mean we're going on strike," adjunct English lecturer and member of the union's bargaining team Sonam Singh said. "We're committed to the bargaining process and are committed to bargaining for a fair contract."

Of the 180 members of Barnard's adjunct and non-tenure-track faculty that the union represents, 119 members voted to approve the strike authorization. Fifteen members voted against the authorization and 46 abstained from voting. The resulting 89 percent approval exceeded the two-thirds majority necessary for the vote to pass.

Singh said that this is the third vote that the union has had since last October and that he remains proud of the union's progress.

"I am very proud of our strength, our solidarity, and our resolve, and I really think that whether the administration comes kicking and screaming, we are going to make Barnard a national leader in the treatment of contingent faculty," he said.

Provost and Dean of the Faculty Linda Bell told Spectator that on behalf of the administration, she was "disappointed" to learn that the union had confirmed a strike authorization.

"That the union leadership continues to assert that the administration is somehow stalling or hasn't made any serious proposals, that this, in fact, couldn't be further from the truth," she said. "The college made a substantive economic offer more than three months ago that ... we have yet to receive a response to, that the union has yet to respond to."

Members of the bargaining committee said that they have not formally responded to the college's economic proposal because the focus of recent bargaining sessions has been on non-economic conditions of the contract, and added that they felt that the college continues to not take their economic demands seriously.

Bell said in "the unfortunate event" that the union chooses to move forward with a strike, the college would minimize the impacts of a strike by changing class times and locations as needed, and that all faculty who are not members of the union would be expected to continue teaching at the college as normal.

"The administration wants to reassure that we'll make every effort to keep the college operating as normally as possible," Bell said. "No matter what, we'll do our first principle thing, which is to continue to bargain fairly and in good faith to reach an equitable first contract."

The contingent faculty union and the college have met a total of 20 times since February, and three more negotiating sessions are scheduled before the end of the semester.

Negotiations toward a first contract have been hindered over disagreements between the two parties on certain economic provisions, including wages and benefits. However, both sides have maintained that they are hopeful that an agreement can be reached before the end of the semester and without the need for a strike.

The union and college are scheduled to meet for the 21st time on Friday.