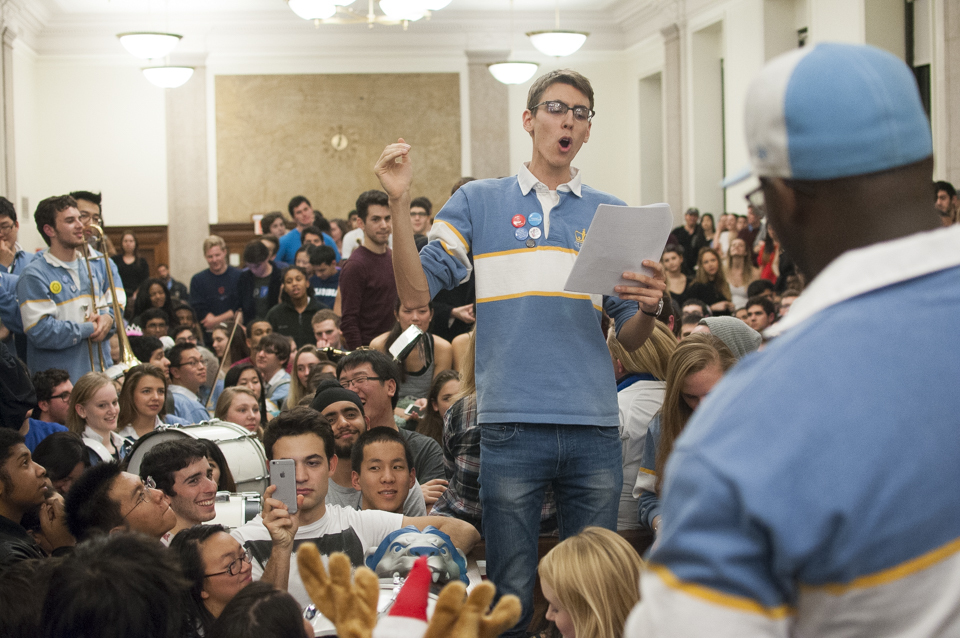 The Columbia University Marching Band will perform outside of Butler this year, following the University's decision to ban Orgo Night from the traditional location of Butler 209.

In response to the University's decision to deny the Columbia University Marching Band access to Butler Library for Orgo Night, CUMB will instead perform directly outside Butler, and has promised the performance will also serve as a protest against the University, according to a statement from CUMB sent to Spectator Thursday morning.

Students and alumni have reacted to the University's decision to bar the band from entering Butler with a mix of shock, anger, and, for some, vindication. Orgo Night, which has taken place in Butler 209 since 1975, is seen as one of the University's few long-standing traditions, but the event has been a source of controversy in recent years for its jokes and advertisements satirizing the preceding semester, often with racial and sexual overtones.

In its statement, the Marching Band called for students to join the band in protest outside Butler Thursday night to demand that administrators increase transparency in decision-making processes and exert less control over where students hold events.

Despite outcry from students and alumni, University Provost John Coatsworth stood by the administration's decision in an interview with Spectator Wednesday afternoon, maintaining that it was meant to keep the band from distracting students studying for finals.

CUMB Head Manager Liz Pudel, BC '17, said Wednesday night that, regardless of how students feel about the content of CUMB's performance, they should be concerned by the University's decision to restrict access to Butler.

"This will have far more implications than administration would like us to believe it has… this is something that undermines students' right to free expression," Pudel said. "To redirect complaints at past controversies really misses the mark."

But Coatsworth said that he believes preventing the marching band from entering Butler will not significantly change the nature of Orgo Night.

"We just want to protect students' ability to study for their final exams, and we offered the band an opportunity to perform in multiple other locations with whatever help we can give them," Coatsworth said. "The jokes will be as funny as they always are, only the location will change."

Coatsworth offered no new insight as to why Orgo Night was moved this year after over 40 years of taking place in Butler, adding that the timing was "just an accident."

The change has reignited a debate among students about the event's content that comes during a discussion of political correctness on college campuses nationwide—and especially at Columbia.

Students have also voiced concern that this significant change to one of Columbia's few regular traditions is part of the administration's "War on Fun," which has limited community-building events on a campus that is known as one of the most stressful in the Ivy League.

"I think ten years from now when I'm looking back on my time at Columbia and the traditions that we do have like orgo night and bacchanal and homecoming and now increasingly the fall lawn party, I wouldn't be happy with my work trying to advocate for students if a time-honored tradition was really shut down in that one instance," University Senator Sean Ryan, CC '17, said. "Traditions like Orgo Night, though imperfect, mean something to our community."

Alumni familiar with Orgo Night from their time at Columbia have expressed alarm at the University's decision to prevent the band from entering Butler.

"I understand current undergraduates are such delicate snowflakes that exams are cancelled because they cannot cope with the results of a presidential election," Don W. Joe, CC '81, wrote in an email to Spectator. "When I attended Columbia College, one of the highlights of the year was the Columbia Band playing in the College section of Butler Library."

Although the administration will allow Orgo Night to be held in a different location, students argued that holding it in Butler was what made the tradition particularly memorable.

"A satirical event can happen anywhere on campus, but the fact that it's in Butler, the most stressed place on campus the week before finals, made it Orgo Night, and I liked the statement that it made," Josh Pilchik, GS '19, said.

But for several current students who have taken issue with Orgo Night's incisive comedy, the decision to block the band from Butler was seen as vindication.

"The main issue that I take with Orgo Night is that it hurts and marginalizes people on campus. For an activity that has an apparent goal of relieving stress among students during finals, it definitely has the ability to incite stress among these marginalized identities," Maya Matthews, CC '20, said. "If students do not want to cancel Orgo Night, then CUMB can at least change the jokes. That's all."

But even students who said that they were opposed to CUMB's antics expressed concern at the University's decision to alter the intervene in student speech.

"Essentially I'm torn because I think it's imperative to root out violent discourse that actively marginalizes people and makes this really hard place even less comfortable for people here," Ben Bieser, CC '19, said. "But establishing a precedent of institutional intervention in student activities can definitely turn sour pretty fast."