Students to march in historic inauguration protest against Trump

Students to march in historic inauguration protest against Trump 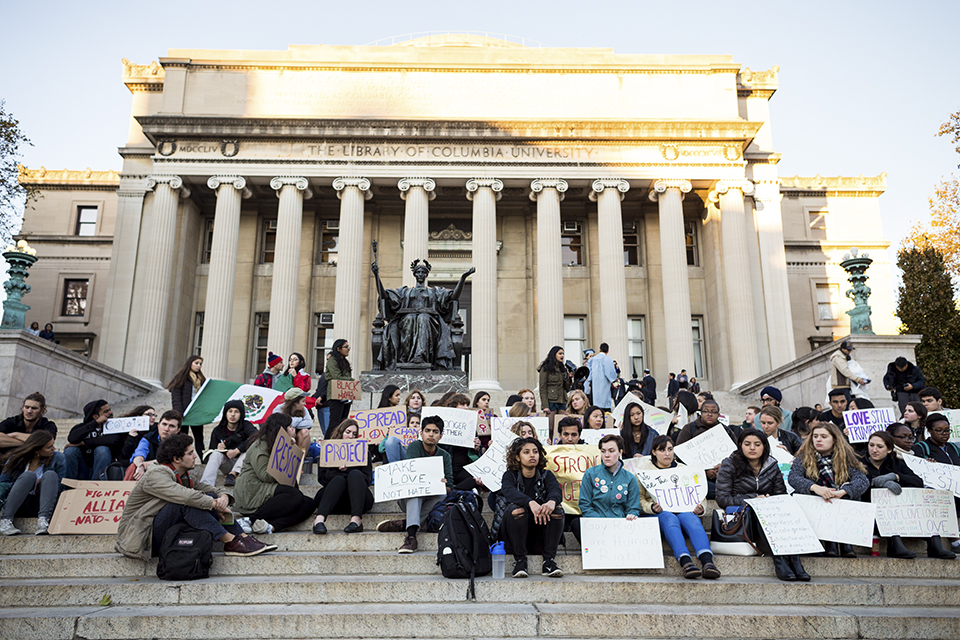 Four groups will mobilize transportation to participate in the Women's March on Washington on Saturday.

With less than a day until President-elect Donald Trump's inauguration, students at Columbia and Barnard are mobilizing to protest as part of Women's Marches in both New York and Washington, D.C. in opposition to the new president.

Students and faculty have reacted strongly to the implications of a Trump presidency. Shortly after the announcement of Trump's victory, students reacted in shock and dismay, fueling protests, class cancellations, and panel discussions in the days following.

Now, many of these students are looking to historic Women's Marches taking place this Saturday—the day after the inauguration—to further protest the president-elect.

Columbia Barnard Hillel and Columbia Against Trump will each send a bus to Washington, while another group, Beyond the Box—a program designed to help incarcerated individuals enter colleges and universities—is currently raising funds to send a third bus. A bus sponsored by Barnard College Residential Life and Housing, the Athena Center, and Barnard Student Life will also depart for Washington.

Those who have signed up will leave early Saturday morning and participate in events and protests that will take place in Washington from as early as 7 a.m. Ultimately, they will take part in the Women's March on Washington, which is predicted to have over 200,000 people participate on Saturday, and return to campus that evening.

For Columbia Against Trump, a faculty-student coalition formed to combat Trump shortly after the presidential election, this trip will be one of its biggest acts of resistance since its creation.

Sumaya Awad, a visiting junior at Columbia College from Williams College and a representative of Columbia Against Trump, spoke on behalf of the coalition and said CAT is motivated by the fact that many students—such as international students, undocumented students, and LGBTQ students—are likely to be greatly affected by the new presidency.

"Students are ready to engage in this, ready to stand up to Trump and his cabinets. [We] will discuss what we want to accomplish this semester and how to deal with the Trump era that is in less than a week," Awad said. "[We will] show Trump if he tries to silence us, the voice of dissent will grow louder."

Meanwhile, Columbia Barnard Hillel will hold programming both before and during the March on Washington to oppose Trump. The group will celebrate the Sabbath in Washington, after which they will attend the Women's March, and plans to hold a panel on the day of inauguration.

"This Shabbat on campus after our Friday night dinner, there's going to be a panel of sorts of various activists for those who are interested, from different fields for race relations, anti-war policy, education, gay rights," David Quintas, CC '18 and President of Columbia Barnard Hillel, said.

The Beyond the Box initiative has also been actively encouraging Columbia students to attend the Women's March on Washington.

"Our primary role is reaching out to members of the University and encouraging them to go to the Women's March and to help them find the transportation and resources to make it happen," Leyla Martinez, GS '18 and the president and founder of Beyond the Box, said.

Members of Columbia University Democrats, meanwhile, plan to participate in the various protests in Washington and around New York City, although the student group has no plans to organize travel for members who choose to go.

"I think all of our work this semester will reflect a lot of how we are responding and thinking about Trump's new presidency," Shoshana Lauter, BC '18 and president of CU Dems, said.

Lauter added that, other than inauguration protests, the organization does not plan to significantly alter its agenda following Trump's election.

"I don't think [Trump's] presidency is going to make us stop doing the work that we already are passionate about," Lauter said.