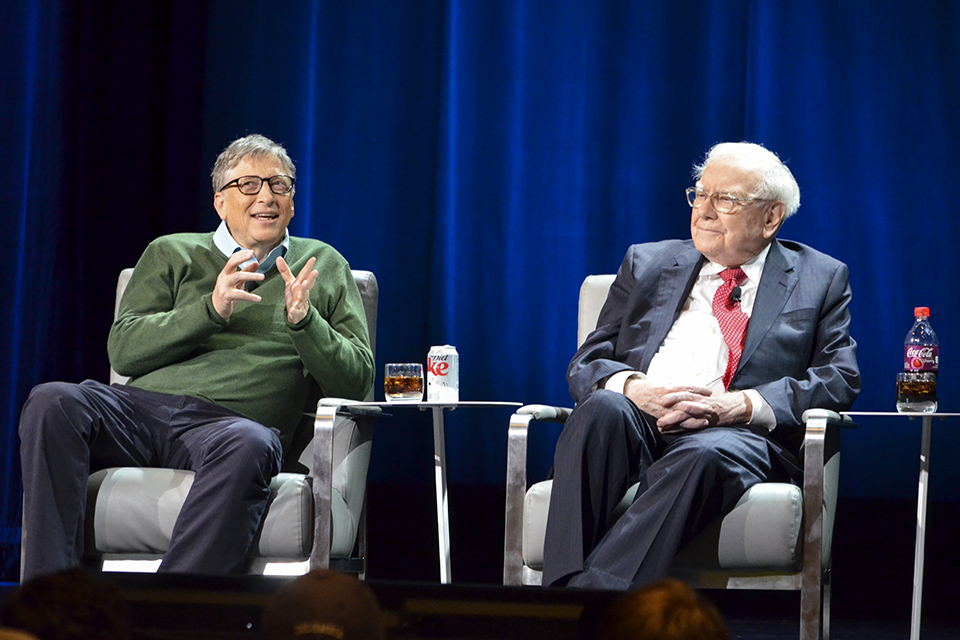 Gates and Buffett shared their perspectives on some of President Donald Trump's first actions in office.

Like many Columbia students, Warren Buffett "practically lived" in Butler library during his time on campus.

Buffett, who graduated from the Columbia Business School in 1951, spoke at Columbia on Friday alongside Bill Gates at an event moderated by Charlie Rose. The speakers took questions from students in the audience and from Facebook in a discussion of their friendship, philanthropy, and outlook for the world after a tumultuous election that landed Donald Trump in the White House.

Both Buffett and Gates shared a positive vision for the country and the world, portraying progress in technology and global health as unstoppable. They also encouraged current students to take full advantage of the world's dynamism by pursuing what excited them. But many students questioned how this worldview would be affected by the Trump administration.

Gates was hopeful about the future, but did express doubts that the Trump administration might cooperate with the goals of his foundation.

"I think American innovation is strong, support for research is by and large bipartisan, and so whether it's health breakthroughs or even energy breakthroughs … we're going to have more of those things," Gates said. "[On] things like foreign aid … every time there's new leadership we have to articulate the benefits."

Buffett brought up another area in which he hoped the Trump administration would take a different path: immigration reform. Speaking minutes after President Trump announced a temporary ban on immigrants from seven Muslim-majority countries, Buffett lauded the contributions of immigrants to the United States.

"This country has been blessed by immigrants, and you can take them from any country you want, and they've come here and they've found something that unleashed the potential that their home country did not," he said. "If it weren't for immigrants, who knows if we'd be sitting in this room."

Beyond the United States, Gates was wholeheartedly confident that global health would improve with the advancement of science.

"We are going to figure out obesity, cancer, even things that are very hard, like depression," Gates said. "I see this through the lens of the diseases of the poor, where with new vaccines and new drugs, we are moving faster than ever. Some of these are platform technologies like DNA vaccines, where just that one thing will give us lots and lots of solutions."

Buffett shared Gates' excitement for the future. He argued that students should select careers based on what interested them, rather than immediate necessity.

"I advise students as much as possible—look for the job that you would take if you didn't need a job," Buffett said. "You really want to be doing what you love doing. You can't necessarily find it on your first job, but don't give up before you find it."

Some students in attendance were curious about how Gates and Buffett reconciled their sense of public altruism with their immense private wealth. The students noted that with the globalization and technological advancements Gates' and Buffett's companies have promoted, less-skilled workers have been displaced by lower wages.

Gates said he understood the problem, although he saw it as secondary to the goals of increasing productivity.

Buffett agreed, calling free-market capitalism "an incubator for innovation in the United States."

Though both men were similarly confident about the future, they acknowledged its uncertainty. At one point, Rose recalled a time that Buffett had said he would give up a year of his life in order to see what happened in the next fifty.

"Even the next four, now," Buffett responded.