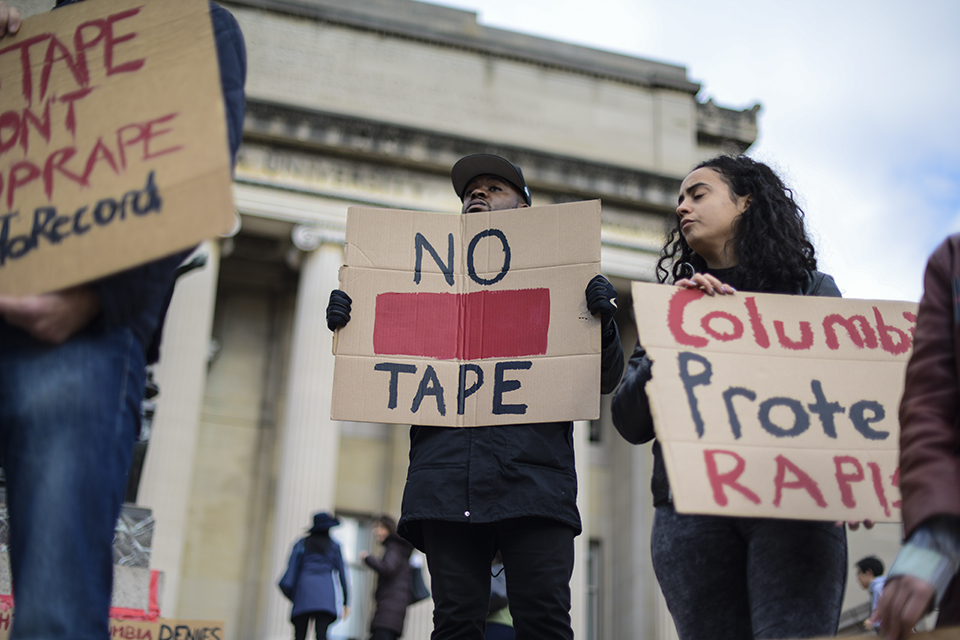 Columbia is tied second in the nation for the greatest number of open sexual assault-related Title IX investigations.

A Columbia student filed a federal lawsuit on Tuesday against the University for allegedly failing to properly handle her reports of rape.

The lawsuit comes during four ongoing Office of Civil Rights investigations into the University for allegedly violating Title IX in its response to reports of gender-based misconduct, with one investigating the same claims raised by this lawsuit. Dozens of investigations into Columbia have been opened by OCR since 2014.

In her complaint, plaintiff Amelia Roskin-Frazee, CC ’19, says she was raped twice during her first semester at Columbia, in September and December of 2015, in her dorm room. The complaint states that, in both cases, she was assaulted and restrained from behind, therefore unable to identify an assailant.

Roskin-Frazee lodged complaints against offices and administrators across the University—including many outside of those typically responsible for addressing gender-based misconduct and Title IX issues—for failing to report the two instances of assaults to the correct offices, not providing adequate accommodations, and interfering with her access to Title IX resources.

“Filling this was definitely a last resort, not a first,” Roskin-Frazee told Spectator. “At this point I’m very angry with them, and also disappointed, there being damages that I need reimbursed that they are not reimbursing me for.”

The University has declined to comment, citing a policy against commenting on pending litigation or specific complaints of gender-based misconduct.

The complaint alleges that Roskin-Frazee, a lead activist with the anti-sexual assault activist group No Red Tape, told administrators about being raped as early as December 2015—including Executive Vice President of University Life Suzanne Goldberg during a meeting with Roskin-Frazee and other activists.

But the University allegedly did not launch an investigation until September 2016, when Roskin-Frazee officially reported the two rapes to the Office of Student Conduct and Community Standards.

The complaint claims that Roskin-Frazee was initially told that SCCS could not launch an investigation if she could not identify a suspected perpetrator, which would violate Title IX law. Once it did commence, the investigation allegedly lasted only 26 days and did not include any interviews, review of swipe logs into her building, or review of security camera footage.

A host of administrative offices implicated

In addition to Goldberg and SCCS officers responsible for investigating Roskin-Frazee’s reported rapes, the complaint names six University offices that allegedly contributed to a hostile environment for Roskin-Frazee, gender discrimination, and negligence.

The complaint also alleges that Sexual Violence Response staff who fielded the initial call were not adequately trained to respond to victims of sexual trauma, claiming that an SVR nurse did not give the plaintiff information regarding her rights under Title IX and treated her callously.

When Roskin-Frazee asked to move to a different residence hall, the suit claims, she was instructed that she would be given 24 hours to move by Housing, would receive no assistance, could be charged up to $500, and would have to inform her parents.

Roskin-Frazee’s complaint also alleges that Columbia Counseling and Psychological Services, Disability Services, and her academic adviser did not inform her of her Title IX rights and failed to adequately accommodate the trauma that followed her assaults.

A history of federal involvement

Roskin-Frazee’s case is not the first time federal attention has been drawn to Columbia’s handling of gender-based misconduct cases. Currently, Columbia is tied second in the nation for the greatest number of campus sexual assault Title IX cases opened against a university. 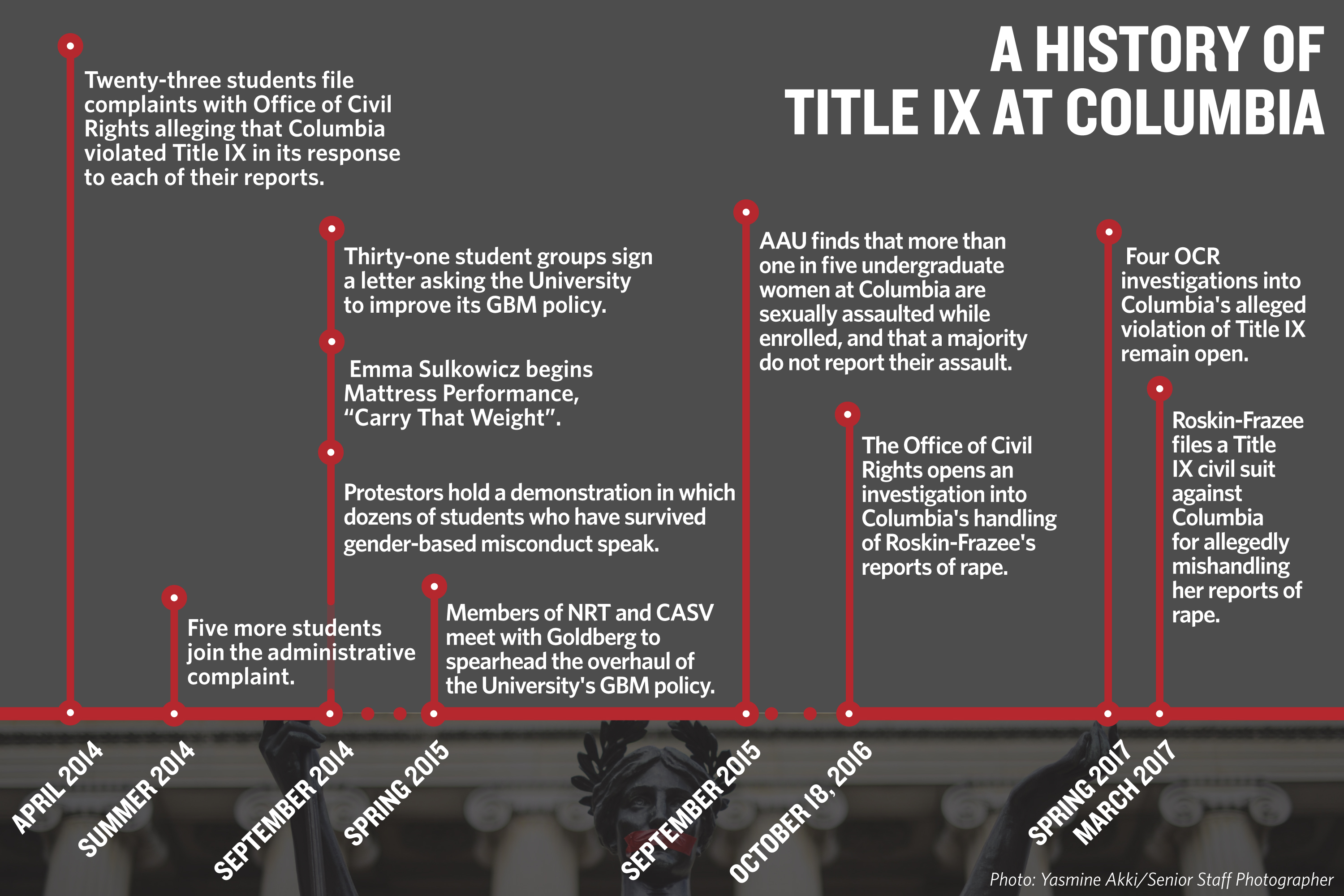 “It appears that Columbia really hasn’t made meaningful changes in the way that they address sexual violence on campus—they are currently under four OCR investigations, that hasn’t seemed to provide the motivation for them to change,” Roskin-Frazee’s attorney Alex Zalkin said. “Hopefully by being forced to answer in the civil justice system, it will effectuate some change.”

Most notably, in April 2014, 23 students filed administrative complaints with the Department of Education’s Office for Civil Rights claiming that Columbia violated Title IX through the manner in which the university addressed each individual’s gender-based misconduct case.

Since then, the University implemented a mandatory Sexual Respect Initiative for students and, in spring 2015, Members of No Red Tape and Coalition Against Sexual Violence met with Goldberg to spearhead the overhaul of the University's gender-based misconduct policy.

In September 2014, Emma Sulkowicz, CC ’15, began Mattress Project (Carry That Weight), during which she carried her 50-pound mattress with her on campus until she either graduated or the university expelled her alleged assailant.

The most recent lawsuit brought by a student against the University was by Paul Nungesser, CC ’15—the defendant in the Sulkowicz case—claiming that the University had failed to protect him from harassment due to his gender.

Roskin-Frazee’s suit argues that she has suffered psychological and emotional harm, as well as a loss of educational and extracurricular opportunities. In addition to damages for that harm, she is seeking punitive damages from the University.

According to Zalkin, the suit’s allegations that administrators did not inform the plaintiff of her rights after she described her assaults constitute interference with Title IX resources.

Roskin-Frazee added that she hopes the lawsuit will result in a change of practice within the University.

“No one should ever have this happen to them again. And so if this is a way to hopefully make that happen, it’s worth it,” she said. “I don't regret doing it, even though it's hard. As I said, it’s kind of a last resort, it’s kind of a necessity at this point for survival. So it’s not even a choice.”