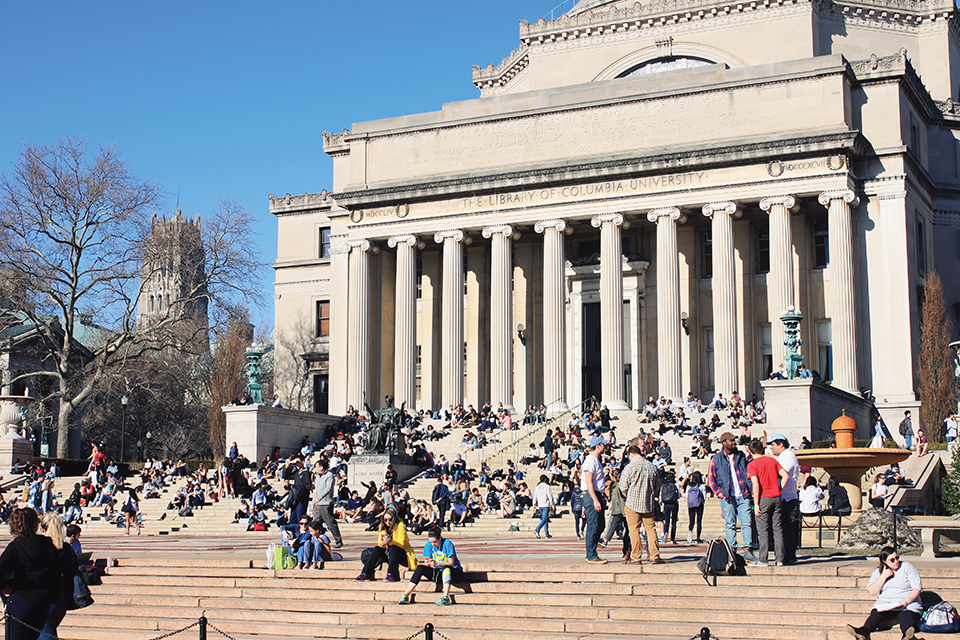 Charles Murray, a controversial social scientist, was invited to speak by Columbia’s chapter of the American Enterprise Institute, a conservative think tank.

In anticipation of controversial social scientist Charles Murray’s lecture on campus Thursday, nearly 150 faculty members have signed a statement condemning Murray’s work but firmly supporting his right to speak at the University.

Murray was invited to speak by Columbia’s chapter of the American Enterprise Institute, a conservative think tank. Following an incident earlier this month when Murray was violently protested at Middlebury College, Columbia students and faculty have been debating free speech in the context of his upcoming visit.

Murray’s 1994 book, “The Bell Curve,” has been criticized for its claim that African Americans and other people of color are genetically inferior, which, he claims, is the primary cause of social inequality. On Thursday, Murray will be discussing his 2012 book, “Coming Apart,” which focuses on poor and working class white people.

“Murray has every right to publicize his ideas, but we have a duty to object when he does so by assaulting foundational norms of sound scholarship and intellectual integrity,” the faculty statement reads.

The statement goes on to counter several of Murray’s claims, arguing that much of his methodology is based on inaccurate science. However, the statement repeatedly emphasizes that despite this disagreement, the goal of the University should be to “encounter and encourage ideas that challenge settled notions of truth.”

The statement also addresses legislation initiated by the Goldwater Institute and the Ethics and Public Policy Center that seeks to limit student protests on campus, noting that students should retain the right to express opposition to certain speakers.

“We believe strongly in the right of student groups to invite speakers of their choice to campus. But by the same token, those who find those speakers’ views abhorrent have an equal right to express their disagreement in a vigorous, although nonviolent, manner,” the statement reads.

The full statement and its signatories can be found below:

We are Columbia University and Barnard College faculty committed to maintaining a diverse intellectual community in which teaching, learning, and academic research flourish, where any particular intellectual orthodoxy is eschewed, and where we encounter and encourage ideas that challenge settled notions of truth.

We note that Charles Murray has been invited to give a lecture on our campus on March 23, 2017. The event’s pre-publication material indicates that Murray will be “expand[ing] upon the arguments he originally made in Coming Apart by discussing the cultural divides between America’s ‘new upper class’ and ‘new lower class.’”[1]

There may be members of the Columbia community who will welcome the opportunity to hear Murray’s views on the election of Donald Trump, read through the lens of his book Coming Apart. Without engaging in anticipatory condemnation of Murray’s remarks, remarks that have yet to be given, we take his invited speech at Columbia as an invitation for a pedagogical moment. Beginning with his 1984 book Losing Ground and taken up more fully in The Bell Curve[2] in 1994 and through his most recent writing, the corpus of Murray’s work has amounted to an ideological polemic that justifies the ongoing disenfranchisement of African Americans and other people of color, and more recently, poor and working class white people. Although his writings carry the rhetorical patina of science, Murray is largely regarded in academic circles as a rank apologist for racial eugenics and racial inequality in the United States. Murray has every right to publicize his ideas, but we have a duty to object when he does so by assaulting foundational norms of sound scholarship and intellectual integrity. We offer some important background on Murray’s writings in an effort to stand with those members of our community who are demeaned by Murray’s claims.

In The Bell Curve and in subsequent writings Murray argues that economically successful people can attribute their success to a kind of cognitive endowment, understood to amount to a high IQ. Given his view of the innate basis for IQ, most people are not suited to college-level study, Murray argues, and thus it is bad policy to encourage all Americans to go to college. Only 10-12% of 18-year-olds are cognitively equipped to thrive in college, according to Murray’s “expert” opinion. The “reality of IQ,” he maintains, shows that the overwhelming majority of young people get “nothing” out of college and thus should be tracked in their education toward a trade where they will live a happy, if modest, life. While Murray rests most of his claims on an analysis of class, it just so happens that Murray’s analysis suggests that African Americans do not enjoy the genetic endowment that would suit them to college-level study or economic prosperity. This is an outrageous insult to a significant part of the Columbia community.

For Murray, gene pools are primarily responsible for the stratification of American society, and “hand outs” to the genetic losers are not only ineffective, they’re counter-productive. Murray praises the “cognitive elite” for being “well mannered, good parents, and good neighbors,” while maintaining that “a lot of poor people are born lazy,”[3] and that “the mean IQ of welfare mothers is somewhere in the 80s, which means that you have certain limitations in what you're going to accomplish.”[4]

The problem is that the science on which Murray bases these claims has been thoroughly debunked by a wide range of scholars. The scientific veneer of which Murray makes use is made up of references to articles published in and writers associated with Mankind Quarterly, an anthropology journal well known for its racism and anti-Semitism. The journal’s founders were apologists for Nazi eugenics policies and the system of Apartheid in South Africa, and have robustly defended the mental inferiority of African Americans. Furthermore, much of the “scholarship” upon which Murray relies was funded by the Pioneer Fund, an organization with a distinctly eugenicist and racist agenda that funded research like Murray’s that maintained that “raising the intelligence of blacks or others still remains beyond our capabilities.”[5]

The through line of Murray’s polemic is one that rests almost exclusively on the notion of personal responsibility and desert: lower income people, particularly African Americans, bear responsibility for their disadvantage given that they are less intelligent, more lazy, and less God-fearing than more affluent people in the United States. By individualizing and naturalizing success and failure in American society, Murray underwrites the libertarian case that government measures to address systemic forces that create economic disparity (such as racism, capitalism, and neo-liberalism) are unnecessary. William Julius Wilson’s widely acclaimed 1987 book, The Truly Disadvantaged, systematically refuted Murray’s attack on the welfare state from a rigorous, scholarly standpoint. The consensus among sociology scholars is that Wilson won that argument.

Finally, while we reiterate our commitment to the robust exchange of ideas on Columbia’s campus – to which this letter seeks to make a contribution – we strongly condemn recent legislative efforts initiated by the Goldwater Institute and the Ethics and Public Policy Center that would censure, or worse criminalize, student protest or disruption on campus. Cynically mistitled “Campus Free Speech Bills” these bills seek to impose serious sanctions on students who engage in a range of otherwise protected speech and action in educational settings. Their effect would be to radically undermine the robust campus environment where ideas are hotly debated, contested, and argued in the name of eliminating any “disturbance.” We believe strongly in the right of student groups to invite speakers of their choice to campus. But by the same token, those who find those speakers’ views abhorrent have an equal right to express their disagreement in a vigorous, although non-violent, manner. Efforts to vanquish disturbance from our campus mirror similar efforts to impose civility norms on academic inquiry and debate. In our view, one of the primary aims and methods of a liberal arts education is to disturb well-settled beliefs, opinions, and notions of truth through reasoned and rigorous interrogation.

Bette Gordon, School of the Arts/Film

James Schamus, Professor of Professional Practice, School of the Arts

Gauri Viswanathan, Class of 1933 Professor in the Humanities

Deborah Paredez, PhD, Associate Professor of Writing, School of the Arts & Center for the Study of Ethnicity and Race

Elsa Stamatopoulou,, Director, Indigenous Peoples' Rights Program, Institute for the Study of Human Rights, and Adjunct Professor, Center for the Study of Ethnicity and Race, & Department of Anthropology