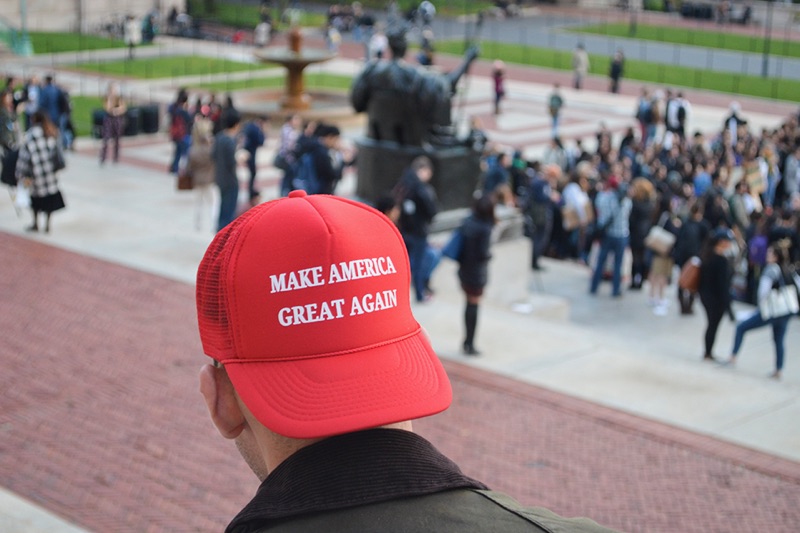 CUCR members said they invited the controversial speakers in an attempt to break up echo chambers and "safe spaces" on campus.

Columbia University College Republicans has invited white nationalist figures including Tommy Robinson and Mike Cernovich to speak on campus this semester, drawing statements of concern from other student organizations.

But on college campuses nationwide, such speakers have drawn massive protests in the past year, including demonstrations that shut down Murray’s speech at Middlebury College and right-wing provocateur Milo Yiannopoulos’s speech at UC Berkeley.

White nationalist Mike Cernovich, a blogger with a large social media following known for his incendiary approach to gaining influence, will speak on campus in October. Cernovich has called Islam a “death cult,” claimed that “diversity is a code word for white genocide,” and has a history of spreading conspiracy theories, including the debunked “Pizzagate” theory that Hillary Clinton ran a pedophilia ring out of a Washington pizza restaurant.

Blacks use guns for murder. Whites use guns to kill themselves. You can't talk "gun voilence" without defining terms, being honest.

When Columbia administrators announced that spaces in Lerner would be reserved for LGBTQ student groups and students of color, Cernovich tweeted that that the University was implementing an “illegal and immoral” policy that amounted to “racial segregation.”

Meanwhile, Tommy Robinson is co-founder of the English Defence League, a street protest movement dedicated to preventing the spread of Islamism and Sharia in the U.K., and co-author of the book “Mohammed’s Koran: Why Muslims Kill For Islam.” Robinson often condemns Islam, calling it “fascist and violent ideology which incites murder.”

President of CUCR Ari Boosalis, CC ’18, said that the club chose guests that represent all facets of the Republican party.

“Our club hosts speakers that [are] on the wide range of the conservative [or] Republican party,” Boosalis said. “Our job is to bring speakers that challenge this community and really give us a sense of what those ideologies actually [are], and we want our members to decide and figure out if they’re a conservative or Republican or whatever.”

Some students, however, are concerned about hosting speakers that have expressed such inflammatory rhetoric, and how that would reflect on the University.

“As a group we do not want to normalize their speaker choices by ignoring the events, but we also do not want to give CUCR attention for bringing provocateurs to campus,” Columbia University College Democrats Media Director Kris Ahn, BC ’20, said. “While we are interested in engaging in productive conversations and discourse, at this point CUCR’s choices in speakers do not seem to be seeking to facilitate that.”

“I think it’s kind of shameful that the Columbia University College Republicans want to associate themselves with those kinds of people,” Katia Ariyan, BC ’20, said. “It’s disgraceful that they want to tie Republicanism with racism and sexism because those two things are not inherently associated.”

Boosalis says that as long as the speakers believe in what they say and follow general Republican doctrine, he is open to hosting them.

Martin Shkreli, who gained attention when his company raised the price of the antiparasitic drug Daraprim from $13.50 per pill to $750 per pill, and was later indicted on federal charges of security fraud, is also on CUCR’s fall speakers list. Boosalis said the club is still working to schedule his talk given that he will soon serve time in prison.

Boosalis hopes that these forums serve as place where students can challenge the speakers and start a dialogue.

“We don’t really like safe spaces on the basis that we don’t think people are able to change themselves,” he said. “If you’re just listening to the same side, you’re not gonna learn anything about the other side. You’re stunting your personal growth.”