Twenty years after its creation, LGBTQ lounge moves to Schapiro

Twenty years after its creation, LGBTQ lounge moves to Schapiro 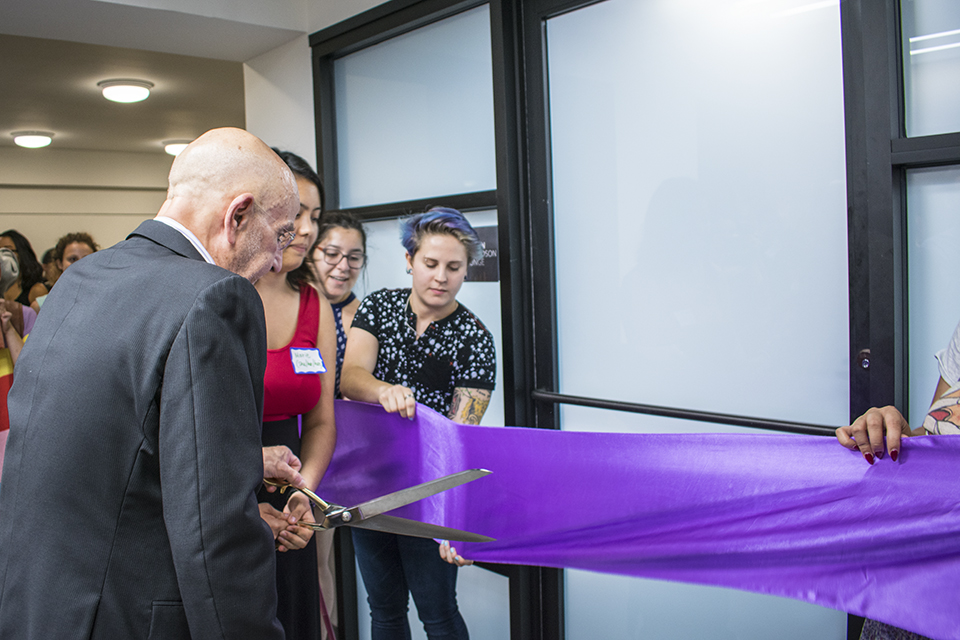 The event closed with a ceremonial ribbon-cutting, after which attendees were free to explore the lounge.

Wednesday evening marked the grand reopening of the Stephen Donaldson Lounge, a space for LGBTQ students located in Schapiro Hall. LGBTQ Columbia alumni affiliated with the alumni group Columbia Pride—who hosted the event with the Office of Multicultural Affairs—described memories and inconveniences of the old space.

For the past 20 years, the Stephen Donaldson Lounge has served as a haven and gathering place for LGBTQ students, operating out of the Furnald basement. The old location of the lounge, however, posed many issues, as it was located in a utility closet, was inaccessible to some students, and suffered a black mold infestation that destroyed many historical documents pertaining to LGBTQ life at Columbia.

Located on the first floor of Schapiro Hall, the lounge’s new location is more accessible, with swipe access for students from all four undergraduate schools. It also has large windows, new furniture, and lockers.

“This move is really exciting because it centralizes and moves something that was hidden in the basement to something that is more central to students and physically accessible to all undergraduate students,” Chris Woods, associate director of multicultural affairs and LGBTQ outreach, said.“It’s cool; it’s bright; it has windows; it is not in the closet and not in the basement. Out of the closet and into the light has been my tag phrase for it.”

Some students also voiced excitement that this lounge will serve not just as a social space, but also as a safe haven for LGBTQ members of the Columbia community.

“Especially in the city, a lot of people feel unsafe being in certain areas,” Charles Blackmon-Luca, SEAS ’19, said. “Having a dedicated space, even if it’s just that lounge, that people can not just use as a meet-and-greet place but also as a space where they can go if they are feeling unsafe … that’s really important because it can work as a safe haven.”

and General Studies Dean Peter Awn, who spoke at the inauguration of the first Stephen Donaldson Lounge in 1996. Awn focused his remarks on how far Columbia has come in accepting the LGBTQ community in the years since.

“It was a difficult time. People were still dying of AIDS on campus … To see faculty, students, administrators, [and] undergraduates die at really young ages was really traumatizing for the community. Perhaps worse was the stigma of not being able to talk about it,” Awn said. “It’s great to look around the room and see the extraordinary faces today that you wouldn’t have seen in 1997 and have the freedom to be who you are.”

The event closed with a ceremonial ribbon-cutting, after which attendees were free to explore the lounge.

The opening of the lounge coincides with the 50th anniversary of the Student Homophile League, now known as the Columbia Queer Alliance, as well as the 10th anniversary ofLGBTQ @ Columbia, run through the Office of Multicultural Affairs.

“I think [the reopening] says a lot about our campus and the fact that we are not willing to just let the past be the past, but we want to continue to push ourselves to be sure that we are doing what we can for our students,” Grant Pace, CC ’20, said.