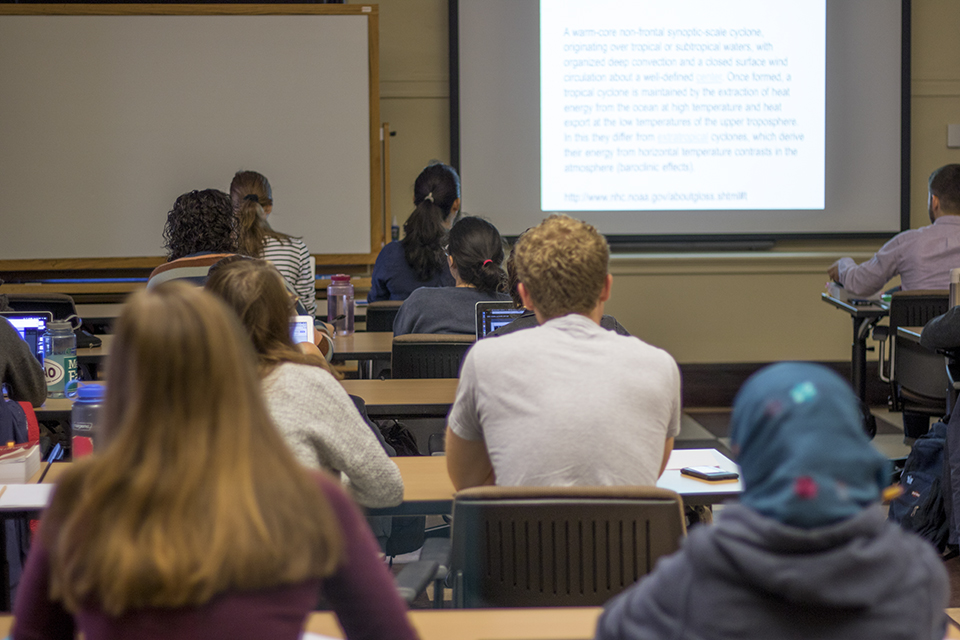 The strain on Arts and Sciences departments to provide all of the courses students need is exacerbated by phasing faculty into retirement, administrative course relief, and responsibilities across other departments and institutes.

In the English department in 2016, 18 professors—representing over a third of the tenured professors in the department—went on leave at once, leaving the department to offer almost a dozen fewer classes taught by senior faculty.

“It’s not meaningful to come to Columbia if you’re not getting great teaching,” English department chair and incoming Dean of Humanities Sarah Cole said. “You really want to [be taught by] the faculty. … That’s the population that is really stretched.”

Faculty taking leave is only one source pulling professors away from teaching undergraduates. The strain on Arts and Sciences departments to provide all of the courses students need is exacerbated by phasing faculty into retirement, administrative course relief, and responsibilities across other departments and institutes.

Arts and Sciences has struggled to avoid budget deficits in recent decades. In order to prevent the faculty from shrinking amid these financial problems, Arts and Sciences instituted the Timely Replacement Policy, which prevents the faculty from shrinking, but also from growing, according to University Provost John Coatsworth’s interpretation of the policy.

This lack of growth leaves Arts and Sciences departments struggling to mount curricula and simultaneously carry out administrative obligations. This challenge contributes to serious cuts in the number of undergraduate classes taught by senior faculty and a loss of advising capacity, leaving students struggling to take the courses they need for their major and preventing them from studying with the professors that initially drew them to Columbia. 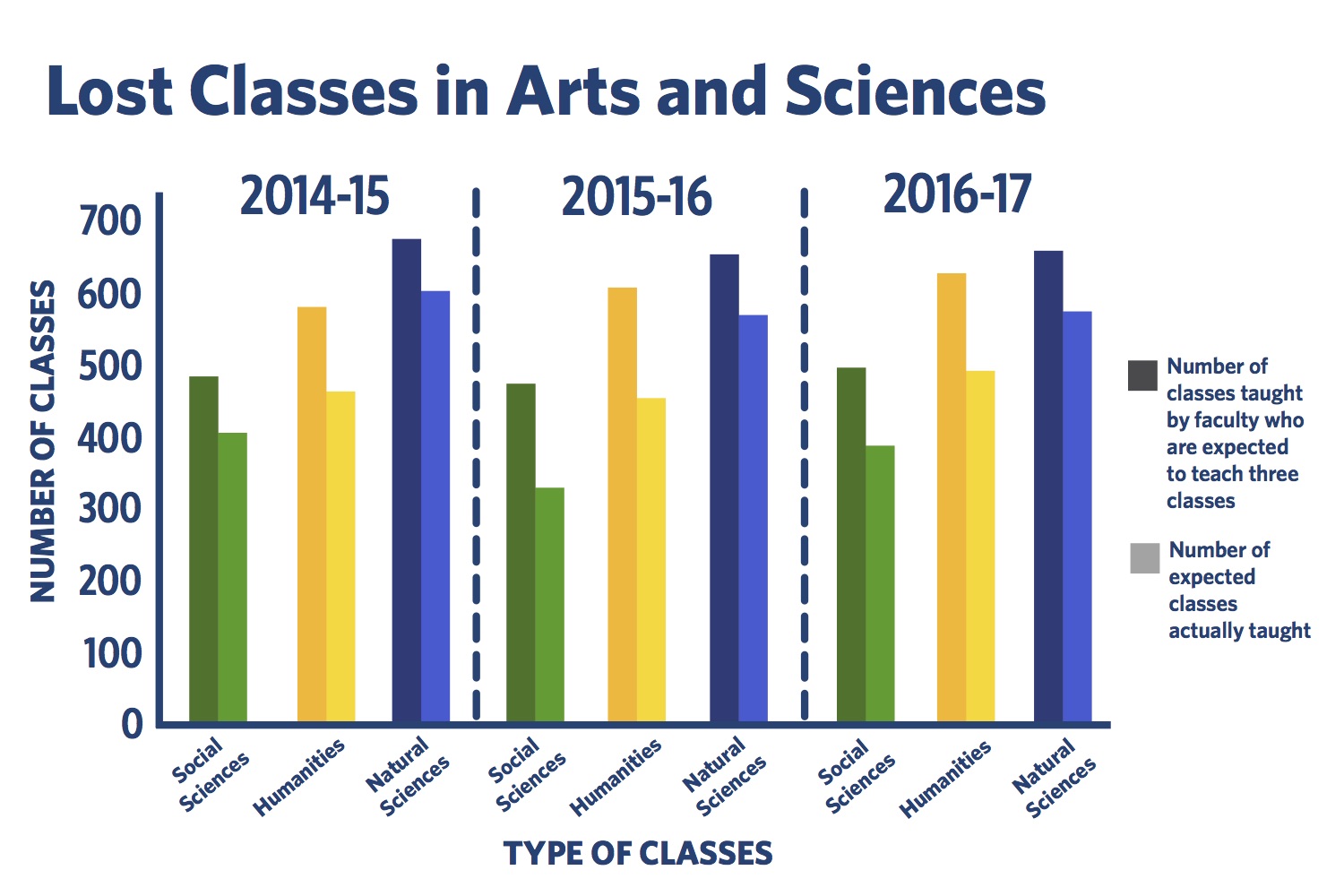 At the same time, taking leave is crucial in the world of academia for faculty to continue their research, and department chairs are loath to deny faculty requesting leave. Additionally, many other universities offer similar leave and retirement policies as Columbia, making any policy changes a potential harm to recruitment.

Executive Vice President and Dean of the Faculty of Arts and Sciences David Madigan said that he was aware that fewer courses were being taught by senior faculty than would be ideal. While he sees hiring more professors as the obvious solution, Madigan said Arts and Sciences’ financial constraints have prevented his ability to do so.

“We are trying to figure out what really is the kind of core of what a department needs to do,” Madigan said. “This is a temporary state of affairs, but we need to be financially in a position to support a larger faculty. And we’re getting there.”

Almost a third of social sciences faculty taught no classes in the 2015-2016 academic year, when dozens of professors took leave at the same time.

However, the provost has maintained that Arts and Sciences’ faculty size is sufficient as it is.

“It’s hard to justify growing a school when the number of students taking courses is not increasing,” Coatsworth said, “Unless you can make an argument that the staffing is inadequate as it is, and there’s not strong evidence to suggest that’s the case.”

Coatsworth’s assertion of an adequate faculty size contrasts with the accounts of department chairs, who said that their departments struggled to meet obligations when many faculty members took leave simultaneously. Many chairs also said that despite overall department size, they had trouble filling courses in specific subfields.

In the political science department, for example, there are half as many international relations courses offered this year compared to last. Ximena Eloisa Aparicio, CC ’19, a political science major, said that the lack of course offerings complicated her decisions about her major choices.

“For the subfields, there’s too few options, so it makes it hard to complete all of the ones you want,” Aparicio said. “It just made it hard to plan with the other requirements because there are so few options, you’d have to prioritize poli sci classes above something like the Core.”

In addition to difficulties fulfilling teaching roles, a reduced faculty is also unable to attend to administrative and advising obligations. In the French department, there was one year in which so many professors took research leaves that the department was unable to fill certain student advising roles.

“We have been stretched very thin—sabbatical and leave just happened to colleagues,” French Department Chair Souleymane Bachir Diagne said. “This is something that you cannot really prevent, because people have their leave. We give priority to the teaching in those cases. Where we were struggling was in administrative positions like having a director of graduate studies, director of undergraduate studies, job placement officer.”

Hiring more lecturers and visiting professors acts as a temporary fix when departments have large numbers of professors not teaching courses. However, these faculty members lack long-term ties to Columbia.

Jordan Stepaniuk, CC ’19 and an English and creative writing major, said that she was disappointed by not being able to take classes with a famous professor at Columbia.

“Before I came to Columbia, my dad told me that I absolutely had to take a class with James Shapiro, and I have tried each semester for the past three years, and never once gotten in, despite the fact that it’s also a requirement for my major,” Stepaniuk said. “I’m worried it won’t be offered senior year because the English major classes are so unreliable on a semesterly basis.”

For smaller departments, retirements and leaves can be particularly difficult to manage. Germanic Languages Department Chair Oliver Simons said that his department is currently struggling to offer students the same quality of instruction during a period in which over a quarter of its faculty are in phased retirement: a period before retirement in which faculty members teach fewer classes than usual.

“It’s challenging to develop a profile of the department,” Simons said. “One of these professors who just retired was really a star in the field and taught courses that were incredibly popular. And if he’s not replaced early enough, it just leaves us with some time where we have to struggle to reinvent ourselves. It would have been much better for us to have a junior faculty member while he is still here.”

Simons said that phased retirement also presents the issue of office space. Despite teaching fewer courses, faculty on phased retirement still occupy an office, which can be a problem for space-starved departments.

“If a retired professor decides to keep their office, there’s nothing you can do about it,” Simons said. “It’s been a problem. We’ve been able to hire a new faculty member, but she is using an office that is really not made for her, so she’s been waiting for another professor to move out so she can actually start to unpack her boxes.”

“The fixed number [of faculty] isn’t something anybody here is in favor of,” Cole said, referring to the Timely Replacement Policy. “There is no question in my mind why staying the same over decades in terms of your numbers is not good.”

Even if departments were given authorization to hire more faculty members, making predictions about leave is complicated by frequent administrative turnover, both in individual departments and in Arts and Sciences. Department chairs usually vacate their positions after three years, and most divisional deans also serve for only a few years before leaving.

Mathematics Department Chair Michael Thaddeus said that this phenomenon meant department chairs often struggle to predict about how many new hires they would need to cover professors on leave. Thaddeus also noted that many chairs find out about which professors are taking leave after they submit an estimation of how many hires they need for the year, which means they are taken by surprise if many professors take leave or begin retirement at the same time.

Simons said that departments have worked hard to weigh leave, retirement, and all of the other obligations taking faculty away from teaching, but students’ needs for courses and advising have often been left behind.

“It’s a difficult thing to balance, but students have to pay the price,” Simons said.