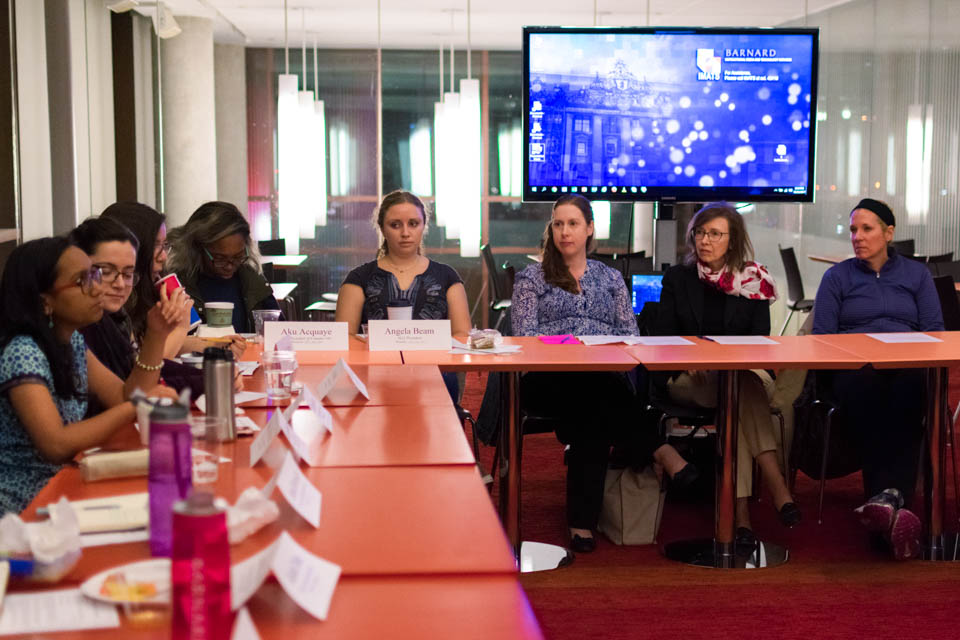 SGA president Angela Beam, BC ’18, said that the council will consider the request and release its decision on whether to offer support as soon as possible.

Three Barnard studentsfacing disciplinary action for interrupting a speech by white nationalist Tommy Robinson requested at the Student Government Association’s Monday meeting that the council offer formal support for them.

Protesters accused of interrupting or disrupting the speech, which took place on Oct. 10, were informed by Executive Vice President for University Life and Rules Administrator Suzanne Goldberg that they will face disciplinary action if found responsible.

Allison Emmet, BC ’18, one of the protest organizers speaking on behalf of the students under investigation, read a statement on behalf of all of the Barnard students facing conduct sanctions, asking that SGA support them and the right of all students to organize politically on campus.

Emmet said that student protesters did not disrupt Robinson’s speech, which took place on Skype, because he did not have prepared remarks.

SGA president Angela Beam, BC ’18, said that the council will consider the request and release its decision on whether to offer support as soon as possible.

Jaharis cited the ODS “case by case” policy for assessing student accommodations as problematic, saying that without guaranteed accommodations for certain disabilities, students often feel as if they have “no backing or support” when they present their case to the office.

In order for a student to register with ODS, they must schedule an intake meeting with either Corbran or Accommodations Director Nicole Bartolotta. At this meeting, students discuss their disability and their desired accommodations before the office decides which services to provide.

Corbran spoke about the rising numbers of students registered with the office and said that ODS takes pride in having these one-on-one conversations, as they are the best way to assess student needs.

“We try to find what is best to even the playing field, instead of just having predetermined options for a specific diagnosis,” Corbran said.

Another concern raised by students present at Monday’s meeting was the scrutiny they have faced from professors—including having their disability questioned or being pressured to disclose their disability—when presenting their approved accommodations to individual professors.

Nora Foutty, BC ’19, a student with a chronic illness, said that professors have pushed for her to disclose her illness in order to justify her accommodations.

“It’s often really stressful in the first week of school, going and meeting with each professor and having emotional, personal conversations with a stranger,” Foutty said.

Corbran admitted that there are professors who handle some accommodations inappropriately, as they are not supposed to ask students what their disabilities are, and students are not required to disclose this information. In these circumstances, Corbran suggested that students notify ODS so that it can provide clarification on its policies to the faculty member.

“Faculty sometimes say ‘no’ out of a place of thinking that such accommodations are not necessary in their classes,” Corbran said. “We talk one-on-one with professors, tell them about the issue, and talk with them.”

Later at the meeting, Corbran also spoke about changes to thenote taker recruitment process after some students were left without note taking accommodations last semester. The entire process is now internal and will no longer require students to submit a paper sign-up sheet for their professors to pass around the class and obtain note taker sign-ups.

Despite improvements to some classroom accommodations, Representative for Campus Affairs Mia Lindheimer, BC ’19, said that students with disabilities continue to face housing concerns.

At the end of the meeting, Beam proposed a finalized statement in support of Barnard affiliating with the Workers Rights Consortium, a request which was brought up by Student Worker Solidarity at SGA’s meeting last week.

The statement of support highlighted the need for “Barnard to act in line with the values that our mission statement espouses by ensuring that all Barnard apparel is produced in safe and equitable working conditions.”

The statement was approved by the council with 95.5 percent of votes in favor. Beam said they will send the statement to Chief Operating Officer Robert Goldberg and to other relevant administrators in the next few days.

Correction, Oct. 25: A previous version of this article incorrectly stated that it was Cobran said it was “impossible” to find housing that meets all student needs. In reality, she said that that there are some specific accommodations that do not exist in Barnard buildings.