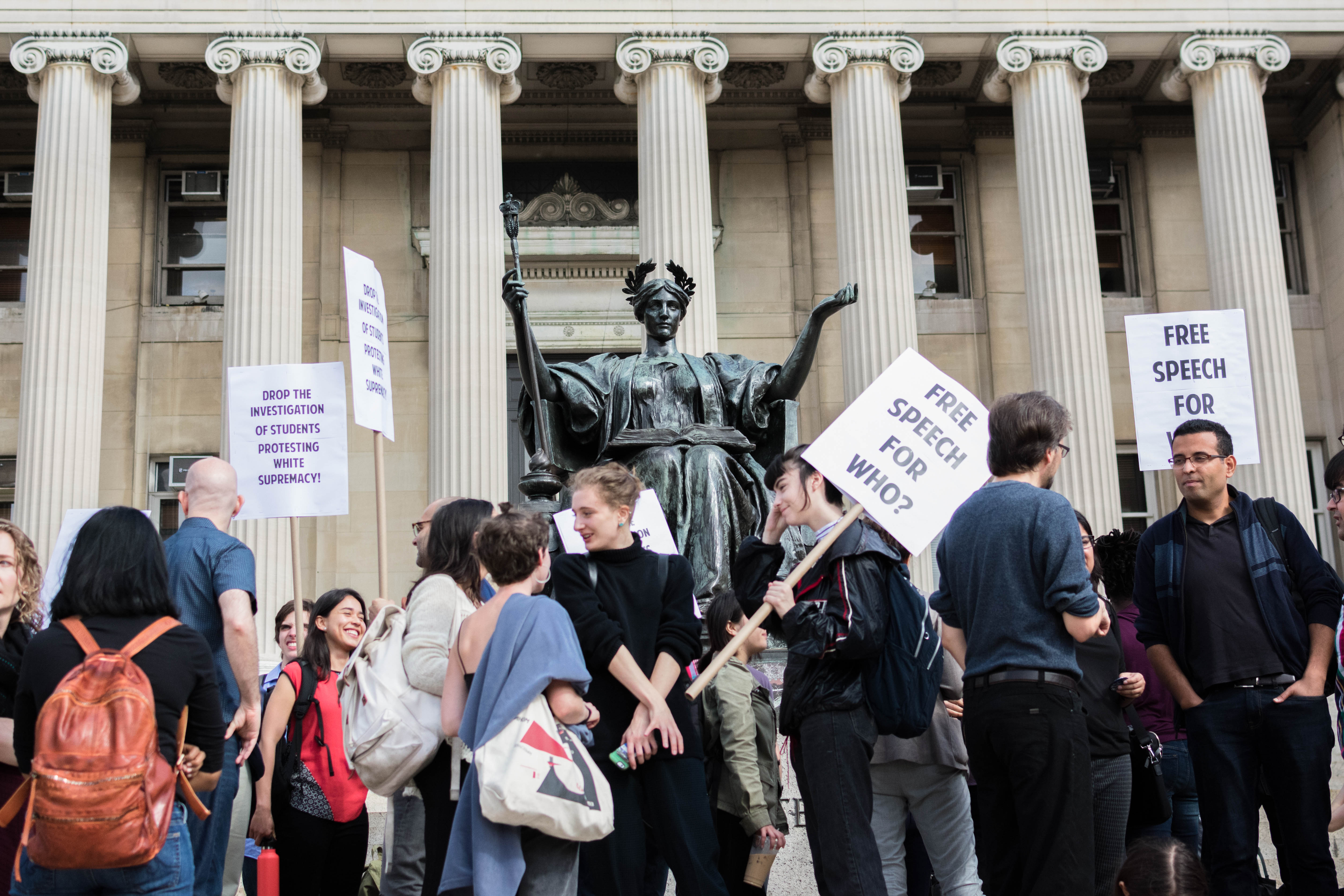 Students called for the administration to drop the investigation into the alleged disruption at a rally on Monday.

Students under investigation for the disruption of white nationalist Tommy Robinson’s speech at a Columbia University College Republicans event have been told by administrators that they will not be admitted to future CUCR events for the time being—a sanction enacted before students have been found responsible for violations.

During the event, over 30 protesters entered the auditorium, where a Skype call with Robinson was projected, holding signs, asking questions, and refuting Robinson’s answers. At times, protesters chanted so that Robinson could not be heard and interrupted questions asked by other students. Other students gathered outside, banging on doors to the venue.

In a statement to Spectator, some students under investigation for interrupting the event say they intend to disregard the ban and attend CUCR’s event featuring Mike Cernovich on Oct. 30.

Last week, Executive Vice President of University Life and Rules Administrator Suzanne Goldberg opened investigations against some of those students. If found responsible of disruption, students can face a range of sanctions, including expulsion.

Students under investigation were instructed by Provost John Coatsworth not to attend future CUCR events while investigations are carried out in an email last Tuesday. Being banned from future events is not listed among possible sanctions in the University Rules of Conduct, and typically students do not face sanctions until after being found responsible of misconduct by the University Judicial Board. As of yet, no such ruling has been made for the protesters under investigation.

In an interview with Spectator on Monday, Coatsworth said that his actions were precedented by University policy, citing a rule that allows the University President to prevent disruptions when a demonstration “poses a clear and present danger to persons, property or the substantial functioning on any division of the University.” This policy does not specify whether this power may be delegated to the Provost.

Coatsworth said that the sanction may be lifted if students agreed not to disrupt future events, and made clear the possibility of an informal resolution, in which case charges would be dropped.

“The Rules Administrator has, in a number of cases, resolved the issues that were involved informally and not pressed charges,” Coatsworth said. “In that case, presumably, students involved would pledge not to disrupt events and would no longer be subject to sanctions.”

Frank Lomonte, a legal scholar of students’ rights and former Student Press Law Center Executive Director, told Spectator that as long as students agree not to disrupt or interrupt future events, they should not be banned from them.

“As long as they agree to that understanding, then they should be allowed to come and listen just like anyone else,” Lomonte said. “If people aren’t prepared to agree to that—if they go into an event with the purpose and intent of interfering with the speaker’s ability to deliver the message or the audience’s ability to hear—then they can legitimately be excluded.”

Some students have called for the administration to drop the investigation into the alleged disruption. As of Monday evening, a petition titled “Don’t Discipline Students for Protesting White Supremacy” has reached almost 5,000 signatures. Though the petition refers to all protesters, sanctions are recommended specifically for students accused of disrupting or interrupting the event, not for protesting.

Earlier on Monday, about 100 students gathered on Low Steps and marched to Kent Hall, chanting “Free speech, free speech, you don’t practice what you preach,” and “Whose campus? Our campus.” Goldberg was holding one-on-one meetings with students under investigation in Kent to discuss their individual involvement (these investigations are still ongoing for many students).

The students undergoing investigation have defended their interaction with Robinson as a “robust debate” rather than a disruption. They cited the Affirmative Statement of the Rules of University Conduct, writing that their protest adhered to “principles of free speech and the right to demonstrate.”

In a meeting hosted by student activist groups last Friday, students in attendance also contested the University’s claim that a disruption occurred at the event, saying that they participated in the event by asking questions and arguing with Robinson’s points.

Much of the controversy stemmed from debate over how to characterize what happened inside the room where Robinson spoke. Goldberg’s original email describes a “serious” violation, which occurs when a person or group “disrupts” a function or “renders its continuation impossible.” Many of the protesters disagree with this accusation.

“The [CUCR] event still happened,” said Barnard-Columbia Socialists member Dylan DelGiudice, CC ’20, at the activist group meeting. “He still got to say what he wanted to say in response to questions, so [as] far as disrupting the event, it just didn’t happen.”