As hundreds protest outside, Mike Cernovich’s Columbia speech goes on as planned

As hundreds protest outside, Mike Cernovich’s Columbia speech goes on as planned 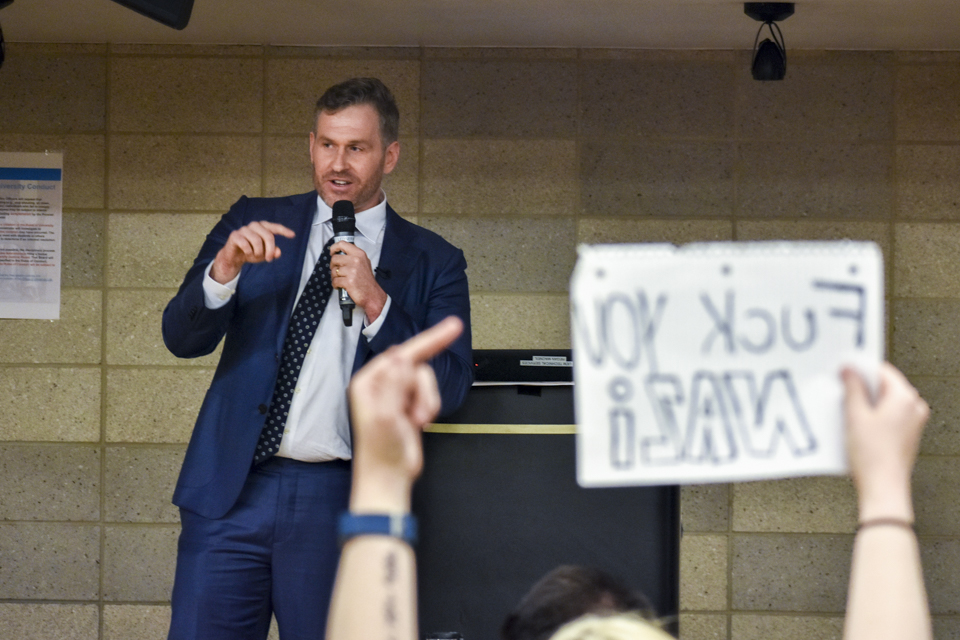 Unlike those at Tommy Robinson's speech at Columbia last month, most protesters were quiet during Cernovich's remarks, writing and displaying notes written on pieces of paper.

Cernovich, who has called Islam a “death cult” and said that diversity is “a codeword for white genocide,” was the latest in a lineup of conservative speakers including Tommy Robinson and Herman Cain invited to campus as a part of CUCR’s “Free Speech Month.” During Robinson’s speech last month, dozens of protesters were in attendance, heckling and interrupting Robinson as he spoke.

Inside the auditorium during Cernovich’s speech, over a dozen protesters were in attendance, in addition to over 30 other attendees.

“Fuck you,” one protester shouted as Cernovich entered the room and began speaking. “No one wants to hear it.”

While at least one protester repeatedly heckled Cernovich, calling him a liar and Nazi, most protesters sat quietly and held signs that read “You Lie” and “You’re Fake News.” At the Q&A portion of the event, nearly all the protesters lined up to question him.

Hours earlier, protesters—comprised in large part of members of groups not affiliated with the University—began marching from 124th Street and Morningside Avenue to campus. They congregated under the statue of Alma Mater before advancing past barricades by Butler Library, leading Public Safety officers to prevent anyone from entering Lerner Hall for a period of time. 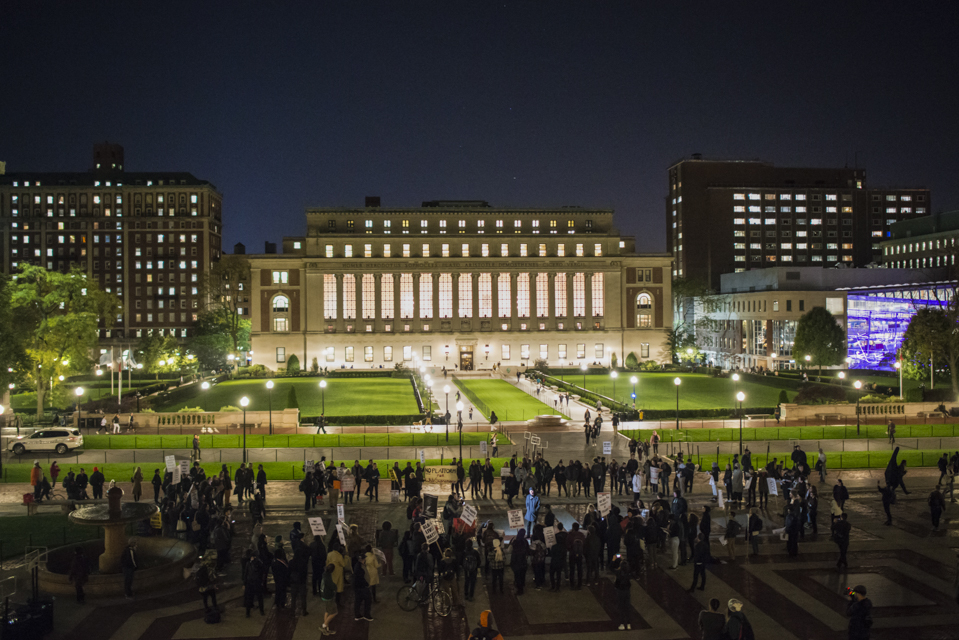 Over 15 New York Police Department officers stood on the sidewalk by the campus gates as protesters jostled pro-Cernovich and pro-Trump advocates in attendance, and dozens more officers arrived as the night progressed. Several police vans were on the scene as well, including one that escorted protesters as they marched down from 124th Street.

University officials said there was no police presence on campus—only on the streets surrounding it—though at one point a man in plain clothes flashed a badge and was allowed by Public Safety to pass through the Carman gates. University spokespeople did not immediately respond to a request to clarify this person’s affiliation.

Chants and speeches from protesters, some of whom were members of New York City’s antifa coalition who concealed their faces, took place in the Lerner lobby throughout Cernovich’s talk. Protesters remained largely peaceful, though some expressing pro-Cernovich opinions were shouted out of the building and a few CUCR members attempting to enter Lerner were shoved out.

At times, protesters and supporters of Cernovich outside of Lerner clashed. Jovanni Valle, a right-wing activist who has been involved in multiple altercations with authorities, including a protest of Public Theatre’s anti-Trump production of “Julius Caesar,” attended the event wearing a Make America Great Again hat and holding a large American flag. Valle began arguing with the crowd and accused a protester of stealing his phone before ultimately leaving. 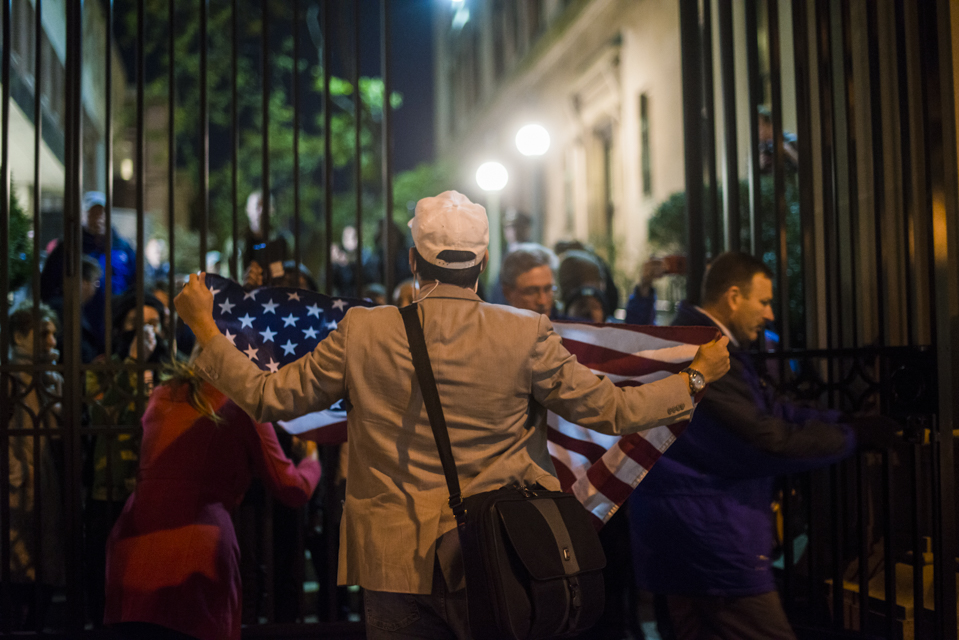 CUCR invited Cernovich to speak about “The Rise of the Alternative Media.” He spoke about media outlets, such as CNN, the New York Times, and Politico, which he labeled as being “fake news.” Cernovich claimed that most major news sources report inaccurately and that alternative forms of journalism, such as live streams, are the future.

“To be a great journalist, as I am, you have to be fearless because people are gonna hate your guts,” Cernovich said.

Following the conclusion of Cernovich’s event, protesters gathered around Lerner and waited at the Broadway entrance. Nearly 20 police officers, many holding plastic handcuffs, watched over protesters who shouted anti-police slogans.

Earlier this week, the Black Students’ Organization called on the Student Governing Board to defund CUCR and encouraged all students to sign their names onto the open letter in support. Columbia College Student Council also voted to submit a report of general concern against CUCR to the Student Conduct and Community Standards after a lengthy discussion during their weekly Sunday meeting.

“The most marginalized students among us are the ones who need the most protection,” protester Indira Martinez, a student at the School of Social Work, said. “I’m Latina and I’m from Puerto Rico. Having Mike Cernovich speak here on this campus is giving a platform to voices that say that my existence is not worth protecting, that the hate speech that these people are spewing is OK.”

Cernovich exited Lerner through a back entrance after the event. As he was escorted to his car by NYPD officers, a handful protesters ran toward him, shouting “fuck off” and “shame.”

As Mike @cernovich walked into Lerner Hall Monday night, a protester yelled, “Fuck you. No one wants to hear it.” It would suffice to say that @columbia University College Republicans’ #FreeSpeech Month has incited campus wide debate about who should be allowed to speak at Columbia and how students engage with controversial speakers. While Cernovich spoke largely uninterrupted as he took questions from the audience, more than 250 students and community members broke through Public Safety barricades outside Lerner, where they gathered to protest his speech. Swipe right to see more photos by @kaliajduffy , @triplefilteredphoto , and @katherinegerberich and read our coverage online.